'Differences are very good for negotiations'

Madan Pillutla teaches organisational behavior at London Business School and is a visiting faculty at the Indian School of Business. He specialises is negotiation - an art that is practiced daily, but seldom given the importance it deserves.
N. Madhavan | Print Edition: Jan 19, 2014 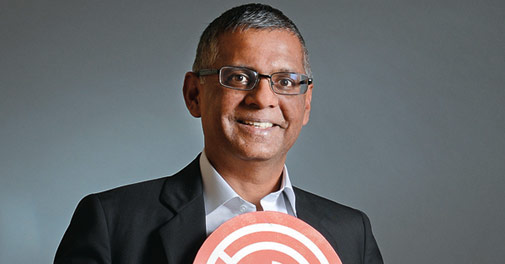 Madan Pillutla teaches organisational behavior at London School of Business and is a visiting faculty at Indian School of Business. He specialises in negotiation - an art that is practiced daily but is seldom given the importance it deserves. He met N Madhavan on the sidelines of BT's MindRush event, at which he was among the speakers. Edited excerpts from the interview:

Q. Research has shown that not knowing the art of negotiation raises chances of failure by 60 per cent. Is negotiation that critical?

A.Negotiation is critical to success in whole variety of professions. It is both an art and a skill. Almost every person at the top of an organisation is a skilled negotiator. He or she would not have reached that position without being a good negotiator. Resolving conflicts between two colleagues, trying to get more for your department or selling an idea which you feel will help the organisation is all negotiation. We typically tend to think of negotiation as haggling and bargaining but it is much wider. It gives an organisation competitive advantage if it has people who are good at negotiation.

Q. Is it recognised as a core leadership and managerial skill in the world of business?

A. Very much so. There are at least three indicators. Negotiation courses are the most popular courses in management schools. The number of books on this topic is another indicator. Go to any airport store and you will find that at least 25 per cent of the management books on the shelves are on the topic of negotiation. The third indicator is the scholarly attention being paid to it over the years. People recognise this as something important not just in business but in life. For politicians, prime ministers, presidents and diplomats this is a very important activity as they resolve problems around the world.

Q. Is enough importance given to this skill during recruitment?

A. No. It is not part of any kind of formal evaluation process. It should be. It gets captured partly by people talking about how they get along with others, their problem solving abilities and so on. Those are elements of good negotiation. Certainly, negotiation must be at the top of selection criteria for lot of positions.

Q. Are we born negotiators or is it a skill that is acquired?

A. It is both. I have two daughters and the younger one is clearly the better negotiator. It is not that we have done something different for her. Does it mean the older one will not become a better negotiator? I believe she can be, and that is the basis of lot of the courses we have. These courses are just making people aware of various elements of negotiation. Will such people become as good as born negotiators? Maybe not, but they can get very close to them. At the same time if born negotiators don't learn certain skills, their efficiency goes down.

Q. What are the core principles of negotiations?

A. The fundamental principle of negotiation is that you must be prepared. You need to know what it is you want. If you are not prepared, you don't know what you want. Part of the preparation is getting to know what the other party wants - after all, negotiation is all about give and take. The second principle is that we should go into any negotiation believing that things are negotiable. The third principle is you should conduct yourself with civility. You must trust and respect the people you are negotiating with. They are there to represent their interests and you need to recognize that. The fourth principle is that negotiation is really problem solving. It is about us discovering common interests that we can resolve or differences we can take advantage of. It is ironical but true that differences are very good for negotiations. I want X and you want Y; great, we can do a deal. Differences are what we want to get to and commonality will help us get there.

Q. It is often said that a good deal is one where both parties think that they have won...

A...Or at least think they have lost equally. No one party should walk away with a much better deal compared to the other party. Such deals tend to be unstable. Take the case of Enron in India. Enron struck a great deal from its point of view because it had political leverage and got central and state governments to agree to all sorts of conditions. But it did not take long for the deal to unravel.

Q. What are the negotiation traps that corporate should typically avoid?

A. Escalation is the first trap. If you are looking at buying a company and there are multiple parties interested in that company, you may end up paying a lot more money than you should have simply because you have got into the negotiation. I call this an agreement bias. The goal of a negotiation is a good outcome, not an agreement. The other trap is lack of trust and this is important in the Indian context. Indians tend to be cynical in the way we conduct ourselves. There could be many reasons for that including the fact that we are a developing country where there is a lot of poverty and so on. But we are losing out on the benefit of not taking things at face value. Trust is the lubricant that makes people interact effectively. If general levels of trust are improved, it will help us tremendously.

Q. Which are the most successfully negotiated business deals in recent times?

A. Satyam-Mahindra is a fantastic deal. It was an opportunity. Mahindra did a huge amount of preparation. Lots of negotiation took place as governments and regulators were involved and both parties benefited from it. Another one was the way Rajiv Bajaj handled the recent labour issue. It was the clear articulation of a principle. He made it clear that the company was not going to give shares away for free as no one, not even the chairman, got them free. This was a statement anyone could verify. The labour union accepted it after some difficulties along the way. What is brilliant about it is that, at the end of the agreement, Bajaj did not hold a press conference and brag about his success. India's recent success at WTO is another brilliantly conducted deal.

Q. Which are the business deals that were done badly?

A. The world is littered with mergers and acquisitions that have failed. The most famous is the AOL-Time Warner deal. People consider it one of the worst deals ever made in every aspect. The Chrysler-Mercedes deal was another one. In India there are instances of forays into the wrong business. Kingfisher and its entry into the airline business was a disaster.

Q. What makes companies do such deals?

A. Such deals happen when one does not know what one really wants. So one overpays. The second thing is wishful thinking. There is a Warren Buffett quote which is 30 years old and is perfectly true even today. He said a lot of times those going into a deal think everyone else is seeing a frog but they are seeing a prince. They think others are idiots and kiss the frog. It turns out that no matter how many times they kiss the frog, the frog is remains a frog. Finally, it is the unknown. Leaders operate in the dark. They take risks and sometimes they fail. Companies that have strong evaluation processes do better. In India, the Tata group is a good example of a company that has strong processes. The Tatas have acquired companies across the world. They have seen success as well as failures but on average they have done well.

I don't know who Rahul Gandhi is: Sadhguru Jaggi Vasudev

There was no leadership without courage: Murthy