The fourth edition of the Business Today-YES Bank Best CFO awards recognised India's best financial brains, who kept their companies' finances thriving despite the uncertainties of the past year.

Dearton Thomas Hector
The past couple of years have been difficult for Indian companies. High interest rates, a volatile rupee and a slowing economy have made them cautious. In such times, the role of the chief financial officer has become even more crucial. He has to manage debt, cut costs, ensure adequate working capital, and remain profitable. The fourth edition of the Business Today-YES Bank Best CFO awards recognised some of the financial wizards who successfully managed these difficult tasks in an uncertain environment.

Months of anxiety around these prestigious awards culminated in an exciting evening on June 3, when the winners' names were declared at a glittering function at the ITC Maurya hotel in New Delhi. Anand Sharma, Union Minister of Commerce & Industry and Minister of Textiles, gave away the awards. Addressing the gathering, Sharma recalled the global financial crisis of 2008 and said emerging economies such as India and China had been better placed at the time to implement stimulus measures. "We came out of that crisis. We thought we had come out. It was a mistake because no even recovery has taken place in the world and it will take a while for the economy to go back to the pre-crisis level, both from the growth perspective and the flow of capital," he said.

Sharma listed the government's priorities - creating jobs, returning to high growth, controlling the current account and trade deficits, and boosting manufacturing. He noted that agriculture sustained 58 per cent of India's population and the country also needed to expand manufacturing. "Services are not going to get us the jobs. Beyond a point, services can only grow on the strength of manufacturing and that's where the jobs will come." He said if 18 industrial cities came up in India, the country could become the manufacturing hub of the world. 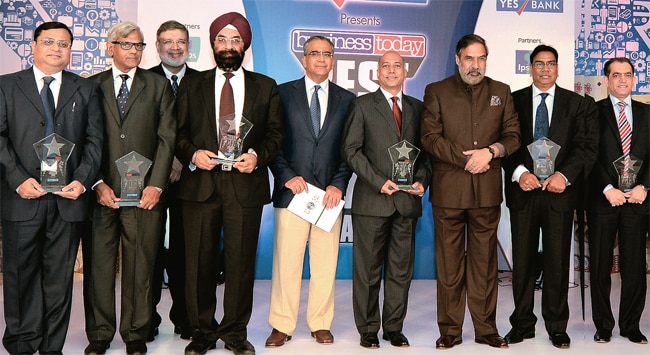 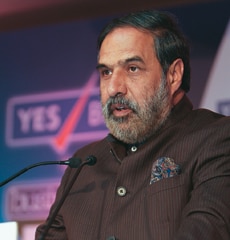 Anand Sharma, Minister of Commerce & Industry, and Textiles, addresses the gathering
Business Today Editor Chaitanya Kalbag briefed the audience about the process followed in choosing the best CFOs. He read out a reader's comment on the magazine's website about last year's CFO awards. "Nine among 10 of us take the winners of such awards as predefined. It's the system we live in, that we have lost faith in. But thanks to the details in this particular special award, we have respect for Business Today awards," goes the comment. This comment, said Kalbag, showed "how impartial and rigorous these awards are". 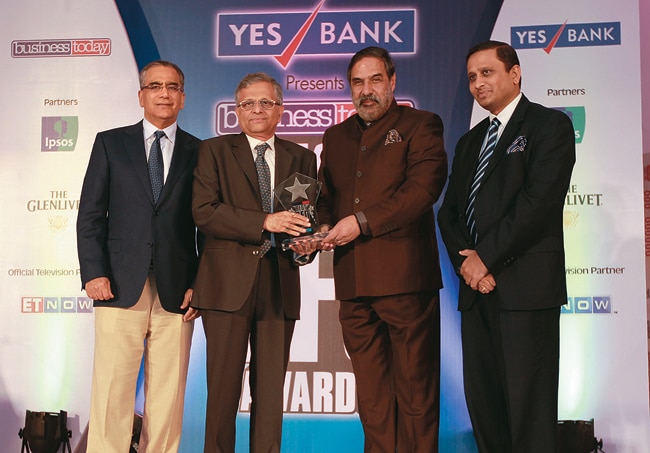 ITC's Rajiv Tandon accepting the Best CFO award from Anand Sharma, flanked by Aroon Purie (extreme left) and Amit Kumar of YES Bank (extreme right)
The CFOs were awarded in 16 categories this year compared with 14 last year. YES Bank was the knowledge partner and executed the methodology. Speaking on the occasion, Amit Kumar, Group President and Country Head, Corporate and Institutional Banking, YES Bank, said: "In the complex Indian economic scenario, a CFO's role has transitioned from the traditional functions of controlling the finance and accounts of the organisation to being core to the execution of corporate strategy."

The prize for the best overall CFO went to ITC's Rajiv Tandon. He also won in the category of 'Sustained Wealth Creation' for large companies. Tandon said growing an organisation required team effort. "Creating shareholder value is a result of ITC's superior strategies. We have a relentless focus on value creation and financial discipline. We don't just look at the market share of our products. ITC believes in market standing." Container Corporation of India's P. Alli Rani, the Best Woman CFO, shares her views with the audience
P. Alli Rani of Container Corporation of India received the Best Woman CFO award. Rani said when she asked the organisers why they have a separate category for women CFOs, she was told the aim was to motivate more women to join the world of finance. "I should tell the ladies out there that we are getting well paid for something we have been doing all our lives at home - managing funds," she said to thundering applause. "I look forward to the day when Business Today will institute a Best Male CFO award."

A.K. Mukherjee, Director (Finance) and CFO of Exide Industries and a winner of Best Transformation Agent (large companies) award, said his company had grown at a "stupendous" pace over the past 10 years. He said the company had transformed itself from an automobile battery maker into a power storage device manufacturer focusing on several sectors.

The survey partner for the event was Ipsos India and event partner was Glenlivet.