The CEOs unanimously agreed at Business Today's CEOs lunch meet in Mumbai that this is the best time to revive the animal instincts in Indian businessmen. To get the economy going, the crying need is to step up investments.

In his book The General Theory of Employment, Interest and Money - published in 1936 - John Maynard Keynes had talked about 'reviving animal spirits': bringing back optimism to a depressed economic environment. He believed that if both consumer and business sentiments were positive, consumers would spend more, thereby helping businesses thrive. When Prime Minister Manmohan Singh briefly took charge of the Finance Ministry in mid-2012 (the then finance minister Pranab Mukherjee had stepped down to contest the Presidential election), he too had recalled Keynes's famous remark.

Business Today's CEOs at Lunch meet held at the ballroom of ITC Grand Central in Parel, Mumbai, on November 22, the discussion, moderated by BT Executive Editor Suveen K. Sinha, harked back to Keynes as well. The subject was Reviving Animal Instincts: The How-to Prescription from India's Business Capital. There could be no better time than this to revive the animal instincts in Indian businessmen, the CEOs unanimously agreed over an eclectic spread of Indian and continental cuisine, the highlight being Hyderabadi mutton biryani. Positive outlook: (Standing, from left): Sanjay Sinha of Citrus Advisors, Axis Capital's Nilesh Shah, BT Executive Editor Suveen K. Sinha, Food Bazaar's Devendra Chawla, IDFC's Vikram Limaye, and Somasekhar Sundaresan of JSA Associates. (Seated): Boston Consulting Group's Abheek Singhi, Ranu Vohra of Avendus, Puneet Chaddha of HSBC Asset Management India, and PwC India's Deepak Kapoor (Photographs by Danesh Jassawala)
But to get the economy going, the crying need was to step up investments. Gloom surrounds the economy, what with gross domestic product (GDP) growth already down to a decadal low of five per cent in 2012/13, further falling to 4.4 per cent and 4.8 per cent in the two quarters since. So too the risk appetite of investors is at a nadir and brand India is fast losing its sheen.

Puneet Chaddha, CEO at HSBC Asset Management India, lamented a lost opportunity. He pointed out that during the global financial crisis in 2008/09, India's fiscal deficit was just 3.5 per cent, as opposed to 6.5 per cent today. "However, during that time - unlike China, which channelised its money into manufacturing - in India, a lot of money was made available to individuals for consumption. When the world was in crisis, we could have used the opportunity to become a manufacturing economy. Now when we are in a crisis, we don't have the resources to kickstart the economy. When the money supply became difficult, investments that were slow, vanished."

Vikram Limaye, Managing Director and CEO at IDFC Ltd, felt investments could be triggered by making some tactical picks and trying to revive business sentiment on the back of them. It could be, for instance, choosing certain projects which have done extremely well. "We need to build a case for outsiders to invest. For this, we need to encourage our own investors, too," he said.

Abheek Singhi, Partner and Consultant at Boston Consulting Group, supported Limaye. Singhi claimed consumer confidence in China and India was the highest in the world. Almost 80 per cent of Indians believed their lifestyle would get better in the next three to five years.

"However, government and business are getting into self agitation mode, influenced by the constant feed of negative reports about the India growth story in the press. This is creating a sense of despair," he added. He said that to change perception one had to first change reality.

"Indian consumers by and large don't understand macro-economic problems. There have not been that many salary cuts so far that they would want to downgrade from their brand of shampoo or detergent. However, when they see so much volatility such as onion prices shooting up or the stock market crumbling, they panic and tend to stop spending," said Devendra Chawla, CEO at Future Group's Food Bazaar, pointing to the recent Nielsen report which showed FMCG consumption to be at an all-time low. 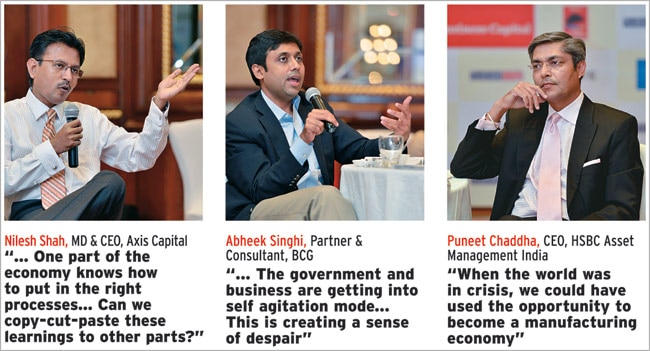 The CEOs called for strong leadership at the Centre, hoping in particular that the next government would take strong legislative steps to revive the country's image as an investor-friendly destination. All the CEOs were eyeing the upcoming general elections in May next year, though the jury was divided on which party - the Congress, the BJP or a third front - would be able to give the much-needed boost to the economy.

Ranu Vohra, CEO at Avendus, said that the capital market could play an important role in economic revival. He referred to initial public offerings (IPOs) - such as that of Twitter in the US. "We have to give opportunities to companies to hit the capital market. Unless people see money being made, sentiments can't be revived." He also stressed on the need for the banking system to be much more supportive and inclusive. "Banking has to look beyond the top 30 to 40 top companies. The medium and small companies have to be encouraged to grow."

and not the private sector's to make the first move to fix the outstanding issues. Many harped on the need of a few marquee financial policy announcements. Nilesh Shah, Managing Director and CEO at Axis Capital, said solutions existed and were very much possible.

"Over the last 15 years, the telecom industry has brought down the prices of services and products significantly. The prices of colour televisions have dipped over the last 20 years. This shows that one part of the Indian economy knows how to put in the right processes and control inflation.

Can we copy-cut-paste these learnings to other parts of the economy instead of learning from China?" It was food for thought for the policymakers, indeed, as the CEOs finished their lunch. Sanjay Sinha, CEO at Citrus Advisors, and Somasekhar Sundaresan, Head, Securities Law Practice, JSA Associates, also took part in the event.