Greenfield investments are vital to create jobs in the states. And some states are better at attracting investments than others. The government of Tamil Nadu plans to attract investments worth Rs 10 lakh crore and create employment opportunities for 20 lakh people over the next four years, Tamil Nadu Chief Minister Edappadi K. Palaniswami said. Speaking after giving away the Business Today Business Leaders of the State (BLoS) awards in Chennai on February 16, the chief minister announced two policies - The New Industrial Policy 2021 and Micro, Small and Medium Enterprises (MSME) Policy 2021 - to help achieve this target. "These new policies aim to provide further impetus for emerging sectors such as renewable energy, high-end manufacturing, food processing etc. More emphasis has been laid on the fields of innovation, research and development," said Palaniswami. He also pointed out that in the last 10 years the state has attracted investments to the tune of Rs 6.85 lakh crore. "Over 81 per cent of MoUs signed during the global investor meet 2015 and 2019 are in advanced stages of implementation," he added. The new policies include special incentives, including subsidies on land cost, transport and refund of state GST levied on capital goods for foreign direct investments (FDI) flowing into the state in the next one year. In addition to the BloS Awards and the announcement of the new industry policies, the mega conclave also saw foundation stone laying and inauguration of projects and announcements of investment commitments by private companies in the state.

The chief minister said the winners of Business Today 2021 awards have excelled in creating jobs as well as starting their ventures in industrially backward areas. Awards have also been given to entrepreneurs who are leaders of industry and have risen to prominence through sheer hard work and dedication, he said. 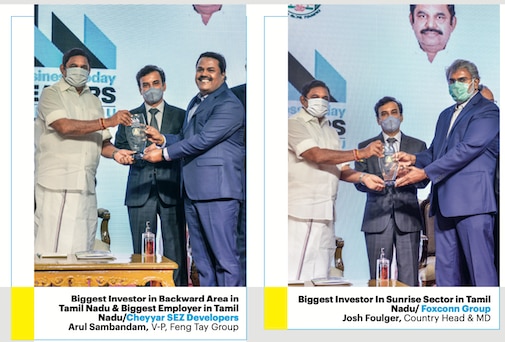 Earlier during the day, Business Today along with the state government organised a power packed panel discussion on the "Emerging sectors in Tamil Nadu - Pathway towards India's $5 trillion economy".

Speaking at the panel discussion, N. Muruganandam, Principal Secretary, Industries, Tamil Nadu, said the new industrial policy will give a big thrust to the emerging and sunrise sectors like ESDM, renewable energy component manufacturing, electric vehicles, EV cell and battery manufacturing. Sectors such as aerospace and defence, pharmaceuticals, petrochemicals, technical textiles etc were also highlighted. K. Shanmugam, Ex-Chief Secretary, Tamil Nadu, called for a targeted and massive intervention in the field of skill development. The second challenge is to make the transition from conventional sectors to being the destination of choice for industries of future economy, he said. Josh Foulger, Country Head and MD, Foxconn International Holding, India, said the policy push towards Atmanirbhar (self reliant) Bharat is what will make a difference in Tamil Nadu. The growth prospects offered by a combination of automotive industry and electronics sector will be the key driver for this, he said. Vivek Partheeban, COO, Caplin Point Laboratories Ltd, said there is enough headroom for Tamil Nadu to grow in the area of healthcare. It is all about differentiation, he said, adding, pharmaceuticals and healthcare is always evolving and provide scope for that differentiation. Gopal Srinivasan, Chairman and MD, TVS Capital Funds Ltd said the digital economy will lead the way. With its vast education system, its long history in IT services, and with its iconic academy industry connections, which is symbolised by India's largest research park in IIT Madras, we are in a very strong place. Francisco Betti, Head, Shaping the Future of Advanced Manufacturing and Production, World Economic Forum, said Covid-19 has been a perfect storm that brought in new challenges and also a unique window of opportunities. According to him, the launch of a new industrial strategy could not have been more timely as the perfect storm has been forming even before Covid due to mega trends such as Fourth Industrial Revolution, climate change and geopolitical developments. Companies world over are rethinking their manufacturing base and supply chain footprint and Tamil Nadu stands to gain, he said. Preetha Reddy, Vice chairperson, Apollo Hospitals Group, said there is potential in all three areas - services, manufacturing and the digital space. "The Prime Minister's announcement on how healthcare has to reach every Indian opens up the space for services, for digitisation, and for manufacturing. There is huge scope. It is also going to provide a minimum of one million jobs year-on-year, if we get it right," she said.

Madan R. Krishnan, Vice president and Managing Director, Medtronic India, said Tamil Nadu should leverage its biggest asset - human capital - to attract investment. "Every country is in a race to attract investments. We should look at segments where we can differentiate using the human capital. Technology can be a factor that allows you to leapfrog and you need to play a much bigger role in the global value chain," Krishnan said. S. Christopher, Ex-chairman, DRDO, wanted Tamil Nadu to focus on aerospace sector as it tightly fits into the Make in India, make for the world mantra. "If we can produce for the world from Tamil Nadu for the automobile industry, a good many parts for aerospace industry can also be made," he said. Christopher said military manufacturing has got demanding requirements, high margin, though low volume. The changeover of the automobile industry to electrical vehicles can be utilised for military products, he felt. Semiconductor fabrication is another sunrise sector, which he wants Tamil Nadu to look into.