BT-Honda Pro-Am of Champions hits the road for the 17th year.

The oldest pro-am in the country - BT-Honda Pro-Am of Champions - hits the road for the 17th year.

R.P. Chander, Principal Secy, Haryana, winner in the 11-18 handicap category
With the air getting nippy in northern India, a new season of golf tournaments has begun. It was a languorous Saturday morning, October 15, when the prime movers of the corporate community in Chandigarh converged at the Panchkula Golf Course, or PGC, for the inaugural event of the oldest and most popular Pro-Am in the country. The 2012 Business Today-Honda Pro-Am teed off with a full house of participants. 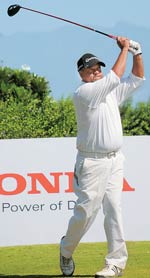 Darvesh Kumar, General Manager, Tata Teleservices, member of the winning team
It was a first for the 135-acre PGC and the club was primed to pristine shape to host the northern zone leg of the tourney. The only other time the event was held in this city, the Chandigarh Golf Course played host. Not surprisingly, the participants made the most of the benign weather and the true roll of the ball on the greens. "This is a very well-maintained course, beautiful surroundings, perfect golfing weather and above all, a superbly organised tournament," said Brig. R.S. Dagar (retd). "The lunch fare, the prizes… everything is up there with the best." He added that passionate golfers did not have to necessarily win to enjoy the tournament.

Ravi Verma, a marketing professional, said the tourney was an opportunity to play golf, meet people, and enjoy good food and drinks. On his chances, he said: "You can't play golf just like that. We professionals find it difficult to find time for practice. It also depends a lot on the day's golf." Peter Rohan Malik, representing The Address Group, with S.P.S. Matharoo who won the surprise trip to Dubai
After a fiercely-contested battle among the better players in the draw, Rakesh Jolly emerged as winner in the 0-10 handicap category, with a commendable 41 points to qualify for the National finals. Joining him were R.P. Chander and Anil Gulati, winners in the 11-18 and 19-24 handicap categories, respectively. Both played out of their skins - and seven shots better than their adjusted handicaps! - to tally an impressive 43 Stableford points each.

Jolly was elated with his effort. "The greens were perfect and my putting was great," he said. "It was difficult to drive straight because of the prevailing wind. I had a great birdie on the 5th." Jolly is no stranger to competitive sport - he played first-class cricket, and was introduced to golf by none other than cricketing icon and scratch handicapper Kapil Dev. Ravi Verma and I.P.S. Mann, members of the runners-up team, with Rakesh Sidana, Zonal Manager (North), HSCI
R.P. Chander, Principal Secretary, Sports Ministry, Haryana, acknowledged it had been an exceptional day for him on the green. "On a lucky day, all your shots go exactly as you visualise them. The longest drive at the 8th hole was the special shot of the day for me," he said. The quartet of Darvesh Kumar, Nirupti Bhalla, Ranjiv Dahuja and Harinder Singh Chehal tallied 117 points to bag the team honours. Coming in second was the team of I.P.S. Mann, Amarinder Brar, J.S. Rathee and Ravi Verma with110 points. The teams were selected randomly, which added to the fun quotient of the tournament.

The results were announced over lunch by Vipul Hoon, General Manager (marketing), Business Today, and awarded by Rakesh Sidana, zonal manager (north), Honda SIEL Cars India. The team winners won a trip to Dubai to stay and play golf at 'The Address', which is one of the sponsors of the BT-Honda Pro-Am of Champions. Peter Rohan Malik, business development head, India, The Address, felicitated the team winners. The coveted hole-in-one prize - a Honda CRV - went abegging as none of the participants managed to ace the par-3 4th hole. Rakesh Jolly, winner in the 0-10 handicap category, receiving the prize from Rakesh Sidana
ITC Hotels and Franklin Templeton Investments were the associate partners, while equipment partners PING gave away gloves to the winners at an on-thespot contest (closest to the pin) on the 2nd hole. Spirits at the event were kept flying high by Ballantine's. Neo Sports was the TV partner for the event, while Golf Digest India, as always, remained the official magazine partner.

The all-new Honda Brio: On display at the venue
The forthcoming legs of the tourney will be held in Kolkata, Bangalore and Mumbai. The National finals are scheduled for the first week of March 2012. The action now shifts to Kolkata for the Eastern zone regional leg, which will be held on November 5.