Clashes between management and workers in India are not new. Labour unrest at Maruti Suzuki, General Motors and Coal India, to name a few, has made news in the past. The industrial relations (IR) scenario, therefore, has become a critical component of management. One of the two topics discussed at the Business Today Knowledge Forum on Human Resources (HR) was how equipped are today's HR managers to handle industrial relations? Held at The Park hotel in New Delhi on January 21, the event was moderated by Shamni Pande, BT's Senior Editor. Airtel's Karra said that every leader should have three people in the succession plan who will deal with the internal need. "It will also send a signal to the outside world," he said. He noted that people want to be leaders from the very beginning. "We [at Bharti Airtel] do have a programmed approach to creating young leaders. We go to B-schools seeking leadership qualities." 'In the financial services sector, a banker will turn around and say: 'I don't want to be a CEO, but a specialist or a CFO.' People take pride in the role they excel in', says Anuranjita Kumar, Citi South Asia
Max India's Dwarakanath said that while everyone cannot become a CEO, one can certainly have leadership roles in a company. "? Young leaders want no control but collaboration; not monitored, but mentored; not critiqued, but coached?" He pointed out that even a traditional firm like GSK has changed its mindset, and is now supporting young talent. GSK's Sehgal chipped in: "If you can find youngsters with the right skill sets and maturity for leadership, why not take the chance?" He added that the young generation must accept that leadership doesn't mean becoming the CEO. "It means you are the leader in your function," he said.

Citi's Kumar shared a similar perspective. "In the financial services sector, a banker will turn around and say: 'I don't want to be a CEO, but a specialist or a CFO'. People take pride in the role that they excel in," she said, adding that getting 'fresh' talent job-ready - leave alone leadership-ready - takes time and patience. 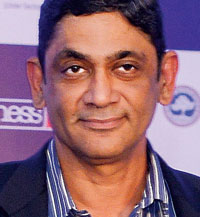 'Every leader should have three people in the succession plan who will deal with the internal need. It will also send a signal to the outside world', says Srikanth Karra, Bharti Airtel
Meanwhile, the CEO's role is seeing a paradigm shift. As Sehgal put it: "If you look at the job of a CEO a decade back and now, today's CEO is more of a commercial director. Today's CEO is not just a CEO, because there is functional specialisation besides multiple verticals."

Very few companies have articulated IR policies. Said Singh, who knows most of the HMSI employees by their first names: "Are organisations listening to the employee discontent? ? IR is context-based. What works at one plant might not work elsewhere... It has to be [based] on mutual trust. You need to be compassionate; you need to start talking to people one-on-one to address their issues, hear their discontent..."

Busrai was of the view that the unions of the future will form on social media, so "industrial relations has to get digitally savvy". He added: "IR is seen as a reactive function. If something happens, people go and fix it. We have to engage with people and proactively anticipate what's likely to go wrong." NTPC's Pani questioned the archaic practice of IR regulations. "What is the point [of] mugging up IR regulations and labour law clauses when there is no labour left in the country?" He suggested that management schools in the country should include case studies around IR issues in the Indian context.

PepsiCo's Basu and Max India's Dwarakanath noted that, lately, women HR managers are showing interest in IR roles. The latter narrated an incident on how two women HR plant managers he had recruited from XLRI Jamshedpur helped in resolving a protest by workers. On how to deal with unions, Dwarakanath simply said: "You need the art of 'tough love'. Be tough on issues but soft on people." Youth power: (From left) GSK Consumer Healthcare's Arun Sehgal, Bharti Airtel's Srikanth Karra, P. Dwarakanath of Max India, Anuranjita Kumar of Citi South Asia, Samik Basu of PepsiCo India, and Business Today's Shamni Pande
The second panel also discussed at length how IR is not just restricted to manufacturing units, but is now also moving into different realms and sectors across the MNCs, the services sector as well as white-collar unions. They were also of the view that talking to one's employees should be the first policy to solve any IR issue, besides equipping the line managers with more skill sets. Both sets of panellists concluded that the workplace is getting dynamic, and it is no longer about one-size-fits-all approach.