Mutual fund investing is a bit like marriage. A bad year is hardly the reason to quit. If you don’t consider divorce as an option when you begin, chances are your marriage will last.

One year ago, this column ran a contrarian view on mutual funds entitled, “When the tide ceases to rise”. I raised some disturbing ideas: “A bull market has the wonderful property of making ordinary investment managers look like geniuses” and “How many of these apparently gifted money managers will spot the first signs of a mega-shift of the economy into a downturn?”

And here’s the line that puts me up there with Nostradamus: “I find the combination of severely low levels of cash in equity funds, and (over) confident bullishness on the economic prospects of this (often blighted and blundering) country a little too unrealistic for my liking.”

Today, it certainly looks like the contrarians are one up on the systematic investors. Stock markets, not only in India but around the world, are staring at the spectre of recession. Not surprisingly, mutual funds have been hit, perhaps a little worse than what could be imagined a year ago. What’s happened in the interim? Has the tide turned? And if so, what should you be doing with your mutual fund investments?

Here’s some hard thinking by Boom & Bust that will, hopefully, answer these questions and restore some sanity to the way we look at mutual funds.

>Archive:First mutual fund guide
>Best Mutual Funds
>Where do I invest?
>Funds to weather the bear markets
>Art and science of asset allocation
>Build a fund portfolio
>The year of commodities
>Small towns, big investments
>Wrappers: Better than Ulips?
>FMPs for lower tax
>All you Want to Know about all funds
>Opportunity in times of crisis
>The right time to sell a fund 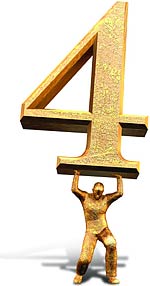 The world has changed...
Let’s face it. With oil at $125 to the barrel, there’s no way things will be the same again. Even if oil prices were to fall, the one time damage due to the oil shock (as also other commodities like iron ore and coal) will surely take many years to rectify. There’s no way the world can spend an additional 6% of its total income on buying the same quantum of oil, and not feel the pinch, even if it is only for a year.

Countries like India will face fiscal stress, and this will reflect in their currency movements. Our government will also find it difficult to fulfil national development objectives as the fiscal deficit balloons out of control. Off-balance sheet items like additional fuel subsidy, fertiliser subsidy, farmer loan waivers and extra wage costs will eat into the future prosperity.

Secondly, the tsunamis of cheap money have subsided. Money costs more today, and this affects PEs as much as it affects the earnings of all companies, especially those that are leveraged with debt. With central banks tightening the money supply globally, the only people left with any worthwhile cash surpluses are the oil exporters. And they are still not clearly telling us where they will put this money. Meanwhile, the US continues to grapple with the subprime credit crisis, further aggravating the tension in the financial and real economies.

And yet, the world hasn’t changed
In spite of all the pain, India continues to be a country with a growth potential that is staggering. China's position as the manufacturing base for the world has not changed. The new money surpluses (in the Middle East and other OPEC countries) are eager to find the next investment Mecca. If it were cheap Japanese funds and loose American monetary policy till yesterday, it is petrodollars that will chase investment themes and ideas today.

The world will, to a large extent, innovate its way out of the energy crisis by moving towards more efficient usage, alternative energy sources and, perhaps, even finding more oil from where none was expected. (Cairn and Reliance Industries will, in less than a year, add at least two percentage points to India?fs GDP from their Indian oil and gas fields).

1. Mutual funds are for long term
No matter how many times you hear this homily, you are not going to take it as seriously as you should. If your investing game is all about spotting the fund with the best returns and switching over every six months or a year, you will lose. Over time, the performance evens out. So a bad year with a great fund management house (or fund manager) is hardly a reason to quit. Mutual funds are a bit like marriage.if you don?ft consider divorce as an option when you begin, chances are that your marriage will last.

2. Choose greatness over punting
The emphasis on a great fund management house is intentional. Does your fund manager show this greatness in the way he (or she) picks and rotates stocks? The telltale signs include, but are not limited to, the following:

• Picking sector leaders in terms of size, growth, capability and return ratios
?• A studious avoidance of momentum stocks (the safety versus sexiness debate)
?• Moderate diversification (less than 50 stocks), especially in a large-cap fund
?• Low, but regular churn, especially with non-core holdings
?• A consistent approach, as elucidated in their portfolio and market reviews

3. Persist, but don't be suckered
Even the best fund managers have a bad year. And, at times such as the present, everyone might have a bad year. As a mutual fund account-holder, you should be able to distinguish between a bad year that is an exception (in an otherwise impeccable record), and a bad year that?fs routine. You will also find that the really great fund managers are those who lose lesser in bad years, although they might not outperform during good times. By all means, persist with this breed, even if their performance in the recent past has been uninspiring. But don?ft make the mistake of being fooled by a worthy candidate in the opposite category just because you made an extra buck during easy times.

4. Believe in equities
Finally, you really must have that conviction in the asset class called equity. Remember, that in the long run, equities are slaves of earnings. If you think businesses (especially the listed ones) are going to lead the world into innovation, growth and wealth, you cannot ignore the opportunity for wealth creation that equities offer. And what better way to reduce risk than by investing through mutual funds?

Dipen Sheth Head of Research, Wealth Management Advisory Services. He can be reached at dipen@wealthmanager.ws