Many are worried about valuations but the best is yet to come.  Only a tiny portion of FII investment has come in.

India had its first true bull market in equities between 1979 (Sensex 100) and 1992 (Sensex 4546), followed by a decade of consolidation. Post 9/11, I veered around to the view that the markets, after having gone nowhere for a decade, had surely bottomed. I also believed that the next big bull market for Indian equities was round the corner.

I expressed my thoughts in an article in The Economic Times titled “India—At the threshold of a Structural and Secular Bull Market” in June 2002 when the Sensex hit 3000. The markets have vindicated my views thereafter. People often wonder what led me to this view and why my conviction in India and Indian equities is so deep rooted. Most people now know me only as a bull, forgetting that some of my best calls in the market have been as a bear.

I generally judge things from a very broad perspective with respect to my trading and investments. And I have applied the same broad perspective here. My limited study of prosperous societies has made me realise that sustained prosperity of societies carries only three key parameters: democracy, secularism and skill sets.

I have always believed that India has a deep-rooted democracy. This is demonstrated by the fact that despite no single party having a majority in Parliament for the past 17 years, all changes of Government have taken place by the due constitutional process.

The secular nature of Indian society is beyond question and flows from the intrinsic trait of tolerance of Indians. In addition, Indian skill sets are now being respected across the world. Like diabetes, I think there is something genetic about Indian skill sets.

These traits have fortunately coincided with favourable demographics and a savings explosion. The liberalisation programme was initiated in 1991, and its purpose was to dismantle the control era and to focus on a market-driven economy.

Liberalisation has led to a change in the Indian mindset—now efficiency has become the byword, capital allocation is driven by markets, and the customer has become the King. Liberalisation also coincided with India entering the most favourable phase of its demographic evolution (which still has a long way to go) and the consequent savings explosion. It was also aligned to a wave of globalisation around the world.

All this set the stage for India’s long-term economic growth, which has been demonstrated by the over 8% real GDP growth in the past three years. This growth is now giving us momentum, mass and confidence and is being recognised worldwide. With the confluence of the capital expenditure and consumption cycle, we may even reach double-digit economic growth.

Although many are surprised by the 8% growth and question its sustainability, I feel it is not only sustainable but will accentuate. This is because the growth is not based on cyclical factors but on structural one. It is a bottom-up growth rather than an imposed one. This growth is not just inevitable, it is also irreversible. 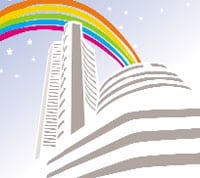 The history of markets has taught us that equity valuations are a slave of earnings, while the history of corporate earnings have shown that they are a derivative of the underlying economic environment. Our hypothesis is that the Indian economy will grow at a sustained 8-9% real rate of growth and will have normalised inflation of 4-5%. Hence our nominal GDP growth will be 13- 14%. We believe that India Inc. will grow faster than the unorganised and small-scale economic segments.

The basic paradigm of equity markets is that price is a product of earning per share (EPS) and price to earnings ratio (PE) or Price = EPS x PE. On the EPS front, based on the above hypothesis, we have a great deal of visibility. On the PE front, although most people are worried about valuations, I believe the best is still to come. While most people in markets are anxious about FII flows, I believe only a miniscule portion of the FIIs have really been invested in India.

Having said that, what most of us overlook is the quantum of domestic money that is going to enter the equity markets, which will eventually drive the markets far more than the foreign money. This is demonstrated by the charts below. The proportion of household savings being channelised into equity markets fell from 17.4% in 1992 to 1.1% in 2004-5, but rose to 4.9% in 2005-6.

In the context of a most modern electronic trading systems—full dematerialisation, effective regulation, improved corporate governance, favourable tax regime for equities, critical mass in distribution of financial products like mutual funds and insurance—I believe that this proportion will move inexorably higher towards 15% by 2010-11. With financial savings projected to be $300 billion by then, a mind-numbing $45 billion of domestic money should flow into Indian equity markets as against $6.5 billion in 2005. This will be aided by the gains investors make along the way, allowing them to forget the wounds of 1992 and 2001.

I have based my entire structural and secular bull market hypothesis on the factors outlined above. However, most people I interact with tend to be suspicious about this bull market and skeptical about the future. My experience has also taught me that when tectonic shifts take place, most people find it difficult to reconcile with the change. I think that is precisely what is happening at present. As has happened in most markets since times immemorial, I predict this disbelief will turn into a thumping frenzy to buy stocks at any valuations. Sometime within the next five years, I will be advising people not to buy stocks, and they will ignore and ridicule me.

This change is irreversible since most economic reversals are driven by lack of demand, over-investment and misallocation of capital, or political instability. Given India’s strong democracy and market-driven economy, I don’t see these risks occurring. Cyclical factors may slow down the bull market but the structural factors will ensure that it is not reversed easily. This unprecedented change in India is being slowly but surely recognised. The structural and secular bull market is alive and kicking. Market experience has shown that most bull market highs are higher than what we can imagine, and most bear market lows are lower than what we have feared. There is no reason to believe that it will be any different this time.