The year of the pullback

We need to take a macro call on the economy and markets before we take bottom-up, stock-specific calls. 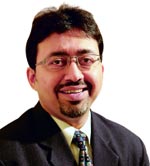 Dipen Sheth
Stock markets are good, but often capricious, teachers. If 2008 will be remembered for the bursting of the credit bubble, 2009 is surely the year of the tremendous pullback. As governments around the world rushed to take charge of failed businesses and economies, money flows quickly inflated most asset classes beyond the wildest hopes of injured investors. The Indian stock market has been a vigorous outperformer for most of 2009—from a low of 8,607 on 2 March, the BSE Sensex more than doubled to 17,326 on 17 October. Here are the two big lessons of this remarkable year.

Lesson 1: Some bad companies can be great investments.
There’s nothing like getting into a hi-beta story that nobody wants to believe. When banks around the world were falling, the last place they would have been expected to be willing lenders would be to overleveraged companies like Unitech and Tata Motors, right? Wrong.

These two worthies actually rode their luck and came back from the dead. On 2 March, Tata Motors’ shares closed at Rs 146, the price reflecting the severe stress that its leveraged acquisition of Jaguar and Land Rover was imposing on its balance sheet. But the company managed to raise fresh debt to repay a $3 billion bridge loan. Steel prices had cracked and the effect of cheaper raw materials led to a strong margin revival, even as volumes picked up in both passenger and commercial vehicles. The earnings before interest, tax, depreciation and amortisation saw a yearon-year growth of 85% in April-September 2009 to over Rs 1,065 crore. The stock price has, meanwhile, quadrupled to over Rs 600.

Unitech managed to raise money three times even as it recovered from a real estate price correction that threatened to wipe out its (highly leveraged) net worth. The result: Unitech quadrupled in the recovery interval when the Sensex doubled.

Lesson 2: Great businesses are (also) great investments.
Mark Rowan of Apollo Management recently said, “If you buy a fundamentally good business at a low price, you will ultimately make money.” In the auto sector, the firms that stood out were Hero Honda, Maruti, M&M, Bajaj Auto and Exide. All of them were tempting writeoffs when the global economy threatened to collapse, but falling steel prices and sustained demand combined to earn them record profits.

Banks suddenly turned into conviction buys in India as governments around the world printed more and more money. Money began to get ‘cheaper’ and although credit growth didn’t pick up, banks sensed an opportunity and scaled down deposit rates. The result: margins expanded and profits shot up. Not only did heavyweights like SBI, Axis Bank, HDFC Bank and ICICI Bank shine, but a host of NBFCs like PFC, REC and LIC Housing Finance posted multi-bagger returns.

In the capital goods sector, while Bhel doubled, midand small-caps like Cummins, Kirloskar Oil Engines and Bajaj Electricals turned multi-baggers, proving the old adage that the best time to pick a great company is when nothing looks right with the investing world.

If bad and good companies are both good ideas, what’s a bad investment idea? Herein lies the real lesson: we need to take a macro call on economies and markets before we take bottom-up, stock-specific calls.