Insects released by an Indian Council of Agricultural Research lab are saving crops worth crores.

The name National Bureau of Agriculturally Important Insects is intriguing at first glance. Self-explanatory at the second. Based in Bangalore, the laboratory affiliated to the Indian Council of Agricultural Research, or ICAR, has helped farmers fight deadly pests and save crops worth crores. 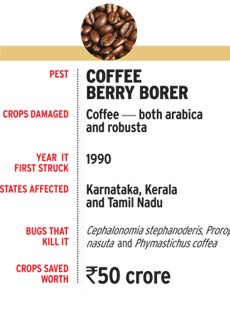 Click here to Enlarge
For 10 years A.M. Chinnarajan grew papaya on 15 acres of his 100-acre farm at Sathy, a fertile region 70 km north of Coimbatore in Tamil Nadu. Until 2008 he earned handsomely by selling wet latex drawn from the raw fruit to Senthil Papain, a firm that supplies the processed product, papain, to companies like Biocon, United Breweries, Colonac Breweries and some overseas ones for use in pharma, textiles, cosmetics and other industries.

Trouble began for Chinnarajan in mid-2008. His farm was part of the large tracts under papaya that were destroyed by Paracoccus marginatus, commonly known as the papaya mealybug. As the menace spread like wildfire, farmers lost hope and scaled down on papaya cultivation. R.J. Rabindra, Director, National Bureau of Agriculturally Important Insects
The latex sourced by Senthil Papain, for instance, dropped from 421 tonnes in 2006-07 to 162 tonnes in 2009-10 to a measly 20 tonnes in the first six months of 2010-11. "Three years ago we were extracting about 500 kg of latex a day and processing 20 tonnes a month," says company chairman O. Arumugasamy.

"Since the bug attacks, our daily collection has come down to 100 to 200 kg a day, while processing has dropped to three to five tonnes a month. The fruit quality also fell, affecting the food processing industry."

Enter the insects' bureau. It imported Acerophagous papayae, a tiny insect or parasitoid, which was found to successfully prey on the pest, from Puerto Rico. The parasitoid worked. It helped save not only the papaya crop in Karnataka - as well as in Tripura and Andhra Pradesh - but also rubber and tapioca in Kerala, and chilli and cotton in Andhra Pradesh, all of which had been affected by the mealybug. In all, around 70 different crops are vulnerable to mealybug attacks.

Click here to Enlarge
Hope is in the air and slowly farmers in the region around Coimbatore are returning to papaya. "I will revive the crop on two acres first," says Chinnarajan, holding up a test tube containing the pestfighting insect.

T.R. Thangavelu, a small farmer in the same region, who grows papaya on just one acre, had to spend an additional Rs 20,000 on chemical pesticides last year to save them after the mealybug attacked. But armed with the parasitoid this year he has cultivated papaya again - the plants are six months old now. "This year the insects have saved my crops," he says, adding that a good harvest will earn him about Rs 1.5 lakh.

The ICAR bureau distributes the Acerophagous papayae free of cost through the Tamil Nadu Agricultural University or TNAU. "By using the parasitoid, these Tamil Nadu farmers will save about Rs 50 crore which they would have spent on chemical pesticides," says P. Murugesa Boopathi, TNAU Vice Chancellor. "The harvest will also be free from harmful chemicals." In the past four months, his team has released 65,000 parasitoids in 300 villages in Tamil Nadu and is estimated to have saved crops worth Rs 500 crore.

Power pest: A farmer shows off the parasitoid Acerophagous papayae
The Acerophagous papayae is one of a range of parasitoids the ICAR lab has imported and distributed in states that reported large-scale pest attacks. It is the only laboratory in India that is allowed to do so. Tackling the pests is particularly difficult when they are alien to India and have been carried here by the wind or clinging to shipments and humans coming from abroad.

Since the papaya mealybug originated in Mexico, for instance, its deadly impact was not immediately recognised. Experts took little note of it until it started affecting the more lucrative mulberry crop too. Finally, R. Muniappan, originally from Coimbatore, an expert from Virginia Polytechnic Institute and State University, or Virginia Tech, identified it during a visit in 2008.

"Classical biological control is the only long-term solution to combat the bug,'' he says. Muniappan is part of the pest management team from Virginia Tech which is involved in such activities worldwide. The bureau has been involved in basic and applied research on biological control of crop pests and weeds since its inception in 1993, when it was called the Project Directorate of Biological Control. In 2005, when the woolly aphid pest hit the sugarcane crop in Maharashtra, Karnataka and Tamil Nadu, the ICAR lab acquired and distributed two parasitoids - Dipha Aphidivora and Micromus Igorotus - from Assam to combat it. "In Maharashtra alone we saved sugarcane worth about Rs 365 crore," says Director R.J. Rabindra.

In 2007, when the gall wasp attacks on the eucalyptus tree had all but crippled the paper industry, the bureau brought in the parasitoid Quadrastichus from Israel to fight the pest.

"Alien pests like the Brontispa longissima, or leaf beetle, in Myanmar and Maldives, and the Phenacoccus manihoti, or tapioca mealybug, in Thailand are immediate threats that could hit our crops too,'' says Rabindra. Preventing their entry is impossible, so the team is working on control mechanisms.

"The leaf beetle can destroy coconut, arecanut, oil palms and many other crops," says A.N. Shylesha, Principal Scientist at the bureau. The lab also trains scientists on how to breed and use the insects. "The need to save crops from pest attacks is critical for India's food security. Grain production is growing at only 1.2 per cent per annum, while population is rising by around 1.9 per cent," says S.K. De Datta, a director at Virginia Tech. While exact data is unavailable on the quantum of loss from pest attacks on crops, either globally or in India, agricultural economist George W. Norton says every dollar invested in integrated pest management by a research consortium led by Virginia Tech has returned $20 in benefits to producers and consumers.

International food prices have touched new highs in recent times and the effects of climate change are wreaking havoc on agriculture across the world. Given the repeated warnings by the World Bank and the Food and Agriculture Organization on the possibility of global food shortage, every grain saved from pests, it seems, is worth two produced.
TweetYoutube