Private sector manufacturing of defence equipment has boomed in the last three years. Now products are being made, not just components as before.
Suprotip Ghosh | Print Edition: Mar 2, 2014 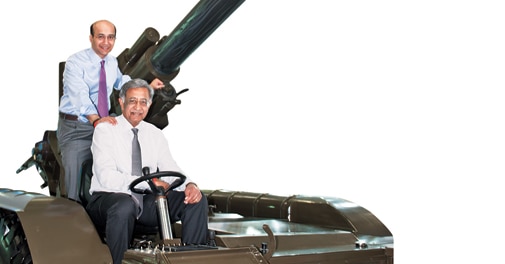 In 2012, Centum Group, a Bangalore-based provider of aerospace and defence electronics, broke into the select group of contractors supplying to US-based defence solutions provider Thales. Centum became the first Indian company to ink a sweeping pact with Thales. It can now supply directly to any of the 70-plus sub-groups that make up Thales's diversified business, from military communications in combat management systems for ships to integrated air defence systems for the US military.

Indeed, as the above examples illustrate, Indian private sector companies are making inroads in the defence equipment market - both globally and locally. For long considered a set of obscure contractors making small parts, Indian manufacturers are coming of age. "In the last three years, Indian private companies have developed adequate real capabilities," says G. Balachandran, Consulting Fellow at the Institute of Defence Studies and Analysis.

Besides Centum and Tata Power SED, several small companies - such as Dynamatic Technologies, Avasarala Technologies, DefSys, Ravilla and Taneja Aerospace - have in the past three years acquired advanced technological capabilities and are just a step or two away from creating whole systems, as opposed to parts.

Step by step
In defence contracting, there are three distinct phases of manufacturing. The first, "build-to-print", is the most basic capability. Here contractors manufacture according to designs provided by an external client. In 2010, 92 per cent of the private sector's order inflow in India was build-to-print, which requires the least technical proficiency. In 2014, experts estimate it to have shrunk to about 80 per cent of the orders.

The second, "build to specifications", is where the executor of the project can own intellectual property. Here, the client comes with an idea of a product, and asks the executor if it can be manufactured. Often, these products require developing new intellectual property that may belong to the Indian contractor. The third part is developing products from scratch, either to create new capabilities for a particular defence need or upgrade an existing product. Indian manufacturers have now started building capabilities in the second phase, say defence experts.

"In the last three years, the build to specifications part, which requires significant capabilities, has increased for India's private sector companies," says Rahul Gangal, Principal, Roland Berger Strategy Consultants. And that is where some Indian companies have started getting large value contracts.

Growing market
The Indian private sector is estimated to have a relatively small share - about five per cent - of the Indian defence equipment market. Some large volume contracts are with the nine defence public sector undertakings (PSUs), which account for about 20 per cent of the market. Over 70 per cent of the equipment needs is met through imports.

India's total defence imports were a mammoth Rs 40,000 crore in 2013 and it is a big domestic market for private companies to tap into, says Nidhi Goyal, Director, Deloitte India. More so, with the Indian government stressing indigenous development and self reliance in production in the defence procurement policy announced in 2013. Between 2004 and 2013, the government issued 209 licences to Indian companies to manufacture defence equipment domestically. The rate of granting licences has increased over the last five years, points out Goyal.

Globally too there is a big opportunity for Indian companies. This is partly due to the labour arbitrage opportunities in India. Indian companies have also developed the ability to manufacture accurately to specifications, particularly in aerospace, metalworking and electronics, say experts. Today, a $7 billion to $8 billion global market exists for the Indian private players, says Gangal. In 2011, private Indian companies exported defence equipment worth $2 billion, up from $73 million in 2007.

Indeed, in many ways the government's policy for the defence sector is similar to that of South Korea. The emergence of South Korea as a defence manufacturing powerhouse, particularly in naval defence and aerospace, is based as much on its industrial ability as its policy. In a planned way, the country has targeted niche segments and has managed to secure orders from partners overseas in areas where they need to develop expertise.

This has borne fruit. In the 10 months ending November 2013, South Korea exported $2.6 billion worth of arms, up from $250 million in 2006. This will further grow, since last year India alone signed a $1.2 billion contract with the Korean Kangnam Corporation for eight mine-counter-measure vessels, along with a transfer of technology condition.

Like South Korea, India is trying to ensure that more technology is either developed in India - particularly in select sectors such as aerospace - or remains in the country after the technology is imported and products designed or built.

Scaling up
Indian private companies are looking to make the most of the opportunity. The Tata group, for instance, has ramped up operations. Tata Power SED is the only company in India to have an in-house ballistic test facility, used to test ammunition. "Tata Power SED has the ability to design, develop, manufacture, assemble and upgrade mission critical systems in seven core areas of defence," says an emailed response from the company.

Tata Power SED is also a prime contractor for the Ministry of Defence for indigenous defence production. It has secured orders for Pinaka Multi Barrel Rocket Launcher, Akash Army Launcher and Integrated EW System for the Indian Army and the Akash Air Force Launcher for the Indian Air Force. Defence projects have a very high gestation period, says Centum's Chairman and Managing Director Apparao Mallavarapu. He spent between Rs 20 crore and Rs 25 crore in 2006 to set up capabilities for defence. It was then primarily a supplier to ISRO for its space programmes with annual revenues of about Rs 100 crore. In 2013/14, 25 per cent of Centum's revenues have come from defence and space projects. In the nine months ending December 2013, revenues were at Rs 313.4 crore. It was 10 per cent of Rs 257.4 crore revenues in 2011/12. "I had no expectations five to seven years ago," says Mallavarapu. Dynamatic Technologies, the Bangalore headquartered company which makes assemblies of vertical fins for Sukhoi 30 Mk-I fighter bombers, too has seen a robust growth in revenues of late - from Rs 51.72 crore in 2011/12 to Rs 64.66 crore in 2012/13.

Balachandran says Indian companies have taken big strides forward technologically in recent years and can now match international standards. But the problem isn't getting contracts. It is in doing original R&D, and thereby creating completely new capabilities. The Indian private sector can build over 80 per cent of the equipment required for naval defence and 70 to 75 per cent of the equipment required for the army, says Gangal. Most of these capabilities are concentrated in small and medium sized companies, adds Gangal. "Big boys aren't necessarily the bigger players in the sector. People don't go by name here. Federal conglomerates are not preferred," he says.