Now chances are that when someone suggests Taco Bell for a meal, the fine dining lover in you will turn up your nose at the prospect.

Now chances are that when someone suggests Taco Bell for a meal, the fine dining lover in you will turn up your nose at the prospect. Till now, the brand has existed in food courts and that's been India's first introduction to Taco Bell-style Mexicana. Yet now, they have launched their first restaurant space (if you can call it that) at the Epicuria mall in Nehru Place. The space has a typically fast food vibe with wooden furniture, a menu in big, bold letters up on display and music that is young and preppy.

There are a few differences though. In a first, the brand is serving liquor at this restaurant; there is beer and what is referred to as a 'twisted freeze' which is a combination of an icy flavoured slush and rum, tequila or vodka. You also have 'hard shakes' that are vanilla ice cream-based shakes available in flavours as varied as Jack Daniels with honey, vodka with Kahlua etc. Drinks aside, dig into the loaded Mexican chicken nachos which are crunchy, truly loaded and heaped with calories that taste so good. You cannot come here and skip a taco, so try the fajita chicken taco which is fiery but delicious, the taco thin and smart, loaded with goodness.

You also have a range of fajitas, burritos and quesadillas to choose from. The tikka masala burrito meal clearly caters to the Indian palate and has been put on the menu to woo the average Indian, but can be skipped as it fails to hit the mark. One would do well to stick with one of the other staples. For sides, the Mexican fries, liberally doused with a peri peri-type dust and slathered with sour cream and guacamole are highly recommended as they are fantastic. 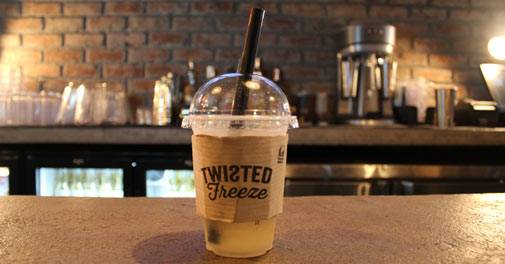 While one tends to steer clear of desserts at fast food places, don't skip the chocolate caramel tostadas and vanilla ice cream as they are reminiscent of a fine plate of churros that have been done right.

Given that the space is reasonably priced, it is likely to attract the younger lot looking to east some decent food at a decent rate (the addition of alcohol is a big draw). The menu is however limited and if you are over 30, chances are you will sidle in, get a takeaway and leave without much fuss. Recommended for those looking for fast food alternatives on the go that is high in flavour and easy on the pocket.