What happens when a delicate, elegant wine meets a Maharashtrian meal

Find out what happens when a delicate, elegant wine meets a rustic, robust Maharashtrian meal. 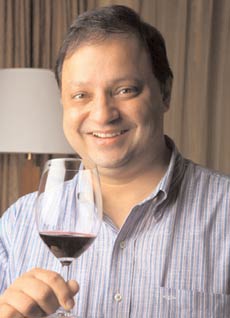 Sourish Bhattacharyya
Between the bhakarwadi and amba barfi of Chitale Bandhu and the authentic Maharashtrian thali of Shabree on Ferguson College Road, Pune offers excellent options for food. TV host and celebrity chef Nilesh Limaye, a proud custodian of the city's culinary traditions, recently initiated me into the secrets of the Maharashtrian table literally in the middle of nowhere.

We were about 100km from Pune in Sharad Pawar's Baramati, at a village appropriately named Roti. Here, United Spirits Limited has set up its Four Seasons winery and boutique hotel, rising amidst the barren landscape like a forgotten set of a spaghetti Western.

In the dining room we were expecting Cordon Bleu-type fare to go with the Ritu, Four Season's export market wine. Abhay Kewadkar, who along with Fratelli's Piero Masi has put Baramati on the world's wine map, picked the wines. Limaye, who resembles Lenin with his receding hairline, sharp eyes and goatee, surprised us by matching them with Maharashtrian food.

I was particularly struck by the ease with which the Ritu Shiraz Barrique Reserve 2010 paired with the mutton saoji, a Nagpuri gypsy dish. The saoji uses pepper and garam masala, so it doesn't get chilli hot, which suits nearly every wine. The medium-bodied Ritu also got along with the vegetarian alternative to the saoji- the bharieli vaangi, or stuffed baby brinjals tossed in an onion-tomato gravy.

Such discoveries abound when you set out to pair food and wine. The next day, we had sukka chicken, a coastal dish where the meat is cooked dry with coconut milk and spices. This we paired with a Ritu Chenin Blanc 2012. It seamlessly balanced the acidic foretaste and fruity or sweetish finish. The pairing with the kothimbir vadi (gram flour and coriander patties), though, was the day's biggest surprise. The vadi is intensely flavourful and the pairing was a match made in heaven.

The Maharashtrian table's hallmark is the rusticity of its offerings, yet there were many elegant pairings just waiting to be discovered. In the boonies of Baramati, we had a 'champagne' breakfast with an as-yet-unreleased sparkling ros and the Maharashtrian staples of sabudana khichdi and missal pao, a sprouted curry sexed up with chopped onions and a squeeze of fresh lemon, and served with the slightly fermented 'pao' that is so typical of Maharashtra. Believe me, it didn't take us very long to finish half a bottle.