Exploring the hedonist's rush of liquor and cigars Pininfarina
CHIVAS 18 BY PININFARINA
Can drinking and driving be used in the same sentence without somebody kicking up a fuss? Apparently yes, and that's what Chivas Regal 18 seems to have set out to prove. The whisky brand has tied up with Italian automotive design firm Pininfarina to showcase its fine blend of 20 rare Scottish single malts.

Chivas 18
Handcrafted at Pininfarina's workshop in Cambiano, Italy, the 18-year-old whisky's packaging is titled 'Drop', suggesting a sense of movement that is inherent to the automotive firm. However, the association really comes across through the metallic deep blue crestcase that mimics Pininfarina's swanky metalwork. Wood lies at the creative heart of both brands. Just as Pininfarina cars were traditionally built around wooden wireframes, known as mascherones, Chivas 18 is matured for eighteen years in oak barrels - giving the whisky its elegant golden hues and subtle flavours. To honour both brands, the interior is lined with a rich wood veneer. The spirit, comprising 85 flavours such as dried apricot and velvety dark chocolate, comes in two limited edition packs. While one is restricted to 1,500 pieces at $140, the other is available in 120 editions at $495 each. Connoisseurs can also order Pininfarina's showpiece, an eight-foot oak sculpture that can be used as a shelving unit for spirits. The firm has already recieved ten orders for this beauty that's being sold at $100,000. A regal choice, we say.


STOCK UP YOUR HUMIDOR San Lotano Oval
San Lotano Oval
An unconventional rocket-like structure leaves this cigar with steady notes of leather, wood and dried cherry. Sporting a toothy Habano 2000 wrapper and breathing in rich Nicaraguan and Honduran long fillers, San Lotano Oval is destined to be called a holy smoke. Accentuating and binding the flavours is a secret filler that's known only to the folks at Tabacalera Fernandez, Nicaragua. Intrigued enough to pick this one up, eh? Alec Bradley Black Market Filthy Hooligan
Alec Bradley Black Market Filthy Hooligan
Despite its raw street name, the cigar is a gentle beauty. Wrapped in a silky light green band, the newly released limited edition gives out gentle smells of sweet grass, hay and a touch of earth when you initiate it with a straight cut. It offers the smoker cold draws, with peppery flavours fading into the backdrop. A full-bodied smoke with delicate but rich notes is what you get. Montecristo, Double Edmundo
Montecristo, Double Edmundo
Officially announced at the 2013 Habanos Festival, the cigar's legacy is a tasting benchmark for other blends worldwide. With a ring gauge of 50 and a length of 155mm, the hand-rolled cigar has an easy grip and undergoes a slow and steady burning process. Believed to have a mild-to-strong taste, this makes for an hour-long smoke. This year's design has the new Montecristo band in a bigger size.

#1Rolling
The flavours depend on how the tobacco is positioned in filler and binder leafs. Hand-rolled ones are the finest.

#2Storing
The ideal temperature for a humidor is 64-70F (18-21C) as it maintains moisture and prevents worm attacks. 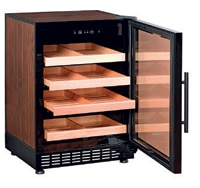 #3Cutting
Insert the head of the cigar into the guillotine and cut into the cap, usually about 1/16 to 1/8 of an inch down 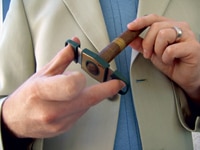 #4Lighting
Position the end of your cigar just above the flame. Keep puffing while turning it around gently.