In an exclusive tete-a-tete with BT More, UK-based celebrity chefs Anjum Anand and Vineet Bhatia share their culinary philosophy and the inspiration behind it.

Vineet Bhatia
Take a regular Indian; soak him in a melting pot of foreign cultures and saute with a general love for life. Then, sprinkle a spirit of freshness and leave to age on the world's most coveted kitchen shelves. In all probability, you'll create a chef who can break out of basics and get a little more out of Indian cuisine. If only gourmands like Anjum Anand and Vineet Bhatia could be prepared overnight. It's taken these London-based chefs years to simmer away the lumps of industry disapproval before they enjoyed watching the first boils of fame and success. And like great masterchefs, the stirring never stopped. They could have spent their lives garnishing tandoori tikkas and pairing red wine varietals with laal maas, but chose to appear on TV shows and earn Michelin Stars instead. In an exclusive tete-a-tete with BT More, they share their culinary philosophy and the inspiration behind it. Let's walk into these kitchens and see what's cooking.

Vineet Bhatia
London, 1993 A young Vineet Bhatia served a baked-and-frozen gajar ka halwa. It was spat out on his face for not being 'warm, gooey and the way it's supposed to be'. The only way to prepare international audiences for something different was by adding what he calls his 'twist'. "I changed the name of the dish to stall expectations and then gave it an offbeat presentation like colourful rice pyramids or capsule-shaped desserts. Over a cake of flavoured and spiced rice sits Vineet's delicately carved prawn
Finally, and most importantly, I twisted the flavours around by employing a global cooking style on Indian ingredients". London, 2012 Vineet runs a Michelin Star restaurant Rasoi that stands as an ode to his convictions. Here, you get paniyaram dumplings with lobsters and sundried tomatoes, barfi with chicken and chocolate samosas. Even a simple side dish like khichdi is turned into a flavoured risotto on Rasoi's menu.

For him, the only way to conserve India's dying culinary arts like Kashmiri wazwan is by re-inventing it with a burst of fresh flavours. So, on his show Twist of Taste, he heads out on an Indian food trail and reinvents local styles.

He describes his job as "igniting the flame for a discovery of India by surfacing hidden cuisines and rebuilding with fancy cooking techniques." Years later, when the world savours Naga food with Mexican spices and European seasoning, Vineet Bhatia will be one happy man. 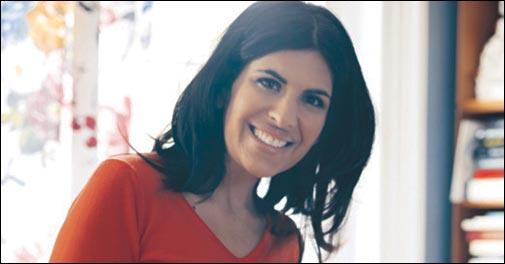 Anjum Anand
Anjum Anand
Like most Indians growing up abroad, Anjum searched for her Indian identity in tangible things, which, in her case, rested in her kitchen cabinets. She mixed turmeric and warm milk to cure fevers and drew on a certain warmth in the aroma of freshly ground spices at family gatherings. It was all hearty and happy, but never healthy. So, the chubby child of her foodie parents, who grew up to be a fat teenager decided to revisither kitchen for a solution, and found it right there.

She feels "Unlike European cuisine that relies heavily on butter, cheese and nuts, all Indian food needs is a dash of oil, that too only for cooking the dish. We draw our flavours from spices instead." And in her opinion, this the most important pre-requisite for healthy food. "People confuse spices with fiery chillies so Indian food is either branded as bland everyday or as rich and heavy retreats that grace special occasions." Yogurt, curry leaves and coconut oil are the main flavouring agents in Anjum's Southern Curry
It is this void that Anjum strives to fill with delicious yet light treats that one can fork into without worrying about tipping the scales. The trick is to make the chillies optional and blend the rest of the spices harmonious. On her BBC show Indian Food Made Easy, she used 12 pieces of garlic, some cumins, cloves and black pepper, and still struck a chord with British audiences.

The key, she feels, lies in breaking down the dish to the last ingredient and evaluating the effects of each. "Till recently, Indian restaurants abroad only served Mughlai, with deep fried veggies and spicy masalas. For instance, the Goan chicken dish vindaloo, a popular favourite in Britain, was a slapdash of spices and sauces and no one strived to understand its flavours in isolation".

Anjum advocates the evolution of food and feels that it needs to adapt to contemporary lifestyles. She draws on the organic science of ayurveda which was also the subjects of one of her six books, and comes up with fun recipes recipes. Instead of deep frying tandoori aloo, she hollows, marinates and stuffs with greek yogurt.

Similarly, her jhal frezi curry is packed with vegetables, immunity boosting pomegranate kernels, turmeric, ginger and garlic. In a world where everyone is hungry and there are only so many chefs, Anjum's simple food logic, that of quick-to-cook nourishing food, is here to make life easy, and longer.
Published on: Dec 11, 2012, 12:00 AM IST
Posted by: Navneeta N, Dec 11, 2012, 12:00 AM IST