In S. P. Jain Institute of Management & Research's (SPJIMR's) two-year full-time Post Graduate Diploma in Management (PGDM) programme, women comprise 41 per cent of the class of 2020. The B-school's gender diversity has always been exceptional, especially when compared to the global counterparts. In 2015, it was 35 per cent. According to accreditation agency AACSB International's Business School Data Guide, 39 per cent women got management degrees globally in 2017/18.

"We don't do anything special to attract women. The admission process is designed to look at a student holistically, irrespective of his or her academic background, to provide equal opportunity to all. Perhaps that works," says Ranjan Banerjee, Dean of SPJIMR, Mumbai.

SPJIMR, ever since it became autonomous in 1993, has admitted candidates on basis of profile-based short-listing. "The quality of a candidate can't be assessed just from their entrance scores," says Bindu Kulkarni, Associate Programme Head of PGDM at SPJIMR. She says candidates are initially shortlisted on the basis of their profile which includes not just the entranc test score but also elements such as work experience, academic performance, versatility and achievements (including co-curricular activities). They have two rounds of group interviews where they assess the candidate's conceptual and functional knowledge along with attitude and values. "Two rounds ensure wider participation in stage one, increasing the pool of candidates we evaluate for the final selection," says Kulkarni. To ensure fair selection, the school ensures that the pool of faculty is also diverse - half the lecturers in SPJIMR are women. 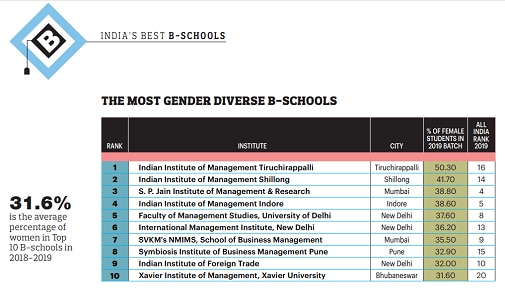 Fixing the gender gap has become a key area of concern for B-schools. One reason is pressure from recruiters, who have to meet diversity targets and so prefer to go to B-schools with substantial number of women students. It also brings in multiple perspectives and a diversity of thought in the class. "We are not seeing enough representation of women in MBA classrooms, so we are asking for more," says Gurunathan L., Associate Professor, XLRI Jamshedpur. In Business Today's list of Top 10 B-schools, SPJIMR takes the top slot in gender diversity with 41 per cent women, followed by IIM Indore at 38 per cent, FMS at 37 per cent and NMIMS at 35 per cent. The last four in the top 10 are MDI Gurgaon at 23 per cent and IIM Kozhikode, IIM-A and IIM-C at 26 per cent each.

XLRI has had close to 30 per cent women representation for the last three years. It is trying to connect with women colleges in non-metros and organising events to raise awareness about management education. This year, it even advertised on social media platforms. "We want to create different platforms where we can speak to more women," says Gurunathan.

However, this is not enough. There is a perception that the admission process of B-schools is biased towards those with engineering or quantitative skills, leaving behind students from other streams. This is also perhaps why a lot of women don't apply for management degrees. Data shows that women are under-represented in fields of Science, Technology, Engineering and Mathematics the world over. To fix this, institutes like Management Development Institute (MDI) and IIM-B give extra weightage to women applicants to provide them an opportunity to reach the interview stage.

"Our focus is on direct approach where we give incentives to women candidates at two levels during the selection procedure," says P. C. Biswal, Dean - Admissions, MDI Gurgaon. Women get 5 per cent more weightage. Then, non-engineers get another leverage of 5 per cent. "Not many women take up engineering, so this helps us ensure academic as well as gender diversity," says Biswal. This has worked for the institute. Before 2014/15, there were only 20 per cent girls in class of two-year post graduate in management programmes. Now, the percentage has gone up to 30 per cent overall. In the specialised post graduate programme in human resource management, 40 per cent of the students are women.

At IIM-B, five to 10 years ago, women used to account for less than 20 per cent of the class, but in the last two to three years, the figure has been touching 28-30 per cent. The class of 2020 has 37 per cent women. There are also schools like SVKMs NMIMS that have 30 per cent reservation for girls provided they meet the selection criteria. Last year, IIM Kozhikode announced 60 additional seats for women in its flagship post-graduate programme in management.

While some prefer direct incentives, ISB's focus is on building a women-friendly ecosystem. From 34 per cent last year, the representation of women has touched 39 per cent (in the class of 2020) at its two campuses in Hyderabad and Mohali. This despite the fact that in ISB, the average age of students is 25-27 years - this is the time when women are facing social pressures to get married, etc - due to the requirement of at least four years of work experience. ISB has built family friendly accommodation with facilities such as creche and day care and support staff to help with housekeeping, laundry, etc., said an ISB spokesperson. They also offer need- and merit-based scholarship for deserving women. For example, there is "Lakshya Scholarship for Women" by Bharat Forge. Firms such as AT&T and Hilti India reserve 50 per cent of their scholarship grants for women every year. There are also corporate partnerships such as the one with Axis Bank where the bank hires meritorious students from ISB under a 'Women Leadership Programme'.

However, regulatory support has its limits. Biswal of MDI says what is important is for the society to realise that women too are the future leaders and provide them equal opportunity in all spheres of life and work.

MBA is a huge commitment of time and money and society still expects women to take on full responsibility of the family even when they have a career. A demanding career along with family responsibilities isn't something many women are willing to sign up for. Anamika Ghosh, a student of one-year MBA programme at SPJIMR, cannot agree more. She says, "A lot of my friends find me doing an MBA after marriage surprising. I get asked so often, how can I do an MBA after marriage, don't my in-laws have a problem?"

Once these questions stop and there is acceptance that women need to chart their own life journeys, whichever way they want, gender diversity at B-schools will automatically improve.