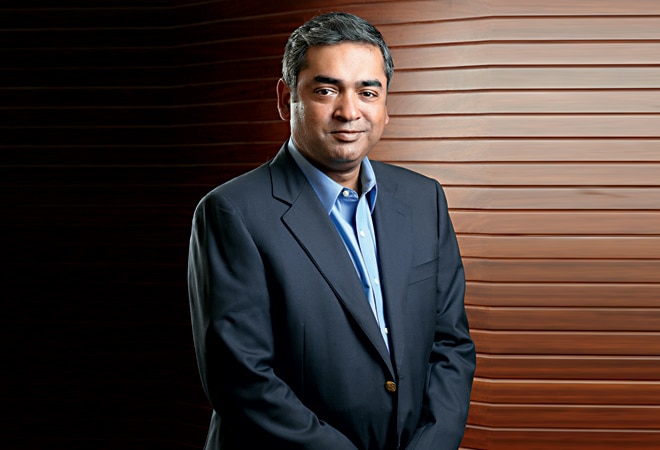 Despite running a company that has been increasing revenues at a compounded annual growth rate (CAGR) of over 12 per cent over the past four years, Ashish Bharat Ram thinks growth is not his biggest concern. He says while he does talk about growth and aspirations, he wants to ensure that when he goes to sleep at night, he doesn't have to worry about something that went wrong.

This doesn't mean taking off the thinking cap. "Business strategy is something where the mind works 24x7. I might wake up at five in the morning with some crazy idea. I would send an email to one of my CEOs [he has four]. We chat about it and build upon the idea. Sometimes, it can be a stupid idea and we throw it out. If it has merit, we figure out how we are going to take the discussion forward," he says.

Over the past few years, Ashish, son of SRF Chairman Arun Bharat Ram, has been steering the company towards a new direction by building upon its strengths and putting it on a high growth trajectory. For instance, 10 years ago, technical textiles were more than 50 per cent of revenue. It is relatively small now as SRF has pivoted towards chemicals and packaging. Why?

The technical textiles business depends on two industries, primarily auto, and construction. On top of that, the company is heavily reliant for this segment on the domestic market where growth rates have slowed considerably. Its key product in technical textiles, nylon tyre cord fabrics (NTCF), used as a reinforcement material in old-world bias tyres, has seen a fall in demand in recent years because the now-popular radial tyres use a different raw material. This shift, followed by slowdown in the auto segment over the past two-odd years, has affected SRF's technical textiles segment. "It might be a $130 billion space globally but is fragmented. The largest manufacturer of airbags in Europe, for example, may have revenues of ?70-75 million, which is not big... as massive truck tyres keep getting radialised, the demand for bias tyres [which use NTCF] will come down," says Bharat Ram.

Bharat Ram believes SRF is just scratching the surface in the chemicals space. Why? Firstly, at the macro level, India has started catching up with China, which used to be a hub for global supply chains. While India may still not be in a position to compete with China head-on, it's expected to pick up a fair amount of market share from its neighbour over the next 5-10 years. That is why SRF has been investing heavily in chemicals. For instance, the company has over 400 people in R&D and engineering division who develop processes for molecules required by customers. They also develop processes for new generation refrigerant gases.

"It's becoming a self-sufficient company which doesnt have to buy technology from outside. We have just seen the tip of the iceberg. I think over the next few years, there is a great opportunity for high-quality companies in India to keep moving up the value chain in chemicals. Whether it is Europe or America or any other part of the world, they will start looking at offshoring in a bigger way," says Bharat Ram.

A November report by brokerage Sharekhan said that given the massive revenue opportunity due to import substitution (India's specialty chemical imports are $56 billion), potential increase in exports given the 'China Plus One' strategy being adopted by global customers and favourable government policies (such as tax incentive and production-linked incentive scheme similar to the pharma sector), it remains bullish on medium- and long-term growth prospects of the specialty chemicals sector. "Conducive government policies, product innovation, massive export opportunity and low input prices will help the sector witness high double-digit earnings growth on a sustained basis over the next two-three years...," it said.

The other promising segment, packaging films, got a fillip after the pandemic as demand for hygienic products shot up. SRF is doing product development work such as developing mono-layer and biodegradable substrates even in the packaging space. It has also started working on biodegradable products despite low demand because it believes that, at some point, customers will be willing to pay (these products are priced high as they need a lot of additives to become biodegradable). "We're going to be sort of product-ready in advance," he says.

Nirmal Bang Institutional Equities Research estimates capital expenditure of Rs 5,600 crore between FY20 and FY25 with a bulk of it going into chemicals and packaging films. The company has been generating operating cash flow and largely relies on internal accruals to fund capital expenditure, which has strengthened its balance sheet.

"Over the next three-four years, the company will deploy 50-60 per cent of its capex toward the high-growth business of speciality chemicals to tap opportunities emerging from the agrochemical and pharma industry. We expect that, over the next decade, the speciality business will drive growth for SRF. Besides, it will spend 20-30 per cent of capex on packaging films business," HDFC Securities said in a November report.

Bharat Ram says the 'China Plus One' game started three years ago when China started cracking down on bad environmental practices. This hit global supply chains. That's when companies in the US and Europe began looking at India as an alternative to China. "In that sense, the movement had already started. I think with outbreak of Covid, when supply chains got impacted a bit more in the beginning of this year, that momentum picked up a little bit," he says.

Changes in the global supply chain will benefit SRF. That's because 60 per cent of its business comes from exports. In speciality chemicals, it is over 90 per cent. Bharat Ram says export opportunities are huge compared to the potential of the domestic market. His mathematics is simple: India's economy is worth $2.8-3 trillion and global economy is worth $85-90 trillion. "The overseas market is so huge that if I can pick up even a little [share], [I will still be a] minuscule player in that. We are developing high-end molecules that customers in Europe are willing to pay a higher price for. The share of revenue we generate from outside India will keep increasing," he says.

Established in 1970, SRF operates 11 plants in India, and one each in Thailand, South Africa and Hungary. The company exports to more than 75 countries. The idea is to get closer to customers, especially in packaging films. In chemicals, however, the strategy is to build big. Economies of scale make a big difference in chemicals as by-products of one plant become raw materials for other plants. "Integration opportunities in the chemicals space are large if it builds large sites in India," says an analyst.

Even as the pandemic has had limited or no impact on SRF's businesses, Bharat Ram says the culture of the company, which is built on interactions among employees, has suffered. "One aspect I don't want to give up is visiting plants. The physical contact with the team and the interactions build bonds. While Zoom and Microsoft Teams, etc, have allowed us to do our day-to-day work, not meeting physically takes away from culture creation. That's something I feel, once we get to some sort of normal after Covid, is an area where I will have to focus a lot," he says.

Being involved in chemicals and packaging, SRF is also focusing on implementing sustainable practices which can also generate ROI (return on investments) sometimes. The biggest challenge in the chemicals business, for instance, is to treat byproducts, which is why having integrated plants is necessary. Another goal is to keep reducing water consumption.

Bharat Ram's approach towards nurturing both people and business simultaneously would help him build a holistic growth story at SRF.