These companies cut across sectors and include Vakrangee, PC Jeweller, Arvind, Rain Industries and Indiabulls Real Estate, among others. Most may never go back to their past highs

The year 2019 saw the fall of some mighty companies. While some were buried under debt, some faced governance issues, and others became victims of the liquidity crisis. But the net result was the same - deep erosion in market capitalisation.

According to BT research covering the top 500 listed companies, 22 saw a fall of more than 45 per cent in average market cap (October 2018-September 2019 period) over the previous year.

These companies cut across sectors and include Vakrangee, PC Jeweller, Arvind, Rain Industries and Indiabulls Real Estate, among others.

"It is a very wide set of industries and companies. The stress has aggravated, especially for entities whose balance sheets have been leveraged a lot and where operating metrics had deteriorated. In terms of stock price behaviour, mid- and small-caps have been battered. As a result, there has been a significant decline in investor interest," says Dhananjay Sinha, Head of Strategy and Chief Economist, IDFC Securities.

Some companies have also seen issues around reporting of numbers, whose credibility has been questioned, adds Sinha.

The biggest decline in average market cap was witnessed by technology firm Vakrangee, which runs one of India's largest networks of last-mile retail outlets. The scrip first came under pressure in early 2018 after Price Waterhouse quit its audit mandate and raised concerns about the company's books of accounts. The company also came under the scanner of the Securities Exchange Board of India (Sebi) for alleged stock manipulation issues but was given a clean chit in November 2018 by Sebi as well as the Economic Offences Wing. In the meanwhile, its stock took a beating. From Rs 420 on January 1, 2018, it continued to fall and closed at Rs 36.55 on November 1, 2019. 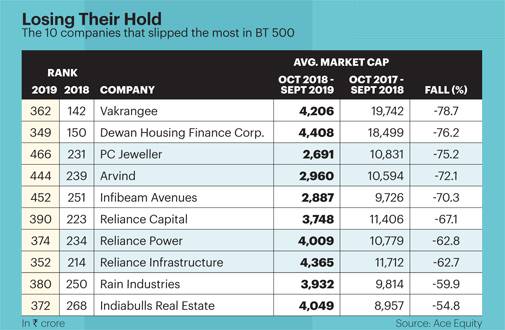 Alongside, Vakrangee impacted the scrip price of PC Jeweller, whose average market cap nosedived 75.2 per cent to Rs 2,691 crore during the October 2018-September 2019 period. On January 25, Vakrangee had purchased two million shares of PC Jeweller for a little over Rs 112 crore through an open market transaction. The slide in PC Jeweller began on February 2, 2018, after reports that Vakrangee was being probed by Sebi for possible stock manipulation. Heavy selling put pressure on the PC Jeweller stock.

Yes Bank, too, has seen its average market cap become nearly half from Rs 76,575 crore to Rs 38,505 crore amid news of high non-performing assets (NPAs), the bank's inability to raise adequate capital and excessive exposure to the real estate sector. In August this year, Moody's Investors Service downgraded Yes Bank's long-term foreign-currency issuer rating to Ba3 from Ba1, with negative outlook. It took into account "the lower-than-expected amount of capital raised by the bank and the risk that the substantial decline in the bank's share price will challenge its ability to raise sufficient capital to maintain the rating at its previous level."

A Yes Bank spokesperson said: "While the bank cannot comment on the share price movement, we must understand that any movement in share prices may not be a reflection of the robustness of an institution's business, profitability, liquidity or stability. Yes Bank remains firmly on track to raise transformational capital and is in talks with quality investors to not only bring in financial capital but a lot of strategic input as well."

The bank has recently received the RBI's go-ahead for increase in authorised share capital, the spokesperson said.

DHFL, once among India's top home loan providers, saw a 76 per cent decline in average market cap to Rs 4,408 crore as liquidity crisis after payment default by IL&FS severely impacted the company's ability to roll over debt and raise fresh funds for loans. Many others in the sector, including Indiabulls Housing Finance, also had to suffer in the wake of the liquidity crisis.

"The IL&FS saga turned the tide for the sector. Finance is all about trust and the moment trust vanishes, lending as a business becomes very tough. Many companies may get caught in this hurricane and those who cannot move ahead will sink," says Umesh Mehta, Head of Research at Samco Securities.

In the case of Indiabulls Housing Finance, which slipped 31 places to rank 92 this year, apart from the NBFC crisis, two other factors impacted the company's market cap. One, its proposed merger with Lakshmi Vilas Bank (LVB), which required multiple clearances, did not get all the approvals. The scrip continued to take a beating till RBI declined its final go-ahead in October. Second, three public interest litigations have been filed over the last one year, alleging financial irregularities in the company.

"Multiple attacks have come our way over the last six months due to the merger, resulting in perception disturbance. So we have to work with lenders and stakeholders to make sure that the perception goes back to appreciating that between 2008 and 2018, we created from scratch the second-largest housing finance company in India. It will take four-five months to get back the perception," says Gagan Banga, Vice Chairman and MD of Indiabulls Housing Finance.

In contrast, Ahmedabad-based Arvind has seen a steep fall in average market cap due to the demerger of two of its subsidiary companies, Arvind Fashions and Anup Engineering, between October 2018 and November 2019, says a company spokesperson. As a result of this, Arvind's shareholders received shares of Arvind Fashions and Anup Engineering without any payment. The price of Arvind was, thus, readjusted after removing the value of the two demerged companies and the stock started trading at Rs 109.45 per share from November 28, 2018, resulting in a market cap of Rs 2,831 crore. The demerger had an impact on Arvind since valuations of the two subsidiary companies were not a part of its market cap from this day onwards.

The downfall of some other companies has been due to lack of earnings growth. "Decline in earnings hampers cash flow and adversely affects debt servicing capabilities. This also hurts the companies' ability to hire resources, besides challenging the expansion of operations. So a lot of companies had to downscale," says Sinha of IDFC Securities.

Tata Motors, Sun Pharma, Jain Irrigation Systems and NBCC are among companies whose earnings have taken a hit in the last two years due to a slowdown in domestic and global economies. In NBCC, the real estate slowdown led to a fall in revenues and zero EBITDA margins following execution woes in redevelopment projects. Shashank Kanodia, analyst at ICICI Securities, says protracted weakness in the domestic commercial vehicles space has adversely affected Tata Motors. "The industry continues to reel under overcapacity, lower economic growth and inherent cyclicality, with recovery seen only after FY21," he says, giving a forecast of negative volume growth for the company's India business.

"A plethora of negative factors coincided with intensification of global trade conflict, especially after October 2018. This led to a significant correction in stock prices, tanking market cap and making some stocks very illiquid," Sinha adds.

Till there is a change in the overall economic conditions and sector specific factors, a significant improvement in market caps seems unlikely.