News
Magazine
India's Most Valuable Companies 2020
Back With a Bang

Back With a Bang

Bharti Airtel is in a sweet spot again, thanks to tariff hikes last year, digital gameplan and relentless focus on winning quality customers

It's not hard to figure out where a company is headed. Among other things, it requires paying attention to words of its leadership team. In Airtel's case, there are compelling reasons to believe that the company wants to shed the tag of a telecom firm and be known as a digital services company. CEO and MD (South Asia and India) Gopal Vittal emphasised on this at the latest conference call with investors, there was ample prior evidence of the company's ambitions. For instance, the number of times Vittal mentioned 'digital' during earnings call jumped from zero in June 2018 quarter to four in December 2019 quarter to 28 in March 2020 quarter.

"We are maniacal about morphing ourselves into a digital services provider by riding on our core strengths and building this virtual flywheel... I see all this coming together to make Airtel more meaningful for customers than ever before," Vittal told investors during the earnings call. 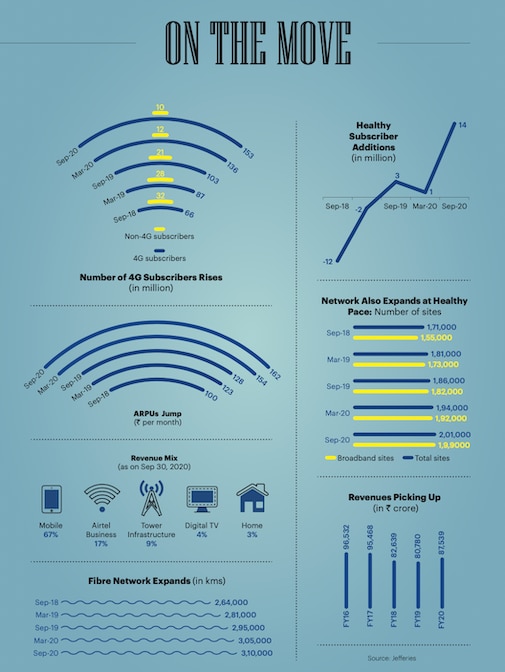 It is clear that Airtel is building a new narrative around itself. There are largely three levers for this transformation: pandemic-led change in the telecom ecosystem, a similar shift at arch-rival Reliance Jio and search for new revenue sources. For instance, Airtel's digital platform is a bouquet of services and products either developed in-house or through partnerships. The telco has been silently building digital assets over the past three years, a domain where it employs over 1,200 people.

And markets are happy with the makeover. Airtel has made a comeback into the top 10 of BT500 companies after staying out for seven years. If analysts are to be believed, it is a lasting comeback.

"Airtel seems to be in a sweet spot. The consolidation in the telecom sector followed by last year's increase in tariffs, improvement in internal metrics such as ARPU [average revenue per user], solid 4G customer additions and lower churn indicate that Airtel is back in the game. The company's three-year growth trajectory looks strong," says Bhupendra Tiwary, telecom analyst at ICICI Securities. The turnaround has been a result of careful planning and execution.

Soon after the Jio juggernaut hit the sector, Airtel went back to the drawing board and decided to revisit its wireless strategy. The first step was to accelerate 4G investments and minimise subscriber churn. Historically, Airtel has been strong in the postpaid segment, and so it decided to load its postpaid subscribers with data and content choices. The aim was to retain this high-value customer base. Though there was major churn initially, especially in the prepaid segment, the value proposition that Airtel offered, including quality of service and network availability backed by a strong spectrum bank, arrested the fall in the wireless subscriber base. The trend continues today. The telco also moved out of 3G completely and re-farmed the 900 MHz spectrum, used to deliver 2G, for 4G, where all the action has been happening.

Then, it acquired smaller players like Telenor India, Videocon Telecom and Tata Teleservices' mobile business. These didn't give it a stable customer base but brought valuable spectrum. "It was a buyers' market when Airtel acquired these companies in 2016-2018. The fringe players could not withstand Jio's onslaught. That gave Airtel a chance to bolster its spectrum holding and prevent acquisition of these entities by Jio," says a telecom consultant.

Since Jio had 4G-only network, Airtel saw this both as an opportunity and a threat. Initially, it was a threat because a number of Airtel's prepaid customers switched to Jio due to its brand-new network and dirt-cheap tariffs. Airtel, on the other hand, maintained a premium over Jio in tariffs. After the market stabilised a bit, Airtel sensed a big opportunity to gradually upgrade its 2G subscribers to 4G. This resulted in Rs 60-70 rise in Airtel's ARPU. Lastly, the telco booted out low-paying and inconsistent users by launching minimum recharge plans in late 2018. This caused a sharp drop in subscribers but streamlined subscriber base and improved profitability.

The results are evident. ARPU rose from Rs 100 in September 2018 to Rs 162 in September 2020. "Bharti Airtel's [second quarter FY21] result shows its superior execution in mobile and other segments. Bharti's India mobile print shows marked improvement in many areas such as growth in subscribers without ARPU dilution, lower churn increasing lifetime value of customers and continued 4G net additions, which have likely matched the market leader. Our estimates for FY21 had downside risk due to delay in tariff hike. However, robust performance has offset much of it. We believe higher 4G base will enable Bharti to better transfer tariff hike into ARPU whenever it happens (and believe it is matter on 'when' and not 'if')," says a recent ICICI Securities report.

Despite improvement, ARPUs are still below the desired levels. Airtel's Chairman Sunil Bharti Mittal had said last year that the ARPU per month needed to go up to Rs 300 to become healthy and sustainable. But this requires multiple rounds of tariff hikes and Airtel has expressed its reluctance to lead the pack. Vodafone Idea, though, has indicated that it might go for a tariff increase without which its survival will be in jeopardy. "We are at a premium. We don't want to risk any slowdown in momentum by moving pricing at a time when it's uncompetitive. We will welcome change in tariffs and follow immediately," Vittal said recently. Nevertheless, in the middle of the AGR (adjusted gross revenue) imbroglio, it managed to raise over Rs 46,000 crore between May 2019 and January 2020 through a combination of rights issue, foreign currency convertible bonds and qualified institutional placement.

Cut to 2020. Airtel is speaking a different language, some influenced by Jio, which is repositioning itself as tech+consumer company. In part, Airtel's digital ambitions are driven by recent changes in the business environment. Even as Airtel was putting its house in order, Covid changed the telecom landscape and the way people and companies consume telecom services.

Brokerage JM Financial says fixed broadband and enterprise segments are new growth areas for telcos such as Airtel. In broadband, for instance, the market penetration is low at 6-7 per cent as compared to 55 per cent in China and 70-80 per cent in developed markets. "This could rise significantly driven by remote working and development of a dispersed workforce strategy, reduction in prices of smart TVs, which require fixed broadband connectivity for seamless streaming, bundling of live TV and OTT [over-the-top] by DTH [direct-to-home] and cable TV providers to offset the 'cord-cutting' phenomenon and possible reduction in differential with wireless given the impending wireless tariff hikes," says a recent JM Financial report.

Airtel added 1,30,000 home broadband subscribers in the last quarter. "Broadband is at the cusp of growth. With Covid a trigger point, we are seeing a rise in work from home, online education and streaming services. We are doubling down on broadband through four approaches. First is rapid expansion of coverage. Second is acceleration of LCO [local cable operator] partnership model. Third is bringing the full power of Airtel services and partner services to deliver converged offer encompassing connectivity, entertainment and more. Finally, an adjustment in entry prices due to competitive reasons," says Vittal.

The other big opportunity for Airtel is in the enterprise market where again there is huge scope to grow given that it accounts for over 28 per cent of the global telecom market as against just 9 per cent in India. What's more, Covid has forced businesses of all sizes to have a digital presence, which has opened new growth avenues.

"After Covid-19, not only larger enterprises, MSMEs are also focussing on digitising business operations, having omni-channel presence and business continuity plans. India's enterprise telecom segment is significantly under-penetrated with market leader Bharti having only about 2,500 large clients and one million SME clients, when India has around 63 million MSMEs," says the JM Financial report.

To handle the demand from enterprise customers, Airtel Business recently added almost 7.6 terabits of capacity to its transport network. The launch of Airtel IQ in the $1-billion cloud communications market in October will also help Airtel customers engage with their users in a safe and secure manner across multiple channels - voice, SMS and video.

With key concerns like AGR and heightened competition under control, Airtel is in a position to acquire more quality customers, drive greater share of customer wallet and develop new revenue streams in times to come.