India's scrappage policy for automobiles has the potential to reduce pollution and the industry's carbon footprint while creating employment and demand. It's a $6-billion opportunity 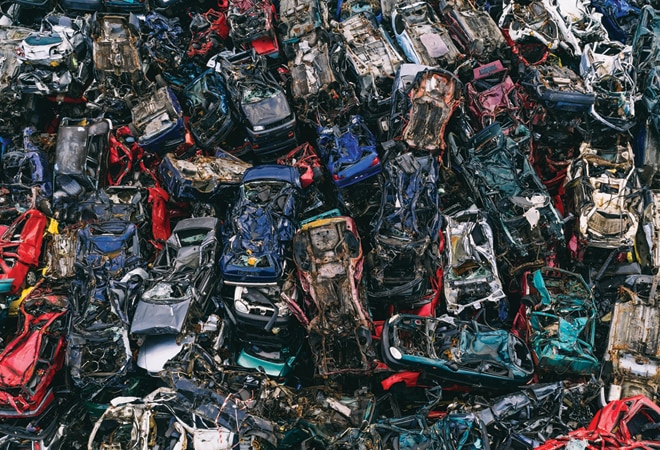 When Nitin Gadkari, Minister for Road Transport and Highways and MSME, spelt out the contours of India's first vehicle scrappage policy in mid-March, it was the culmination of a process that started more than a decade ago. The multipronged policy, which seeks to replace ageing and outdated vehicles in favour of modern and more technologically advanced versions on the road, would effectively come into force only from June 1, 2024 when fitness tests become mandatory for most cars and SUVs. Under the new policy, the Ministry of Road Transport and Highways has advised automobile manufacturers to provide a 5 per cent discount on the purchase price of a new car for anybody who buys them after scrapping the old vehicle. It has also asked state governments to waive off registration fees on the new vehicle. This will be on top of the scrap value of the old vehicle, which could be anywhere around 4-6 per cent of the ex-showroom price of a new car. For heavy commercial vehicles, fitness tests will become mandatory from April 1, 2023.

It could still be anti-climatic, though. Voluntary in nature, the policy announced so far feels more like a work in progress than a finished product. None of it is binding as of now. In automotive parlance, it is akin to a clay model and not a metal body. From his own end, Gadkari has requested the finance ministry to offer some rebate in Goods and Services Tax (GST), but a response is awaited.

It does not, however, undermine the importance of the policy itself, or its potential to solve multiple problems at the same time. The biggest of them is reducing carbon footprint and cleaning up the environment. There are an estimated 68 lakh vehicles currently plying on roads that are older than 15 years and can potentially be scrapped. A significant number of them do not conform to any significant emissions regulations - India embarked on a formal emissions road map only in 2000. These numbers would rise exponentially when a similar policy for two-wheelers, which is also in the works, is ready.

Scrapping these highly polluting vehicles with newer ones that comply with BS-VI regulations, one of the most stringent emission norms around the world, would reduce vehicular pollution in the country significantly. Vehicles contribute anywhere between 15 and 30 per cent of particulate matter emissions in some of the most polluted cities in India, including its national capital.

"The policy is aimed at reducing the population of old and defective vehicles, bringing down vehicular air pollution and improving road and vehicular safety," Gadkari had said. "It will also help in achieving better fuel efficiency, formalising the unorganised vehicle scrappage industry and boost availability of low-cost raw materials for automotive steel and electronics industry," he added.

Replacing a 10-year-old truck or bus with a new vehicle would result in an estimated 28 per cent reduction in particulate emissions, 18 per cent drop in hydrocarbons and nitrogen oxide emissions and 17 per cent fall in carbon dioxide emissions.

"The scrappage policy is a very important step in the right direction towards making India a manufacturing hub and elevating the Indian auto industry a notch up in terms of better technology adoption, safer and cleaner vehicles," says Venkatram Mamillapalle, Country CEO and Managing Director, Renault India Operations. "The scrappage policy will help reduce pollution levels significantly and streamline the unorganised and fragmented recycle market in the country."

Further, an entire ecosystem of efficient recycling will provide a steady stream of raw material that can be used to manufacture new products, according to Gadkari. The most obvious is steel scrap, aluminium and copper, but it will not be restricted to just that. As seen globally, other materials coming out of the shredders that are currently discarded as waste and become a source of pollution, can be put to use as well. Recycled polyurethane foam plastic can be used in seat cushions, scrap bumpers can be reformulated to make mud and splash guards and recycled plastic can be used to create upholstery for passenger seat cushions.

"The new policy can help in three ways: one, lower the cost of passenger vehicles by 8-10 per cent for most segments; two, afford replacement of older, more-polluting passenger vehicles; and three, increase the availability of key raw materials such as steel, copper and aluminium, which can be recycled to lower the production cost of new vehicles," says Anuj Sethi, Senior Director, CRISIL Ratings.

"It will have an impact on reducing pollution and carbon footprint in other industries as well," adds Ashim Sharma, Partner and Group Head, Nomura Research Institute Consulting and Solutions India. "Mining for raw materials used for production of steel causes significant greenhouse emission. That can be nearly halved if steel is produced from 97 per cent recycled steel."

It does not end here. Defunct automobiles are a major source of industrial waste in the country, occupying acres of space in landfills. Efficient recycling will also free up space. India currently produces 62 million tonnes of waste every year, which is projected to more than double to 165 million tonnes by 2030.

"That will ideally require a landfill area of 160,000 acres (assuming a landfill site that is 10 metres high and can hold 20 years of waste)," says Nomura's Sharma. "If we can recycle our vehicles up to 90 per cent, it can reduce the landfill requirement for scrap vehicles by 46 acres in the next five years."

The opportunity is big. According to a HDFC Bank study, the market for vehicle scrappage and recycling is estimated at $6 billion per annum. If allowed to thrive, a parallel system of fitness centres will also come up. In January, the government approved a proposal to levy a green tax on old vehicles said to be polluting the environment. As part of the proposal, transport vehicles older than eight years may be taxed at 10-25 per cent of road tax at the time of renewal of fitness certificate. For personal vehicles, the tax would have to be paid at the time of mandatory renewal of registration certificate after 15 years. All commercial vehicles need to get fitness certificates renewed every year after the first two years.

This tax will vary from region to region depending on how polluted the climate is. For places such as Delhi-NCR, it could be as high as 50 per cent of road tax. There may be a differential rate for petrol and diesel vehicles as well, since diesel vehicles are considered to be more polluting than petrol. It's a classic carrot-and-stick strategy where the scrappage policy incentivises consumers to trade their old vehicles for new ones, and green tax makes it more expensive to retain reasonably fit but old vehicles.

To make this work, however, the country needs more scrapping yards and a whole network of fitness centres at road transport authorities. According to the Central government, there are currently only 26 model smart fitness centres in the country and there is a need of at least 49 more. The ecosystem around scrapping and issuance of fitness certificates is expected to attract investments of Rs 10,000 crore and create 35,000 job opportunities.

"The key lies in framing the right rules and putting standard operating procedures for testing, payments and grievance redressal," says Preetam Mohan Singh, Senior Vice president, Automotive, Praxis Global Alliance. "How will the provisions of green tax be implemented and monitored? How will new testing centres be set up under PPP mode? These are important issues as the success of the programme is directly linked to the execution of the policy."

Scrapping is a common practice globally and such schemes have been in place in most developed economies. After the global financial crisis in 2008, the US government's scrappage initiative - the $3-billion "Cash for Clunkers" programme pulled GM and Ford back from crisis, with sales spiking 30-40 per cent in the quarter following the implementation. In Germany, such an initiative boosted automobile sales by 40 per cent.

The success of the scheme depends on the incentives being offered to consumers. This is even more critical in a cost-conscious market like India. The sweeteners could be in the form of a direct cash subsidy, interest subvention, tax cut or a mix of all these. The current policy is vague in this aspect, which can make it ineffective.

"From our end, giving a discount of 5 per cent is too much, but we will look into it," says S.S. Kim, MD and CEO, Hyundai Motor India. "The government should also give something from their end - may be a tax rebate. That will make it more attractive for the consumer. The industry will also definitely give what it can. This is a very important and much-needed policy."

Besides the discount from companies, the policy banks upon a 25 per cent rebate on road tax for passenger vehicles and 15 per cent for commercial vehicles, a waiver on road tax for a new vehicle that the consumer will buy in exchange for his/her older vehicle. These along with the price he would get for the scrapped vehicle - estimated to be 4-6 per cent of the cost for the new vehicle - may not be enough for him to consider scrapping on his own.

According to an analysis by CRISIL, only around 45,000 buses and 40-60,000 passenger vehicles may get scrapped under the policy. Even in the case of heavy trucks and trailers, classified as medium and heavy commercial vehicles where the potential for scrapping is higher at around 5.1-lakh vehicles, it may not gain much traction since it does not make much economic sense for small transporters under the current incentive.

"The policy is unlikely to have freight transporters queuing up to replace old vehicles with new ones. The scrappage volume of buses, passenger vehicles and two-wheelers will be limited as well," the research firm said. "Because of the slim potential, overall volume of vehicles that would require to be scrapped and the unviable economics, the scrappage policy may not lead to substantial uptick in the business of scrappage centres."

It has taken its own time and even now needs a bit of tweaking, but through its scrapping policy, India has a glorious opportunity to clean its air, reduce carbon footprint and contribute in the fight towards a zero-carbon world.

Blend It to Fix It