Out of the Box

A clutch of start-ups is making inroads into the niche market for learning-based activity boxes. The response is strong but as of now limited to urban areas
Radhika K.T.P. | Print Edition: February 23, 2020 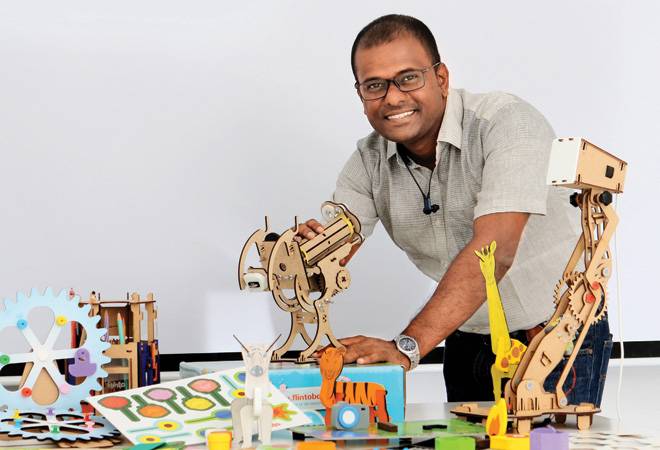 Until two years ago, Prabha Natesan's five-year-old daughter Srishti would spend most of her time watching TV or with other gadgets. "This was also when I had my second child and I didn't have enough time to take Srishti out to play. So, she was hooked to screens. Her learning activities, creativity, etc., were getting affected," recalls Bengaluru-based Natesan. A friend suggested Magic Crate, a subscription-based 'activity box'. "My daughter enjoyed them. The activities not only kept her engaged but also sharpened her skill sets," says Natesan, echoing what many parents say about such activity boxes, which are usually theme-based and contain projects, games and DIY activities that help children develop motor, cognitive and social skills.

The strong demand from new-age parents is reason enough for makers of such boxes as well as their investors to place big bets in the segment. India's 'children and parenting' sector, and its educational-based entertainment segment in particular, has grown manifold in the past five years. Several start-ups have entered the space and caught the eye of the investor community. The reason is that not only does India have the world's largest child population - children (0-14 years) account for a little less than a third of the country's 1.3 billion-plus population (Ministry of Statistics and Programme Implementation) - among the urban population, 26 per cent or about 99 million people are in the 0-14 years age group. The market is vast.

While the larger edu-tech sector is witnessing a boom thanks to companies such as Byjus, the biggest unicorn in the sector, early-development and educational-products companies are getting more attention too. "Over 80 per cent of critical brain development happens before a child turns eight. So, many new parents are willing to spend more on their children at this stage and want them to acquire skills such as analytical reasoning and complex problem solving," says R. Viswanathan, Co-founder of Bengaluru-based Magic Crate. "Spending starts as soon as a child is born and there is no end to it. So, they (parents) are high lifetime-value consumers," he adds.

The segment of learning activity boxes is niche and shares the market with educational toys as well as early childhood education. Globally, the early childhood learning and education market was pegged around $2.2 billion in 2017, according to Marketwatch, and is expected to reach $2.9 billion by 2022. The educational toy market stands at $25 billion (in 2019) and is set to reach $34 billion over the next five years, says research agency Orbis Research. In India, however, the segment is highly fragmented and has started growing in earnest only recently.

"In 2013, when we started Flintobox, there were barely any activity-based learning solutions that operated on the subscription model in India. It was very difficult to go to the market as parents were not aware then," says Arunprasad Durairaj, Co-founder, Flinto Learning Solutions.

However, with the expansion of e-commerce, mobile penetration and advancements in payment gateways, the market has become more developed now. Starting with 500 customers in its first year of operations in 2013, Flinto has so far served around 6,00,000 customers. "In the last financial year (2018/19), we shipped 7,50,000 boxes," says Durairaj.

The market for offline educational games-based products is growing at 20 per cent CAGR, according to industry players.

Among the companies that operate in the activity-boxes space is Delhi-based Xplorabox. "Children under 10 years do not have much academic pressure but possess a lot of energy. In urban centres, playing outside is not easy for most kids," observes Rishi Das Agarwal, Co-founder of Xplorabox. Founded in 2015, Xplorabox, like many of its competitors, has designers as well as teachers who come up with concepts and activities suitable for various age groups.

"With more than 30 million children in the 2-12 years age group in Tier-1 cities alone, the market is ready for big expansion," says Das. The company has about 1,00,000 customers and ships to about 900 locations in India, he adds. Das says the company's revenue is growing at 150 per cent year-on-year.

Xplorabox's competitor Magic Crate, which was founded in 2014, has dispatched over a million boxes till now and is reporting 10 per cent growth in revenues every month, according to its co-founder Viswanathan. "At present, we are sending more than 50,000 boxes every month and have raised Rs 25 crore investment in total," he adds.

With learning-based activity boxes slowly gaining acceptance, investors are biting the bait. While Magic Crate is backed by investors such as Fireside Ventures and 3One4 Capital, Flinto Learning Solutions, the pioneer in the field, has till now received about $9.5 million in five rounds from InnoVen Capital, Lightbox, Globevestor, and others. Xplorabox has also received two rounds of funding (undisclosed sum) from investors Green Shoots Capital, SucSEED Venture Partners and Z Nation Lab.

"It is a massively scalable business, growing at over 100 per cent," says Prashant Mehta, Partner, Lightbox Ventures, which has invested in FlintoBox. "It has significantly higher retention rates because of the subscription-based model," he adds.

Another attraction is the segment's high EBITDA margin. "The EBITDA margin is more than 50 per cent. So, even if you become lenient with expenses, you still end up with 15-20 per cent margins as the cost of production is not huge and will come down with time," says Laxman Kumar Nasarpuri, Partner at Greenshoot Capital, which has invested in Xplorabox. "It is easier to reach out to the market as you have a focused set of customers in preschools and schools," he says.

Agrees Kannan Sitaram, Venture Partner at FiresideVentures: "Most of the subscription-based platforms have 60-70 per cent repeat customers and will have superior returns compared to other sectors." Fireside has invested in two other companies that cater to children, and the three investments together account for about 25 per cent of its exposure

While the main focus for activity box makers remains subscriptions (mostly taken by parents), they are venturing into other markets as well. Flinto Learning Solutions is targeting pre-schools with a product-as-a-service model. They have pre-packaged material for children, online teacher training and assessment of teachers and children. "We are aggressively partnering with schools and innovating our product portfolio," says Durairaj.

"We are also going to be available in physical stores and are trying for the next round of fundraising," says Viswanathan of Magic Crate.

The gaining popularity of the segment has attracted others too. In 2018, publishing house S Chand and Company entered into a partnership with South Korea-based Sigong Media, which makes NuriNori activity boxes for preschool children. It has also invested in New-Delhi based Smartivity Labs, a STEM (Science, Technology, Engineering, Mathematics) toys design start-up. Lucknow-based Rs 250-crore publisher Kriti Prakashan, which publishes schools textbooks, companion books and story books, also plans to join the fray. Along with books, it is distributing activity boxes free of cost to schools. It is in preliminary talks with an activity box start-up for a tie-up

Not to be left behind, toy manufacturer Funskool has increased its portfolio of puzzles, DIY activity kits and art and craft offerings. At present, these products account for more than 20 per cent of Funskool's overall revenues. "In the next few months, we are going to launch STEM toys, as there is a growing market in that space," says R. Jeswant, Senior Vice-President, Sales and Marketing, Funskool India.

With funds on track, market players are bullish. Many say that children's products and services are generally immune to market fluctuations as parents cut expenses elsewhere rather than here. Most activity box companies expect to break even and become profitable in another two to three years. Viswanathan of Magic Crate says the company is aiming to become profitable in the next 18 months. Flinto's target is to clock a revenue of Rs 70-80 crore in 2019/20 and cater to 5,00,000 customers a year by 2022.

The hurdle in faster growth of activity-based boxes is low awareness in smaller towns. "We have made inroads in Tier-I cities but exposure to child development needs is limited in Tier-II and III markets. We are not growing aggressively in that market," says Durairaj of Flinto.

On the supply side, the makers are not able to find good talent, especially designers. "This is because the industry is nascent. So far, there were limited opportunities in child psychology, children centric design, etc. So, people were not really equipping themselves to serve this market unlike, say, the technology industry where there are many opportunities," says Durairaj.

Cost is also a deterrent for buyers. While the companies are working on increasing their reach and products, many parents find the cost high. "Projects and activities cannot be revisited the way puzzles can be. Of course, the activities are very informative, sharpen focus, improve hand-eye coordination while keeping the child engaged, but once you are done with a project, you are done," says Chennai-based K.K. Yamini, who has subscribed to multiple boxes in the past two years for her five-year-old daughter.

Increased scale could make the products more profitable, but innovation and variety along with more parents feeling the need to keep children away from screens is what the segment needs if it is to get to the next level.