You don't always gain from a bonus issue

The announcement of bonus shares shows that a company is confident of the future and, therefore, the stock price moves up.

Rule: The announcement of bonus shares shows that a company is confident of the future and, therefore, the stock price moves up.

Exception: If the bonus announcement is merely a strategic ploy to boost market sentiment and investor confidence in the company, it may not have the desired effect on the stock price.

28 companies have issued bonus shares so far this year. The latest is IOC, which issued a 1:1 bonus in October. Thirteen other companies announced bonuses in 2009.

Rs 0 is the purchase value of a bonus share for tax purposes. If sold within a year, the shareholder will have to pay 15% of the proceeds as tax on short-term capital gains. 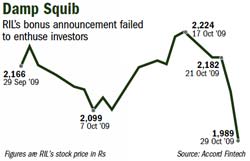 When Reliance Industries announced a 1:1 bonus issue on October 7 this year, it was touted as a Diwali gift for shareholders. But the stock market was not impressed, and after an initial spurt, the Reliance Industries scrip slipped below the pre-announcement level.

The issuance of bonus shares is merely an accounting exercise that shifts money from one head to another. The company uses its accumulated reserves to issue new shares to existing shareholders and expand its equity capital. This transfer does not create any value for the shareholders because they get something that was already theirs.

Reliance Power used the bonus tactic to arrest the slide in its share price after its IPO in February 2008. The company announced that it would give three shares for every five held by non-promoter shareholders to bring down the cost from Rs 430 to Rs 269. Reliance Power shares had dropped 15% to Rs 372 on the day of listing.