Focus on your health requirements to navigate through the flood of insurance policies in the market.

Choosing the right health insurance can be tough. Ask Shagun Mehrotra, 38, a Delhibased single woman, who was bombarded with several policies, ranging from a basic cover and a complex surgical procedures and critical illnesses cover to hospital cash reimbursement, when she explored the market. “I was more confused than ever. It was a problem of plenty and anyone in my position would have found it difficult to decide which policy to choose and which one to drop,” she says. Finally, she settled for a basic health plan that provides cover for specific illnesses.

Mehrotra is not alone. Many people face a similar dilemma. There are several reasons for this. First, there is no perfect health insurance policy. Each individual has to decide what he needs based on his lifestyle and family requirements. Secondly, intense competition among insurers and the various intermediaries results in so much information (and misinformation) that it is almost impossible to choose from the various plans that are available. Finally, there’s the fine print to contend with. The trick in deciding on a policy is to look at the exclusions, not inclusions.

So are you destined to flounder while choosing your health insurance? No, help is at hand. We give you tips on which policy to buy and how to do it, as well as the factors that you should keep in mind before taking the final decision. The bonus: we will also tell you the cheapest way to cover your health.

What to buy
At present, three categories of players focus on health insurance—the life insurers, general insurers and standalone health insurance providers. They offer many variants of health insurance. However, B. Srinivasan, a Bengaluru-based financial planner, says that they can be broadly classified into three categories. “The first type covers hospitalisation of all kinds; the second gives cash when the insurance holder is hospitalised and the third variety takes care of expenses for critical illnesses and surgeries,” he explains. One must carefully analyse the pros and cons of each policy before deciding to buy one or a mix of these.

Suggests S. Narayanamurthy, senior V-P (underwriting and product development) of Bharti AXA General Insurance: “A customer must understand his requirements, identify the benefits he is looking for, the amount of cover that he may need and its cost. Then he must match these parameters with the products available in the market.” Almost all financial experts agree that the first step should be to buy a convenient and overall policy. “Such policies can cover all the expenses if you or any family member falls ill, as well as the cost of hospitalisation for minor or complex ailments,” says Srinivasan.

Once this is done, you should consider a plan that can help you deal with other costs related to hospitalisation, like the loss of pay for the patient or the family member who spends all day in the hospital to take care of you.

If you still feel inadequately covered and can afford another health cover, go for protection against critical illnesses, surgeries and temporary or permanent disabilities. Finally, you could also buy speciality covers, which are usually for the long term and help reduce the financial strain of the treatment of diseases like cancer and diabetes.

In all these cases, be careful while calculating the amount of cover. Most people underestimate such needs and are saddled with insufficient protection. Also, keep in mind that medical costs tend to increase over time. So what is an ideal sum assured now may be inadequate after a few years.

How to save money
Most people think of medical cover for each family member separately. For instance, to provide a Rs 1-lakh cover for each member of a family of three, you would invariably buy three policies. This is an expensive option. Instead, you can opt for the family floater plan of Rs 3 lakh, which will be less costly. You can also opt for a Rs 2.5-lakh floater policy as it is unlikely that everyone will fall sick at the same time. This is what Delhi-based Sabyasachi Patnaik did (see case study).

Here’s how the calculations work. A basic health policy from Star Health Insurance, which provides a cover of Rs 2 lakh each to three members of a family (father, 35, mother, 32, and a child, 8) will cost Rs 7,776 every year. If the family buys a floater policy of Rs 5 lakh, which is sufficient protection, the annual premium will work out to be Rs 7,000, cheaper by Rs 776.

However, Anuj Gulati, director of ICICI Lombard General Insurance, warns that “the family floater policy is priced according to the age of the senior-most member of the family. Hence, as he grows old, the flexibility decreases and the premium increases.”

Similarly, instead of buying a new policy to increase your existing cover, it may be better to look for top-up plans. Currently, only two companies, Star Health Insurance and United Insurance, have top-up plans that can reduce your insurance costs. For example, a 45-yearold who wants to double his insurance cover to Rs 10 lakh will have to pay an annual premium of Rs 12,316 (Rs 6,158 for each policy of Rs 5 lakh). But with a top-up of Rs 5 lakh, the total annual premium works out to only Rs 7,858.

There’s a caveat. Top-ups are only applicable in the case of extraordinary expenses arising from a single illness, which is over and above the original plan cover. So it does not work in case of multiple illnesses. However, since most people suffer from only one major illness at some point in life, top-ups are beneficial despite the single illness restriction. Another disadvantage is that top-ups are not unlimited and the cover amount is based on the value of the top-up.

What to look out for
Merely buying a health plan isn’t enough. The reason: all plans are structured in a manner that narrows the areas that are covered. This implies that all products have a number of exclusions for which the insurer is unlikely to pay any claim. It was due to such exclusions that there was a long-standing battle between policyholders and insurance firms regarding what the latter considers pre-existing diseases. Insurance firms could, and did, refuse claims if they were proven to be related to pre-existing diseases, but these ailments weren’t defined clearly.

This impasse was resolved recently. A clarification was issued by the General Insurance Council, which now defines pre-existing diseases as ‘any condition, ailment or injury or related condition(s), for which you had signs or symptoms and/or were diagnosed, and/or received medical advice/treatment within 48 months prior to your first policy with us (the insurance firm)’.

So if you were diagnosed as hypertensive, any related complication like diabetes or a hearing ailment will not be covered under a policy due to the pre-existing disease clause.

Elaborating on the condition of ‘48 months’, the Council says, ‘Benefits will not be available for any condition(s) as defined in the policy until 48 months of continuous coverage has elapsed since the inception of the first policy with us (the insurance firm).’ This means that a policy will cover expenses incurred on pre-existing diseases only from the fifth year, provided there hasn’t been any claim in the first four years. “This is why we make the applicants undergo health check-ups to ascertain their medical state,” says Gulati.

Fortunately, today there are policies which cover pre-existing diseases for senior citizens from the second year itself. The premiums for these plans are high. Explains Shreeraj Deshpande, head (health insurance), Bajaj Allianz General Insurance: “Such a policy is underwritten with medical checkups as at this age people are prone to suffer from pre-existing diseases. A normal health insurance plan would either reject any insurance application from this age group or accept it only after a waiting period of four years.” 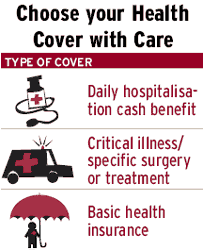 Now that you are armed with critical information, go ahead and choose your health plan. And we can assure you that if you follow our guidelines, you will not be confused like Mehrotra.

Q. Will medical costs be reimbursed from the first day of the cover?
A. Typically, there is a waiting period of 30 days, during which no claims from the insured are entertained by the insurer. This waiting period may vary across companies.

Q. If a claim has been made for a particular ailment, does it become a pre-existing disease for the next policy term?
A. An ailment for which a claim has been made does not become a pre-existent disease if there is no break in the term of the insurance policy and is renewed within the stipulated period. However, the ailment is considered a pre-existent disease and exclusions will apply in the event there is a break in the term of insurance (up to 7 days’ break is allowed under certain conditions, although it could vary for different companies).

Q. Are all the tests prescribed at a hospital reimbursed under the health insurance plan?
A. Expenses incurred on diagnostic tests such as X-rays, blood analysis, ECG, etc, are reimbursed only if they are required for the treatment of the ailment for which the policyholder has been hospitalised. In any other scenario, such claims are not entertained by the insurer.