There are many life insurance policies targeted at women. But unless they offer specific benefits, they may not be the best option for you.

Good morning, madam. Our insurance company has just launched a new plan for women. The plan gives you life insurance as well as cover against several illnesses. It is especially customised to the needs of working women like you…” If you are a working woman, chances are you must have already got such a call from a telemarketer. While there are already several insurance policies targeted specifically at women, more such customised plans are in the pipeline.

There is no doubt that every earning person with dependents needs life insurance. There is also no doubt that women’s needs are fast evolving and are today very different than what they were a decade ago. Single mothers supporting their families are now common.

But before you get taken in by the marketing spiel of the insurance agent, check out the features of the policy. Does it really offer you something that an ordinary insurance policy will not? Or is it luring you into making a sub-optimal choice? The LIC’s Jeevan Bharati policy is a case in point. It is a money-back policy aimed at women. 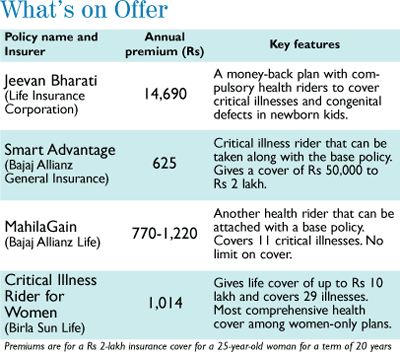 A 25-year-old woman needs to pay an annual premium of Rs 7,345 for a cover of Rs 1 lakh for a 20-year term. The premium for a simple money-back policy with the same cover and tenure would be far less, at Rs 6,273. The Rs 1,072 extra charged for Jeevan Bharati goes into providing cover against certain critical illnesses and even congenital deformities in children born after buying the policy.

If a policyholder is diagnosed with any of the specified critical illnesses— including breast, ovarian and cervical cancer—she will get 50% of the insured amount immediately. The money thus received may help her foot the fat medical bill of the cancer treatment. That’s a real benefit, no doubt.

But not every woman may require such a benefit, especially if she already has health insurance or has no plans to raise a family. The critical illness benefit in Jeevan Bharati is not optional—it comes bundled with the policy. So anybody who sees a benefit in the health rider must also accept the abysmal 6-7% returns of money-back plans.

That’s why women-specific plans work better as optional riders that can be attached to a base policy. For instance, the MahilaGain health rider can be taken by a woman along with a Bajaj Allianz Life Insurance policy.

The rider covers treatment costs due to complications during pregnancy, a condition that most health policies do not cover. Bajaj Allianz General Insurance and Birla Sun Life also have insurance riders for the illnesses covered by Jeevan Bharati.

In fact, the critical illness rider for women accounts for 20% of the premium income from health riders at Birla Sun Life. “Considering the potential in this segment, we may introduce more women-specific insurance products in future,” says Anjana Grewal, senior vice-president, marketing and communication, Birla Sun Life.

While that is heartening news, women must assess a policy before jumping in. As T. Srikanth Bhagavat, managing director of Hexagon Capital Advisors, says, “Unless they offer reasonable advantages to policyholders, woman-specific plans would remain marketing gimmicks.” Clearly, instead of policies that claim to be women-friendly, it would be better if insurance companies came out with products that are customer friendly.

Age at a discount

It’s what many women dream about—being considered younger than they actually are. But this is exactly what happens when a woman takes a life insurance policy. She is considered three years younger than a man of her age. In life insurance, the younger you are the lower is your premium. So a 38-year-old woman will pay a premium equal to what a 35-year-old man pays for a similar life cover.

There are no sociological reasons or women’s empowerment motives behind this discounted rate, just plain biology.Women tend to live longer than men. The average life expectancy of a woman is 67.2 years while for a man it is 65.6 years. As Azim Mithani, chief actuary of ICICI Prudential Life Insurance, explains, “Since women have a different life expectancy compared to men it calls for a differential premium.” Also, diseases such as severe heart illness and diabetes are more common among males than in females.

Says Bryce Johns, development actuary and CIO, Kotak Life Insurance: “They may have the same insurance needs in terms of cover but men and women suffer from different instances of life threatening ailments.” Hence, the lower premium charged. Ironically, the government-owned LIC does not offer any discounted premium rates to women because of the poor health-care infrastructure in the country.