How to file claims for missing persons, losses suffered in natural calamities

In insurance parlance, a natural calamity that leads to losses such as in the recent floods in Uttarkhand are called 'Acts of God'. The claims procedure can be complicated as policy documents may not available in most cases and there may be no proof of death.

Chandralekha Mukerji
In insurance parlance, a natural calamity that leads to losses such as in the recent floods in Uttarkhand are called 'Acts of God'. The magnitude of losses, both to life and property, in the state is enormous. In fact, the death toll could far exceed the number of bodies found.

The flash floods swept away many who may never be found. Many will be eventually pronounced as 'missing'. To help the relatives of those 'missing' in the floods, Finance Minister P Chidambaram has asked the country's largest life insurer, Life Insurance Corporation, or LIC, not to insist on the condition that seven years must pass before the claims of relatives of the missing are settled. He said LIC could ask claimants in such cases to sign indemnity bonds so that the claims could be settled quickly. He also asked LIC to set up a team to settle the claims of those affected on a centralised basis.

These decisions are important because in cases where there is no physical proof of death, the claim settlement may take years.

"For missing cases, as per Section 108 of the Indian Evidence Act, presumption of death can be made only after seven years from the date the person is reported missing. After the lapse of seven years, the nominee or legal heir has to submit the FIR and the non-traceable report issued by the police along with the court order (presuming the person dead) for claim settlement, along with other necessary documents," says Vishal Chopra, executive vice president and head of operations, DLF Pramerica Life Insurance. This has to be supported by other documents.

While LIC may heed the finance minister's directive and not insist on the seven-year condition*, private sector insurers may hasten the process only if there is a government declaration about the missing being "presumed dead".

"If the government announces the missing as 'presumed dead', the company will supersede the claim procedure and settle claims faster," says Chopra.

"Usually, a death certificate from municipal authorities is required. However, in this case, we will accept the list issued by hospitals or police/armed forces if the municipal death certificate is not available," says Kalpana Sampat, chief, Branch Operations, Underwriting and Claims, ICICI Prudential Life Insurance.

Since dust is yet to settle in the hills, most companies have not received any claim. However, some have set up special cells to deal with such cases.

"In August last year, when there were flash floods in the Leh-Ladakh region, our company reached out to the victims' families and settled quite a few claims. However, civilian movement is still restricted in the Uttarakhand region and it is, therefore, difficult for us to reach these people," says Sampat of ICICI Prudential.

In the meantime, the claim-care helpline is active round the clock.

"We have released alerts to our service locations which are close to the affected areas and reached out to our policyholders and informed them to connect directly with our helpline numbers for assistance. This will continue till the situation stabilises," says Chopra.

HOME AND MOTOR
The floods have also caused destruction of personal property on a huge scale. A comprehensive home or shopkeeper policy has a catastrophe cover for the structure of the building and its contents. However, the claims procedure can be complicated as policy documents are not available in most cases.

"The surveyor may rely either on other documentary evidence of existence or ownership like the sale deed in case of property or physical evidence at the scene to assess the loss," says Amarnath Ananthanarayanan, MD and CEO, Bharti AXA General Insurance.

Houses or vehicles that are washed away are put under the 'complete loss' category. In such cases, full sum insured can be claimed. Otherwise, one gets money for repairs. "Regular deductibles apply, as in case of jewellery and domestic appliances (usually up to 20% of sum insured)," says Divya Gandhi, head, General Insurance, Emkay Global Financial Services.

HEALTH COVER
Some victims may need medical care, which in the immediate aftermath may be funded by the government. However, all may not receive help from the authorities. In such a situation, if the insurance documents are not available or the policyholder is treated in a hospital that is not part of the insurer's network, one can file for reimbursement of the medical bill later.

"In emergency situations, we are liberal and proactive. In the past, for example during the Mumbai floods, there have been cases where policyholders have lost their documents but their claims were processed on the basis of policy numbers and basic verification documents," says Antony Jacob, chief executive officer, Apollo Munich Health Insurance.

The claims are processed in the same way as in any other situation. The customer has to pay the bill and then claim the amount from the insurer. Original medical bills will be the basis of the claim. "It is only in case of personal accidents that claimants are asked to produce a government-issued death certificate," says Jacob. 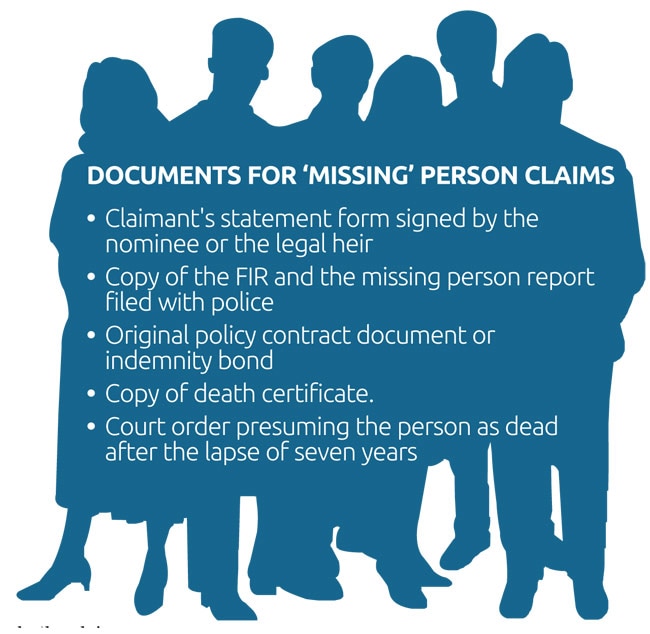 *The story was written before LIC decided to ease claims norms at the behest of the government.