Microsoft entered India in 1990, and since then it has played an important role in boosting the country’s economic growth. As Microsoft India—part of the Redmond, Washington-headquartered Microsoft Corp. that had a market capitalisation of $2 trillion as of July 7—continues investing in India, there is a huge chance that the country will become a big play globally for the tech giant from a business point of view, says President Anant Maheshwari. In a freewheeling interaction with Business Today’s Sourav Majumdar and Nidhi Singal, Maheshwari, 49, talks about the adoption of digital transformation by India Inc., the threat landscape, and the way forward. Edited excerpts:

Q: It is the end of the year for Microsoft (the tech giant follows a July-June fiscal year). How has the last year been and what will be the broad agenda going forward?

A: I’ll start with where we are for Microsoft globally; we’ve been on this transformation journey for the past eight years, ever since Satya [Nadella] took charge of the company [as CEO]. It started with the mission of empowering every person, every organisation on the planet to achieve more, and pretty much in the same way, we’ve been going at it in India. I’ve been part of the company for nearly six years now. I’ve seen this first-hand... how we operate to transform and deliver that vision on a daily basis to our customers and partners in the country.

Specifically coming to Microsoft India’s performance, we are now on track to complete our fourth best-year-ever in succession... It’s not just in terms of financial metrics, in terms of how we’re looking at the business, but truly making an impact on the landscape of companies that we work with. Today, we work with almost all of the country’s top banks, top IT services, top conglomerates, a large number of unicorns, and many state government and central government ministries. So, if you look at the landscape as the big markers of the economy in India, very strategic work [is] being done with all of them on the public cloud; we are also driving very good progress in the broader SME and start-up ecosystem.

From a customer landscape point of view, the breadth and the depth of what we are doing give us a lot of satisfaction in achieving our mission. And the partner ecosystem that we have in the country is quite unique… everything we do in the market is through our partner ecosystem. The partner ecosystem for us is not just a... go-to-market channel where we transact with the partner, and the partner transacts with the customer. But more importantly, it’s the broader ecosystem with all the big advisories in the country—both global and Indian—that are driving a lot of the solutions that people need rather than pointing [to] products that they might use from a tech perspective. The second bit is the system integrator (SI) network, that is the global SIs from India. All the big IT firms [in India] are creating solutions here that they’re taking global. And they are now doing it at a scale which is bigger than many of the global companies. And so I do believe that that’s a huge opportunity of India becoming a big play for Microsoft globally from a business point of view, and not just from a talent point of view.

And finally, what excites me the most is the independent software vendor (ISV) ecosystem, which are the B2B SaaS [Software-as-a-Service] companies. It’s really a big wave that is happening in India at this point in time and Microsoft is enabling all these B2B ISVs to find customers very quickly for [the] Azure Marketplace globally.

Q: You deal with a host of companies. What is your sense of the digital transformation journey that India has undertaken?

We do a Future of Work survey every few months. For India, the Work Trend Index survey [that released in June 2021] found that nearly 74 per cent of people in the country want more flexibility—that means more remote work options—while at the same time 73 per cent are also craving more in-person time with their teams. At least half are at an intersection as they want both. What that basically means is that technology is going to take on a central role in the future of work.

Now, the future of work is hybrid, especially in large groups. We’ve [also] learnt that the work signals continue pre-meeting and post-meeting. Therefore, a lot of technology is being thought through as to how do we continuously engage and get work done? That’s one big trend line that is causing hybrid work to be a definite future of work. The hybrid [model] will be different for different companies and within a company for different teams. The metaverse will facilitate these interactions.

Now I will build on pure data, public cloud usage—that is a very big part of technology. Digital natives or unicorns always had a lot of born-in-the-cloud kind of capabilities. They were always working to use technology to build their core systems. One sector that has changed most dramatically in the last two years is the Indian banking sector—[that has a] very high comfort of using the public cloud—[and] are now leveraging data, AI and ML. The other place I [have] seen this trendline work very differently, in terms of the leverage of tech data, is in many of the government capabilities. The public platforms that are being created in the government, such as Aadhaar and UPI, are now stepping into the health platforms, labour platforms, agri platforms, skilling platforms—[they] will have huge leverage of technology, where you can use services sort of 24x7. The third vertical is healthcare, [which is a] great place to think about how the leverage of tech is changing. [It was] partly caused by the pandemic, where medical practitioners—both doctors and nurses—and hospitals became comfortable connecting with their patients [online].

Q: How has the threat landscape evolved and what is Microsoft doing in this space?

A: [The] threat landscape is the biggest conversation that I have with almost every stakeholder who is thinking about technology. It’s estimated today that the global economy is getting affected by cybercrime to the tune of around $6 trillion a year. That’s roughly about 7-8 per cent of the global GDP and that’s only going to increase. So it is a very realistic, big economic imperative to work on cybercrime and all kinds of cyber threats.

Second, the geopolitical landscape globally has caused nation-states to get involved in driving some of the cybercrime and they could be targeting enterprises that are private or commercial. Therefore, cybercrime is not just increasing but the threat of it is going up because it can affect critical industries in the country of the target.

If you see our business, just security—including cybersecurity and many other elements of trust—is the largest such business on the planet. In terms of comparison, if you take a pure-play cybersecurity company, we would [be] multiple times the size of it. Just last year, we were looking at 8 trillion signals a day, and that creates machine learning and a lot of capability. Just in one year, that has gone up to 24 trillion signals.

We have already announced that we will invest over $20 billion over the next five years [globally] to advance our security solutions. I mentioned the scale of the business a little while ago... It’s more than $15 billion annually—just the revenue that we have on our security business globally. 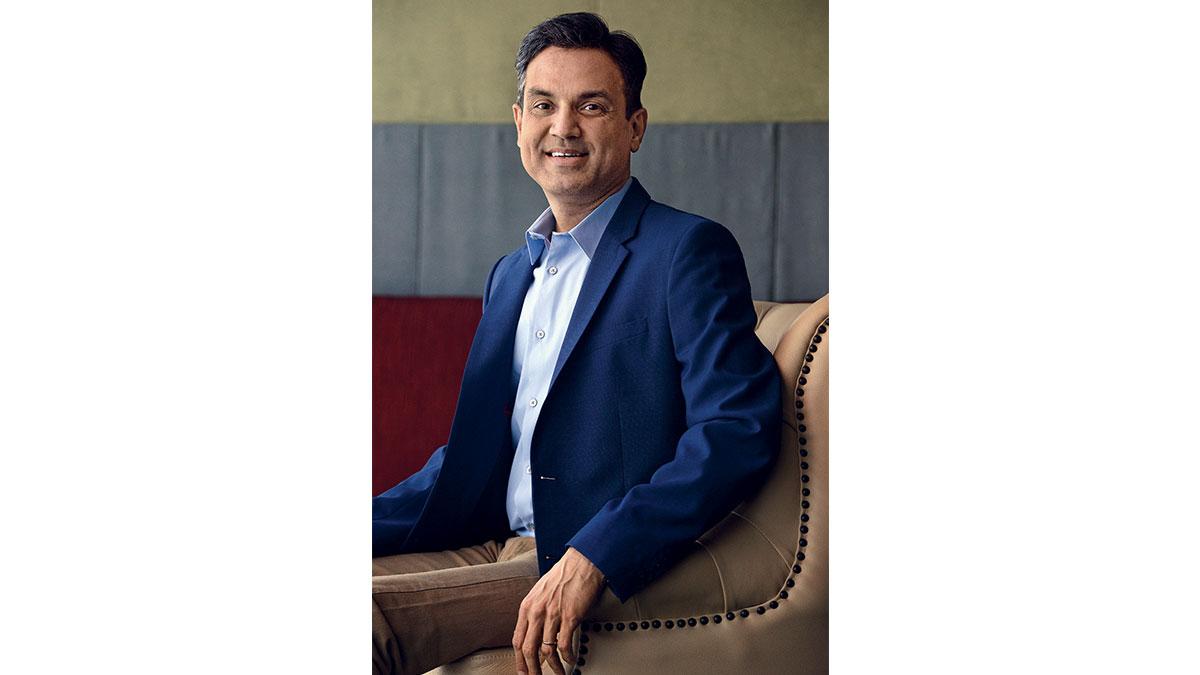 Q: You spoke about security, data, metaverse… what kind of investments are you making in India right now?

We also announced our Availability Zones in the Central India data centre region in 2021, which creates a higher level of resilience—if one data centre goes down, you can quickly migrate traffic to [another data centre and] continue the work as required.

The other piece of work that we have done is a few years ago, we announced our partnership with Jio and building the Azure data centre footprint uniquely for them. It is a very unique global partnership, where they’ve [Jio] taken a very long-term view of what they will build for the country, and then how Microsoft will provide its technology and the Azure capability to build a public cloud. And those data centres are now fully built and are being used. [Also,] we announced a few months ago that we will build our biggest data centre in India in Hyderabad—an absolutely new region.

All in all, the Microsoft data centre network in the country is amongst the largest and most scaled of all the public cloud networks that you will see in India. We always invest ahead of the curve.

Data centres are the factories of today. They’re not just buildings where you’re storing machines because at the end of the day, they create a resultant economy around them. And there’s a lot of value that gets created. IDC estimated that if you just look at the Microsoft data centre capacity in the country, it may be creating economic value of more than $9 billion in the entire network. And that is just the tech-related kind of work.

To me, that’s the kind of investment we will continue to make and we are thinking about how the whole public cloud platforms will get used for education, for healthcare, for governance, for agriculture, for skilling—all very core sectors in India—and therefore we are kind of driving the investments in a look-ahead fashion.

Q: Microsoft works very closely with start-ups. Among them, there is the tech start-up story that is currently building out. How do you see this progress and what are the sectors in which you think technology will play a greater role as far as start-ups are concerned?

A: I was [recently] at a seminar where we spoke about entrepreneurship, innovation, and technology. And one of the panellists used this example, that they’re building a massive supply chain in the country, which is a hard asset. Then I [asked], ‘What’s the role of technology in this?’ He basically said, ‘Technology is enabling me to create everything as a capability’. I loved the simplicity of that term... [While building the supply chain, they were] able to take hard assets, big problems, solve them, and marry them so deeply with technology that not just them, but many others will use the service. So, the ability to marry the brick-and-mortar economy with a services economy is a very powerful GDP multiplier as we go forward, and that logistics network is not just going to help that particular unicorn; it’s going to help many companies.

At the end of the day, it’s all about how much data you can harness and create better models [with the data].

@TheSouravM, @nidhisingal. This interview took place before Microsoft announced its results for fiscal 2022