After the bribery case involving Syndicate Bank and Bhushan Steel, the stocks of the companies fell sharply. Does it make sense to buy these shares at this point?

On August 2, the Chairman and Managing Director of Syndicate Bank was arrested for allegedly receiving a bribe of Rs 50 lakh to increase credit limits of Bhushan Steel.

Does it make sense to buy these shares at this point? Let's find out.

The company's strength is its dominant position in the domestic market. Weaknesses include rising costs, lack of investment in research and development, high interest rates, government regulations and inquiry by the Central Bureau of Investigation. "The fall in Bhushan Steel shares is mainly due to corporate governance issues. First, it was named in the coal scam. Now, its name has come up in the Syndicate Bank bribery scam," says Nikhil Kamath, director, Zerodha, an online brokerage.

Bhushan Steel, which has fund and non-fund exposure of Rs 40,000 crore to about 51 banks, is struggling to raise Rs 6,000 crore equity capital to convince lenders. Banks, on their part, have stepped up pressure and are asking for three seats on the board, a forensic audit of accounts and appointment of an external agency to oversee the daily cash flow.

Bhushan Steel registered a net loss of Rs 141.63 crore for quarter ended June as against a loss of Rs 76.26 crore in the corresponding quarter last year. On September 1, it was trading at a price-to-book value, or PB/V, of 0.24.

Experts say investors must ignore the stock for now. "Though the stock looks reasonably valued after having corrected 70%, the impending court verdicts and CBI inquiry could take it anywhere. Hence, we would advise against entering the scrip right now," says Kamath of Zerodha.

However, Sharmila Joshi, equity market analyst and blogger says, "One can look to buy the stock if the company can find a solution to the problem of funding its huge expansion plan and there is clarity on appointment of the managing director." 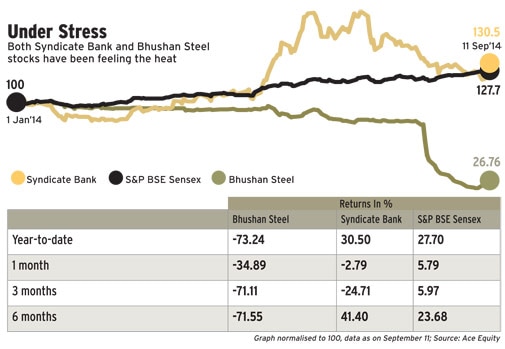 The stock fell 33% from Rs 175 on June 30 to Rs 123 on September 1. The reason was the rise in non-performing assets, or NPAs, in the quarter ended July 31. The bank reported gross NPAs of 2.65% in 2013-14, the highest in the last five-six years. Rohit Gadia, founder and chief executive officer, CapitalVia Global Research, says, "Another reason was the bribery case. The stock fell 10% after the scam broke."

The government holds 67.39% stake in the bank. Market experts believe that misconduct by a few senior employees does not mean the bank will collapse. Its key strength, a strong branch network, remains, they say.

But the biggest problem is the worsening asset quality. During the quarter ended June, fresh slippages were Rs 1,500 crore compared to Rs 1,197 crore in the previous quarter and Rs 1,304 crore in the corresponding quarter last year.

DK Aggarwal, chairman and managing director, SMC Investments and Advisors, says, "At Rs 119.55, the stock is trading at a P/BV ratio of 0.69, lower than its five-year average of 0.80. Even though the valuation is attractive, the bank's performance has been weak overall. The pressure on asset quality may continue to rise. Therefore, investors should closely monitor earnings for the next two quarters and start accumulating the stock if there is some improvement in asset quality." On September 10, the stock was at Rs 120.65.

Gadia of CapitalVia Global Research says, "Syndicate Bank is looking bearish on the charts for the short term and can test Rs 98-99. So, our advice for the retail investor will be to avoid the stock for fresh buying. Fresh positions can be created near Rs 100, with stop-loss at Rs 75. The stock is likely to bounce from Rs 75. It may touch Rs 200 in the coming years if it manages to remain above Rs 75."