Invest in contrarian stocks, but with caution

We have all heard that it takes courage to swim against the tide. When it comes to markets, it is no different. Remember the drum rolls that preceded the launch of infrastructure funds about six years ago? Remember how every expert worth his salt wanted you to have a bite of the biggest thematic cake in the making? Even now, most of those investments have not turned green, let alone deliver. But contrarian investor would have done the research and avoided these funds. In retrospect, it sounds like a good decision, right?

As the word suggests, a contrarian investor seeks to reason not just against the popular opinion, but does so after careful and copious research since the plan can go horribly wrong if executed half-heartedly. It is painful to lose your hard-earned money anyway in the markets, but if you lose money taking a contrarian stance, you will end up as a butt of all market-related jokes for the foreseeable future.

Taking a contrarian stand is a complex position, especially when the markets are abuzz. The recent election results have ushered in a period of investment euphoria, supported further by reports of an increase in construction activity. But a recent economic alert by Standard Chartered sounds a note of caution. "A favourable base effect and delayed rains likely boosted construction activity and production of construction-related materials. The revival in domestic demand has yet to provide support to manufacturing activity; the favourable base effect for mining and electricity might fade in the coming quarters," says the report dated August 11. This could in effect dampen the sentiment in the overall market and hence, investors may look to deploy money in IT and FMCG sectors. This raises a pertinent question for investors: Are these defensives the new contrarian?

If the rupee appreciates, tech and pharma will be the sectors to avoid

Sankaran Naren, CIO, ICICI Prudential AMC believes that if one looks at the price-to-earnings ratio, most of the consumer stocks are still trading at about 30 times the current earnings. "We continue to be underweight on them, but having said that, the business models are robust and if there is a slowing down of the monsoon, it would affect this sector as much as it affects the auto sector. We believe that the sector is not attractive at this point of time but if the valuations were to correct, it will offer a reasonably good investment opportunity for the long term," says Naren. He believes that IT and pharmaceuticals are fairly valued sectors, adding that whenever there is a global risk-off, these are likely to outperform the market on a correction. Adding a further word of caution, he says, "If the rupee appreciates, both tech and pharma will be the sectors to avoid, but if the rupee stays either stable or depreciates marginally, tech and pharmaceuticals will become reasonably attractive. We do not believe there is a material undervaluation in any large-cap tech or pharmaceutical stock at this point of time."

Sachin Shah, fund manager at Emkay Investment Managers, adds: "Export-oriented companies have a good opportunity to perform because of two factors. First, the depreciation of Indian currency has made Indian companies competitive. If we remove sector-specific competition from other countries, the main competitor for India is China and with the appreciation of the Renminbi, the competitive advantage has narrowed." He also mentioned that clients have started looking at country-specific concentration risk. Hence many companies would be coming to India. Lalit Thakkar, managing director-institution, Angel Broking, believes that IT and Pharmaceutical sectors provide structural upside due to weak currency and strong cash flow combined with reasonable valuations. He further added that the infrastructure companies and PSU banks remain a challenge since the economy is not turning around at the same pace as improvement in their valuations warrant. Besides, many structural issues in these sectors will take time to be resolved, which has not been factored in by investors.

Vinay Kumar Agrawal, equity research analyst, WealthRays Securities, adds, "Equity markets around the world have been volatile due to various economic data and policy decisions. The geopolitical environment has also not been stable and tensions in various part of the world are having a direct impact on equity markets." If this global scenario continues, more money can be expected to flow into defensive sectors like pharmaceutical and FMCG. Meanwhile, Rakesh Tarway, VP and head-equity strategy, equity and derivatives products, Motilal Oswal Securities, points out the positives about FMCG and IT. "During the last one month, CNX FMCG and CNX IT have recorded gains and have outperformed Nifty by 5% and 4% respectively."

It will be myopic to imagine that all contrarian opportunities lie only in equity. Debt is also currently offering good options, as Naren points out. "We believe that the real contrarian investing is seen in long-duration fixed income which is attractive on a valuation basis." Tarway of Motilal Oswal believes the opportunities lie elsewhere: "After a rally of close to 50-100% in cyclical, it is prudent to increase exposure to defensives like IT and FMCG."

But good opportunities can also be found in other sectors as Anand Shah, associate director, BNP Paribas, points out: "Telecom and cement have good fundamentals and there hasn't been much of a run-up in these two sectors. Also, if we look at companies that can deliver on expectations, then private sector banks and auto ancillaries will make for a good bet in the long term," he adds.

Meanwhile, Sachin Shah of Emkay believes that no sector as a whole is undervalued. The IT sector has reasonable valuations but the business has become more commoditised. "It is now more about how IT companies add value to the service they are providing. Companies that bring innovation will show better earnings growth," he says.

"Among the IT large-caps, Infosys and Wipro are attractively placed," says Thakkar of Angel Broking. He points out that both companies are going through a transition making it possible for them to capitalise on productivity improvements. Another software major, TCS, had shown better results than its peers this quarter and outperformed the industry growth. Agarwal of WealthRays Securities says, "Eventually the stock can be seen trading around Rs 2,800 levels. Any depreciation in the rupee will benefit TCS in the near term."

Among the FMCG sector, experts consider ITC to be a steady stock. "Increase in cigarette prices is expected to adversely affect volume growth but ITC plans to enter businesses like dairy and beverages, reducing its dependency on cigarette business income. Though food inflation and delayed monsoon will affect its profitability, compared to other sectors, inflow is likely to continue into defensives as global volatility continues," says Agarwal, who recommends Lupin in the pharma space. In the near term, the market is expected to show a downward move led by the mid- and small-cap stocks in sectors such as auto, making a heavyweight Nifty stock like Lupin a major attraction for investments in the pharmaceuticals sector. 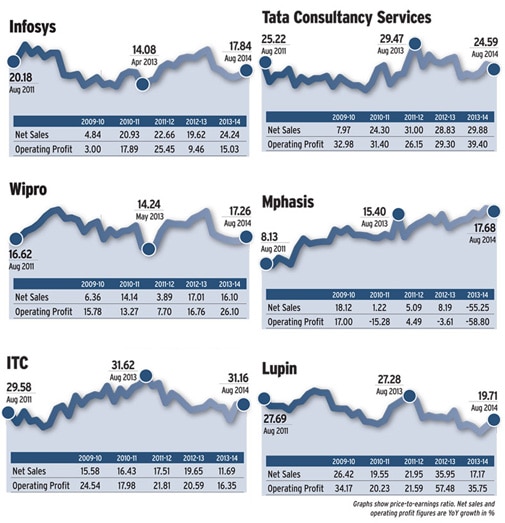 Ready to bet on these companies?
Click here to Enlarge