We discuss features of longer term FMPs that fund houses are coming out with in response to the new tax rules.

When 2014's Union Budget changed tax rules for capital gains on debt funds, the most affected category was fixed maturity plans or FMPs. The government not only increased the period for capital gains to be considered as long term from one to three years, it also removed the option of long-term gains being taxed at 10% without indexation.

While the latter has had no impact (as taxation after indexation lower tax), increase in the period for long-term capital gains has left investors high and dry.

This is because FMPs have been using the earlier rules-which allowed investors to claim long-term capital gains benefits after one year-to good effect to give investors decent short-term post-tax returns by taking little risk.

Now, the new three-year threshold has done away with the tax benefits of short-term FMPs, reducing their attractiveness for retail investors and high net worth individuals. Capital gains on a debt fund investment held for less than three years would now be considered short term and taxed according to the person's income tax slab. Besides, there is now no indexation benefit for shortterm capital gains. This benefit will kick in only after three years as against one year earlier.

This has forced funds to launch FMPs with a maturity period of three or more years.

Before we talk about how threeyear FMPs are different from oneyear FMPs, let us see why one-year FMPs were so popular.

FMPs are close-ended funds which buy securities with tenures similar to their own and hold them till maturity. This means the only gains are from coupon payments and not increase in prices of the securities. This way they avoid volatility, though this means investors lose out on capital appreciation benefits. But what attracted investors to FMPs was their tax efficiency. Mutual funds used to launch FMPs with tenures of just over a year (such as 370 or 375 days). This is because by investing for 5-10 days more than a year, investors could avail of indexation benefits for two years. This means the purchase cost was adjusted for inflation twice to arrive at capital gains (See Indexation Benefit). 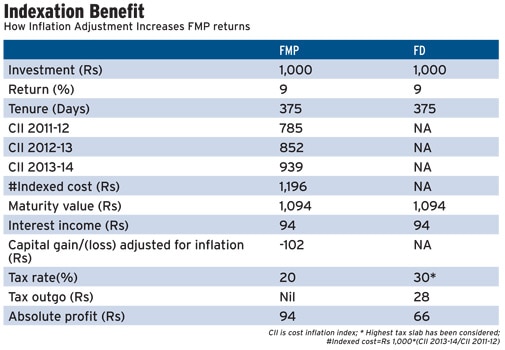 How different are FMPs now Portfolio:

As FMPs are closed-ended funds which hold investments till maturity, they try to invest in securities with tenures similar to their own. So, a 370- or 375-day FMP would primarily invest in certificates of deposit (a time deposit scheme of banks in which the rate of interest is negotiable), commercial papers (short-term debt papers issued by banks) and treasury bills. All these are short-term debt securities with maturity of two days to one year.

On the other hand, three-year FMPs will invest in corporate debt. Most corporate bonds that FMPs buy are rated AAA and AA, considered highly safe in terms of ability to pay interest and principal.

Longer term bonds usually carry more risk but offer better yields, especially those with lower credit ratings. So, AA-rated bonds' yields would be usually higher than that for AAA-rated bonds.

AAA-rated three-year bonds are trading in the range of 9-9.5% while AA-rated bonds are above 9.5%.

Risk: FMPs will now hold longer tenure bonds. This will make them riskier than short-term FMPs. The reason is that long-term bonds are more volatile due to changes in interest rates.

"Everything else remaining the same (ratings, coupon, etc), prices of long-term securities are likely to be more volatile than that of short-term securities," says Dwijendra Srivastava, CIO, fixed income, Sundaram Mutual Fund. However, due to the fact that FMPs mostly hold securities till maturity, the interest rate risk is mitigated to a large extent. "As FMPs follow the hold-to-maturity strategy, they will continue to be less sensitive to interest rate movements," says Renu Pothen, head of research, fundsupermart.com.

Liquidity: With a longer lock-in, three-year FMPs are more illiquid than the one-year ones. Though FMPs are traded on exchanges, the volume of trading is negligible. Thus, liquidity is an issue.

"Investors have to reconcile to the fact that they will remain locked in for three years. Liquidity can be an issue as FMPs are thinly traded in the secondary market," says Amandeep Chopra, head of fixed income, UTI Mutual Fund.

However, if you have a time horizon of three years, FMPs can still be a better bet than bank fixed deposits due to indexation benefits. Moreover, given the attractive yields being offered by corporate bonds, it makes sense for those with low risk appetite to invest in three-year FMPs.

One-year FMPs are no longer very tax efficient. They are on a par with fixed deposits. So, where should an investor who has a horizon of just over one year invest?

Investors who are ready to take a little more risk can invest in openended short-term income funds and ultra short-term funds.

Given the fact that interest rates have likely peaked and the Reserve Bank of India may start cutting rates by next year, investing in open-ended debt funds, which take interest rate calls, may be good option in the short and medium term.