Mid-cap firms have over the years shown a faster rate of growth, making them ideal investment options for the long term.

Dipak Mondal / Money Today
At a time when the global equity markets are overcast with fears of a double dip recession, to even talk about investing in stocks can be considered a cardinal sin. But as a personal finance magazine, we have always maintained that one should invest for a long term in select stocks in a staggered manner without getting swayed by short or medium-term negative sentiments.

In the second part of our series on Mid-cap Bets, we bring to you from the mid-cap space 10 more stocks, which have the potential to grow into large-cap companies in the next 5-10 years, given the opportunities in their respective sectors, order flows and strong balance sheets.

While selecting the 10 stocks, we considered parameters such as sectoral advantage, top line and bottom line performances over the past 4-5 years, immediate policy boost, balance sheets and financial ratios like debt-equity ratio, return on equity (RoE) and price-earning multiples.

CHAMBAL FERTILISERS
Chambal Fertilisers is one of the large private sector fertiliser companies in India. It makes nitrogenous fertiliser (urea) in two plants in Kota, Rajasthan. It has subsidiaries in agriculture products, shipping, textile and software sectors.

The company is set to gain from two policy measures in the fertiliser space-partial decontrol of urea prices under the nutrient-based subsidy scheme and buying back of fertiliser bonds by the government.

Urea is the only fertiliser that is under full government control. Recently, a group of ministers has approved partial decontrol of urea.

Click here to Enlarge
There is also a buzz in the market that the government will buy back fertiliser bonds worth Rs 7,000 crore at a discount and compensate fertiliser firms with 50 per cent of the losses incurred by them due to selling at subsidised prices. The company will also gain from high urea prices and the demerger of the shipping division, which the management believes is hurting growth.

ELECON ENGINEERING
The 60-year old company is a pioneer in manufacturing material handling equipment such as elevators and conveyors. It has also diversified into manufacturing of gear boxes. Elecon is one of Asia's largest gear manufacturing company with presence also in Australia, Africa and Europe. 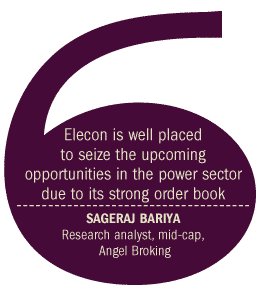 A healthy order book at the end of the June 2011 quarter and strong order inflows are expected to support the company for a long time. At the end of June 2011, the company's order book was Rs 1,600 crore. It got orders worth Rs 320 crore during the year.

The company has estimated 25 per cent growth in revenue to Rs 1,450-1,500 crore in 2011-12 on the back of strong order book and satisfactory progress in order execution. The management expects orders worth Rs 1,500-1,700 crore in the current financial year.

Performance and valuation: Elecon Engineering reported a 12.5 per cent increase in revenue to Rs 1,173 crore and a 32 per cent rise in net profit in 2010-11.

GLENMARK PHARMA
The company makes branded and generic drugs with the former accounting for 60 per cent revenue in the June 2011 quarter. The domestic and the US markets accounted for 55 per cent sales.

In the second quarter, it plans to file for four products and expects to launch seven products. The company's five chemical and biological molecules are in different phases of trials.

"When most Indian companies are shifting to generics, Glenmark has been focused on research and development (R&D) for developing new molecules," says Vinesh Menon, deputy CEO, online investments and stock broking, Bajaj Capital.

GUJARAT PIPAVAV
The country's first private sector port is promoted by APM Terminal, one of the biggest port operators in the world. The company, which got listed in September 2010, has exclusive rights to develop and handle the Pipavav port till 2028.

The port's location on the west coast gives it an edge. This makes it a natural choice for vessels coming from and going to West Asia, Africa and other important international destinations. Given the congestion at the Jawaharlal Nehru Port Trust in Mumbai, it is well positioned to attract more traffic.

Performance and valuation: The company reported a 30 per cent increase in revenue in 2010 to Rs 284 crore, though it posted a loss of Rs 50.9 crore.

According to an estimate by brokerage house Prabhudas Liladhar, the company's revenue may increase by 40 per cent to Rs 400 crore.

IRB INFRASTRUCTURE
The company is a major player in the road sector. It works on the build-operate-transfer model and has built 2,000 km roads so far.

Click here to Enlarge
The company has an order book of Rs 11,171 crore. It has bid for the Rs 2,970 crore, 330-km Shivpuri-Dewas four-laning project on National Highway-3 in Madhya Pradesh. IRB, along with partner Reliance Infrastructure, is also pre-qualified to bid for the Rs 5,390-crore Kishangarh-Ahmedabad six-laning project.

The company is planning to raise up to Rs 1,200 crore through preferential share issue and private placements.

Though the company's debt doubled in 2010-11, the debt-to-equity ratio was a comfortable 0.88 at the end of the last financial year.

NIIT has a strong order book. It reported new orders worth Rs 380 crore in the June quarter, taking the total to Rs 900 crore, to be executed over the next 12 months. The company entered into a joint venture with Morris Communication for IT and BPO services. The venture will ensure orders worth Rs 370-380 crore over the next five years. The company will invest $3.2 million (Rs 14.4 crore) to own 60 per cent in the venture.

"The company was ranked number one globally among IT outsourcers in a travel industry survey. It has major airlines such as British Airways, Cathay Pacific and Emirates as clients. It is focused on core competence and has grown exceedingly well," says K Jayaraman, research associate, Bonanza Portfolio.

ORCHID CHEMICALS
Orchid Chemicals is engaged in the whole range of activities in the pharmaceutical business right from discovering a drug to its delivery. It has five manufacturing units in India and one in China, besides two R&D units in Chennai. It is present in more than 70 countries.

Orchid Chemicals has sought approval for manufacturing 42 generic drugs from the US Food and Drug Administration. Eight of these are first-to-file (FTF) applications. An FTF approval allows a patent challenger six months to exclusively sell generics after the patent held by the innovator company expires.

The company also has an exclusive 10-year supply agreement for API with Hospira for the acquired generic injectable business.

Performance and valuation: After a strong performance in 2010-11, when it reported sales growth of 37 per cent, the company posted a 23 per cent increase in revenue to Rs 374 crore in first quarter of 2011-12 compared to Rs 303 crore in the corresponding period of the previous year.

TECH MAHINDRA
Tech Mahindra, a joint venture between Mahindra Group and British Telecom, is an IT and BPO company with focus on telecommunications. It acquired Satyam Computers (now called Mahindra Satyam) in 2009.

It sees a huge opportunity in emerging markets due to new spectrum licensing, increase in broadband penetration and growth in demand for value-added services.

"Tech Mahindra has de-risked their dependency on British Telecom and is now spread across verticals like financial services and engineering," says Vinesh Menon of Bajaj Capital.

Tech Mahindra has got a five-year contract from a leading mobile service provider in Australia. It will be a strategic partner responsible for consolidating and managing the entire systems stack and associated services. It has also been selected by a leading West Asian service provider for transforming the legacy platform.

Tech Mahindra, through subsidiary Canvas M, will roll out 2G/3G devices for a US telecom company.

However, a gloomy economic outlook in the US and Europe combined with the movement of the rupee against the dollar remain a major worry.

TIME TECHNOPLAST
Time Technoplast is a polymer company with a portfolio that includes industrial packaging products, lifestyle products, automotive components and construction material. It has over 40 production units across the globe.

It has operations in India, the UAE, Bahrain, Thailand, Poland, Egypt, Taiwan and China, among others. In 2010, it bought companies in the Czech Republic, Romania and Taiwan and set up units in South Korea and China. In India, it set up a unit in Tamil Nadu and diversified into waste management.

All these "organic and inorganic initiatives taken in 2010-11 will yield results in 2011-12 and beyond," said a Motilal Oswal report. 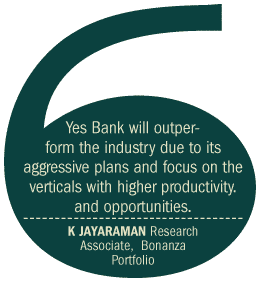 It is aiming for a current account saving account, or CASA, ratio of 30 per cent, as against 10.9 per cent on June 30, 2011. Among industry peers, CASA deposits account for 49 per cent of HDFC Bank's total deposits and 41 per cent for ICICI Bank. A higher CASA ratio is a good indicator of a bank's health as the interest paid on these deposits is low.

Performance and valuation: Yes Bank posted a net profit of Rs 216 crore in the April-June quarter, an increase of 38 per cent over the corresponding quarter of the previous year. The revenue grew 77 per cent to Rs 1,564 crore.

"This bank will outperform the industry due to its aggressive development plans and focus on the verticals with higher productivity and opportunities," says K Jayaraman, research associate, Bonanza Portfolio.