How you can benefit from legendary investor Peter Lynch's strategy

Peter Lynch is a rock star for investors around the world. One reason for this is his extensive writings where he shares, in a simple manner, how he invests. Money Today tells you how you can benefit from his investing strategy.

Peter Lynch is a rockstar for investors around the world. One reason for this is his extensive writings where he shares, in a simple manner, how he invests. The bigger one is, perhaps, that under his stewardship as fund manager, Magellan returned an astounding 29% a year on an average. The fund beat the S&P 500, its benchmark, in 11 of the 13 years (1977-1990) during which Lynch was the fund manager. "Read 'One Up on Wall Street'...you will learn what made Lynch a great investor - a core philosophy that was sound, a set of unique tools that worked and an investing world view that was grounded in reality," says Aswath Damodaran, Professor of Finance at Stern School of Business, New York University.

"In my view, this is one of the very good books which investors with interest in long-term wealth creation should read. Lynch has an excellent record and tells you without jargon how he did it. He lays out his system of thinking about businesses using common sense principles," says Sanjay Bakshi, Adjunct Professor at Management Development Institute (MDI), Gurgaon.

Vikas V Gupta, fund manager, Alpha L50 (India), Arthveda Fund Management Pvt Ltd, says, "Peter Lynch was a versatile fund manager. His fund was not labelled as growth, value or mid-cap. It was a capitalappreciation fund. So, while imitating him, do so in principle and cover all the points that he mentions. If hardand-fast rules are developed with focus on select numbers, then it will be a problem."

To explain, he says that inflation and interest rates in the US when Lynch was fund manager were different from what we have in India at present. In the US, a mature company, according to Lynch, grew at 2-3% a year, close to the inflation rate. In India, the long-term inflation is close to 5-7%, requiring an adjustment of the rate at which a slow-growing company should expand. 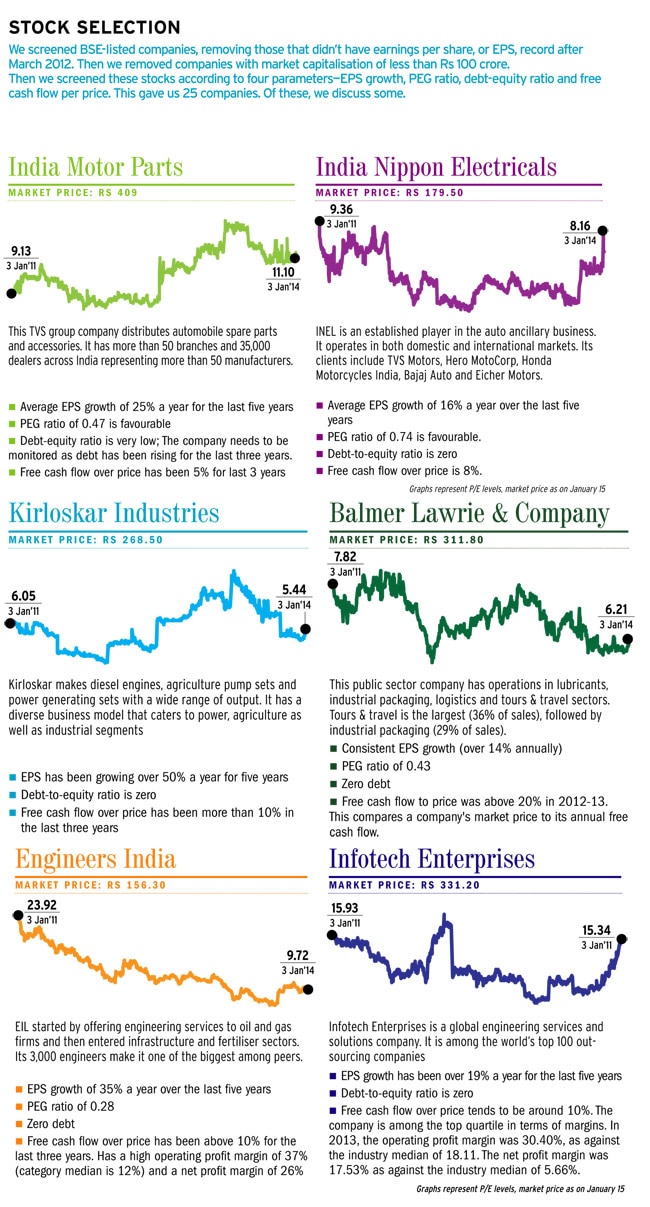 THE PHILOSOPHY
Lynch is at his best while giving pointers on how to research a company, plus what should be looked at and what ignored. He also explains how one must classify a company based on market capitalisation and the business's life cycle.

Most important, he advises investors to stick to their field of competency, something that is also advocated by legendary investor Warren Buffett. Lynch's argument is that a doctor will always know more about medicines and hence will be in a better position to judge pharmaceutical companies than a civil engineer. Similarly, a salesperson with an automobile company will understand his company and competitors better than others and will know if sales are rising and falling before stock analysts do.

The first category is 'slow growers'. These are large companies that have been in existence for long and are expected to grow slightly faster than the country's gross national product. The most important characteristic of slow growers is that they pay regular and generous dividends. They must be included in the portfolio as a dividend cheque is always good.

The second category is 'stalwarts'. These, too, are large, but haven't lost all the steam. Here, Lynch favours a clear strategy-investors should buy for a 30-50% gain. These companies are not meant to be held forever and should be included in the portfolio as they offer protection during recession and decent returns when market sentiment is positive. His favourite category is 'fast growers'. Lynch say they can generate the best returns, although he also warns that they face greater risk of extinction. These are new, small and aggressive enterprises that can grow at 20-25% per year. Explaining this category, he says, "This has nothing to do with the industry. There can be a fast-growing company in a slow-growing industry as well." Another risk of buying the stock of such a company is the steep price fall when they falter.

According to Lynch, the trick is to figure out when they will start slowing and what is the correct price for purchase. The third category is 'cyclicals'. Entities in this group, which includes automobile, airline, tyre, steel and chemical companies, see a rise and fall in sales and profits in a regular, if not predictable, fashion. While coming out of recession, cyclicals tend to flourish. But investors may suffer huge losses if they buy a cyclical stock at the wrong point of the cycle. Even though it is said that you should not time the market, in case of cyclical companies, timing is everything. 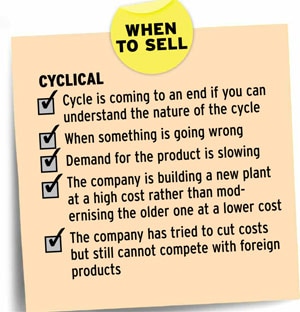 The other two categories are companies in special situations-turnarounds and asset plays. Turnarounds are companies that were on the verge of bankruptcy but have been revived. This could be because the government bailed them out or another company made a strategic investment in them. The best example of such a company is Satyam. Asset plays are unique in that they are either dying or are so old that their real estate has been written off their books. However, they have a lot of cash and negligible debt. The tough part is assessing the assets and finding out if the management will allow their liquidation. This requires understanding and patience.

Once a company has been categorised, Lynch says, it's time to understand the business and reasons for investing in it. For this, he recommends that investors use the product of the company and list reasons it has the potential to beat competition. Though it sounds simple, it is not. But his cardinal rule is-stay away from the hottest stock in the hottest industry, the one that gets the most favourable publicity. This simple rule can save investors from the crash that invariably follows market euphoria. "If you are not clever in selling the hottest stocks, then you'll soon see your profits turn into losses, because when the price falls, it's not going to fall slowly, nor is it likely to stop at the level where you jumped on," he says.

Lynch's another suggestion is to stay away from a company that diversifies into an unrelated business. Lynch calls this 'diworsefication'. He says investors should re-evaluate such companies. Perhaps it's best to book profit in them. He also says that one should invest in stocks only the amount that one can afford to lose as stock markets can be irrational. He also says that one should invest for the long term (5-10 years or more). He is against leverage and desists from speculation.

Lynch also suggests that before buying a stock, an investor should also check the price to equity, or PE, ratio for the last few years to get a sense of its normal level. If the company's PE is high, one must also check the PE growth rate ('PEG'). Lynch is credited with using this figure to check if a company is worth looking at. He used to divide the PE of the stock by the growth rate and reach the price-toearnings ratio to growth (PEG) figure.

Bakshi explains this with an example from the dotcom boom. "People used PEG to justify overvalued stocks they wanted to own because they could see other people get rich (even temporarily) and did not want to be left out." Click here to Enlarge
"That time many companies were growing at a torrid pace as they had started from a low base. So, people said that if they pay 100 times earnings when growth rates are 200%, the PEG ratio is only 0.5. Of course they got killed because that kind of growth was not sustainable," says Bakshi.

"The PEG ratio is an attempt (and a fairly crude one) to incorporate growth into a multiple and there is no US versus Indian quantitative standards. All markets are governed by the same first principles and your quantitative measures should not vary across markets," says Damodaran of Stern School of Business.

"One should be careful while using Lynch's principles. A company growing at 20% year-on-year and whose PE ratio is 20 will have a PEG ratio of 1. Now, another company with 5% growth and a PE ratio of five will also have a PEG ratio of 1. But they are not the same," says Vikas V Gupta, fund manager, Alpha L50 (India), Arthveda Fund Management Pvt Ltd. Lynch also recommends that investors should look at the market index to determine if it is a good time to invest.

After investing, regular monitoring, at least once in six months, is a must. "Owning stock is like having children. Don't get involved with more than you can handle."