Companies in automobile, metals, infrastructure, and real estate sectors remained under pressure in the first quarter. But private sector banks, and companies in IT, pharmaceutical and FMCG sectors put up a good show.

Tanvi Varma / Money Today
The verdict is out. Most of India Inc, which has declared its first-quarter results, is under stress. The numbers, which are better-than-expected on a yearly basis, disappoint if one compares them with figures in the previous quarter.

However, sequentially, that is, compared to the previous quarter, revenues, operating profits and net profits have all fallen.

Earnings were hit by high input costs and borrowings at high interest rates. To make things worse, rupee fall increased the cost of imports for a number of companies.

We analyse the key disappointments and surprises.

Automobile sector:
Sales of twowheelers and commercial vehicles fell due to the general economic slowdown . Also, people bought fewer petrol cars due to high prices of the fuel vis-a-vis diesel.

Rikesh Parikh, vice president, Equities, Motilal Oswal Securities, says these factors are reflected in the performance of Bajaj Auto, whose sales grew just 5 per cent, while profit after tax, or PAT, fell 6 per cent quarter-on-quarter or QoQ.

22% is the fall in Ashok Leyland's net profit in quarter ended June 2012 as against the same quarter a year ago.

Another reason is falling sales in the high-margin three-wheeler business, where exports declined 41 per cent YoY and 22.8 per cent QoQ. Domestic volumes were flat YoY and fell marginally by 1 per cent on a QoQ basis.

Ashok Leyland's sales fell 30 per cent on a quarterly basis due to lower demand for commercial vehicles (35 per cent fall QoQ). With demand slowing, chances of margin expansion were limited.

Banks:
Dipen Shah, head, Private Client Group Research, Kotak Securities, says PSU banks and capital goods/infrastructure companies have reported worse - than -expected numbers. In fact, a number of PSU banks showed an increase in stress on balance sheets. For instance, Union Bank of India (UBI) reported a 20 per cent rise in gross non-performing assets (NPAs). Its net interest margin, or NIM, fell by 25 basis points. NIM is the difference between the interest income earned by a financial institution and the amount of interest it has paid to lenders.

71% is the rise in Bank of India's net profit in the quarter ended June 2012 as against the same quarter a year ago.

After surprising in the last quarter of 2011-12 with robust PAT growth, UBI shocked the market in the first quarter of this year by a significant deterioration in asset quality and 2.2 per cent contraction in loan book QoQ. Its stock fell 7 per cent the day the results were announced.

Shah says any further delay in fiscal reforms will put sectors such as power and textiles under stress. This will be a negative for PSU banks as they have huge exposure to these two sectors.

However, the big private sector banks, Axis Bank, ICICI Bank and HDFC Bank, grew at a good pace. ICICI led PAT growth with a 36 per cent rise YoY. The bank, which had to shrunk its loan book for a few quarters to keep bad loans under control, reduced gross NPAs to 3.54 per cent from 4.36 per cent in the year-ago quarter. Private banks are expected to do well in the coming quarters due to fewer asset-quality concerns.

Infrastructure:
Infrastructure is among the sectors that have been hit badly by the current macroeconomic scenario.

According to Parikh of Motilal Oswal Securities, excluding L&T, BHEL and Siemens, most companies have been hit by high interest rates and fall in orders. 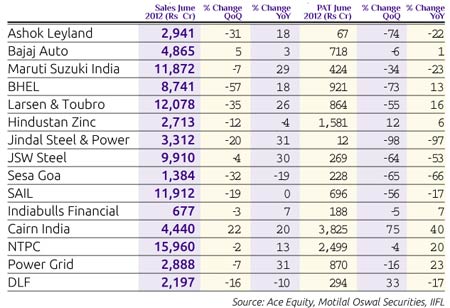 Capital goods companies saw moderation in revenue growth, led by slowdown in order inflows, especially from the power segment. Slowing industrial growth, which has averaged 1.9 per cent over the past six months, and lack of government approvals took a toll.

In real estate, there is a clear slowdown with companies selling land and other assets to pay off debts. DLF, for instance, saw sales drop by 10 per cent on a YoY basis. In the last five quarters, DLF has sold assets worth Rs 2,140 crore. Still, its gross debt has risen by Rs 1,150 crore during the period.

However, cement has been the top performer with ACC and Ambuja Cements reporting 24 per cent and 35 per cent PAT growth, respectively, mainly driven by higher margins.

Metals:
In spite of falling metal prices, sales rose on a YoY basis on the back of rupee depreciation. The demand outlook is uncertain due to moderating automobile sales and uncertainties in the construction sector.

Big steel producers such as SAIL and Tata Steel are battling inventory build-up and competition from imports. Brighter Side: Private sector banks and companies in IT, pharmaceutical and fast moving consumer goods sectors put up a good show
Further, a fall in prices of oil, especially palm oil, lowered input costs for companies like HUL. In fact, HUL's core soaps and detergents segment, which contributes 50 per cent to revenue and 40 per cent to earnings before interest and tax, outperformed the industry by registering 23.7 per cent YoY growth. Overall results show a 28 per cent rise in profit on a YoY basis complemented by a 14 per cent rise in sales.

Pharmaceutical companies gained from rupee fall, new launches on the back of the huge number of drugs going off-patent in the US and strong growth in the domestic market. Companies like Cipla (21 per cent PAT growth YoY) and Divi's Labs (60 per cent growth) benefited from the rupee fall as they export a big part of their production.

Another notable sector that has performed well is airlines. "Aviation companies benefited from an improvement in the pricing environment. Also, Kingfisher's loss of market share was capitalised by players such as Jet and Spicejet," says Khattar of Edelweiss.

Parikh of Motilal Oswal Securities says PAT growth for the current quarter was led by technology (35 per cent growth YoY), followed by private banks (30 per cent). In fact, the three highest growth Nifty companies according to YoY change in PAT are HCL Tech (71 per cent), Cairn India (40 per cent) and TCS (38 per cent). HCL saw 13.5 per cent QoQ revenue growth, driven by a 4.6 per cent increase in volumes. The margins rose by 3.5 per cent QoQ, driven by currency and productivity gains. In fact, the company has been able to report growth across most verticals and geographies in a tough environment.

Similarly, TCS delivered 12 per cent growth in net sales owing to a good performance in Europe. The three companies that have reported a fall in PAT are Maruti (-23 per cent), Reliance Industries (-21 per cent) and Grasim (-13 per cent).

According to the Centre For Monitoring Indian Economy, the net profit of corporate India could grow a robust 24.5 per cent in 2012-13, after falling 0.6 per cent in 2011-12, due to softening of commodity prices and steady interest rates. It says companies may not be hit as much by foreign exchange losses as they were last year as the rupee has already fallen quite steeply and so may remain stable.

According to Shah of Kotak, over the next few quarters, the performance of corporate India will depend on reform initiatives taken by the governments, both local and global. Domestic reforms will improve order inflows for several companies and support consumption.

Global economy is under stress and that may continue to impact export-oriented companies unless some stimulus measures are taken.

"Crude oil prices have risen again and may impact costs while interest rates continue to be high and will again put pressure on profits," says Shah. Further, interest rate-sensitive sectors will most likely react positively only if there is a cut in rates by the Reserve Bank of India, due to which they may remain rangebound in the near term.