Tips for safer investment when a company is delisting

Do you rush to buy a stock at the hint of a firm's delisting plans? While this offers scope for making easy money, a wrong move can lead to pain.

Did you ever get a call from your broker suggesting you buy a stock because the company is likely to delist and you can make short-term gains as it reacts to the delisting talk?

Investors are often lured by such gains, especially the rise in share prices on reports of delisting plans. Stocks do react to delisting announcements, even rumours.

Take the most recent case of UTV Software Communications. As the buzz of a possible delisting move started doing the rounds, with news reports appearing in early June, the stock started inching up.

It rose about 30% from Rs 665 on June 3, 2010, to Rs 950 on July 26, when The Walt Disney Company's formally announced its plan to delist at Rs 1,000 per share. However, in keeping with corporate norms, the company initially denied any such development.

Interestingly, the share price of the company had taken major strides from the turn of the calendar year itself. The share was trading at Rs 553 on December 31, 2010.

But what is delisting? As is evident from the term, it means a listed company removing its shares from trading on a stock exchange.

Companies generally delist when they want to expand or restructure, are acquired by others, or the promoters wants to raise their stake. Delisting can be a voluntary decision where a company pays investors and removes its securities from the exchange or a forced delisting by stock exchanges for non-compliance with their rules.

Here, we are discussing companies which delist voluntarily. Forced delisting by exchanges leaves investors in the lurch as they have no option but to sell at whatever price is decided, which may be less than the actual value of the company. 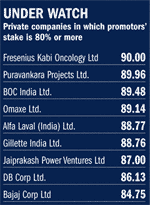 Private companies in which promoters' stake is 80 per cent or more
Click here to Enlarge
To voluntarily delist, a company normally offers shareholders a premium to the price at which the shares are being traded on the exchange. When an investor sells to a promoter wishing to delist, the transaction is off the exchange.

Since July 2010, when the government made it compulsory for listed companies to increase public shareholding to a minimum of 25% - to be done over three years by selling a minimum of 5% every year - the hunt for companies likely to delist has gained momentum.

Public shareholding means shares held by anybody other than the promoters, persons acting in concert with the promoters or an acquirer company. When this regulation came into force, investors started looking for companies with promoter holding in the range of 80-90%, anticipating they would delist.

On UTV Software, experts believe there are chances the open offer will be revised. "Looking at the shareholding pattern, it seems the delisting offer price of Rs 1000 may be revised," said Jagannadham Thunughuntla, head of research, SMC Capital.

Nisha Shah, associate director at Motilal Oswal Investment Banking, agrees. "It is a bit difficult for the company to get delisted at Rs 1,000, since it is currently trading at Rs 900-odd levels." The stock rose 5.4% to Rs 950 on July 26, the day the board announced the delisting.

"The company does not set the eventual delisting price. It is the investor who sets it. While investors can quote the price they want, the acquirer has the freedom to accept or reject it. It's a high-risk game at the end of the day. Investors start speculating what price the acquirer will be finally willing to accept," said Sourav Mallik, senior executive director, Kotak Investment Banking.

While the Securities & Exchange Board of India lays down the criteria for fixing the minimum price below which the promoter cannot buy, it is silent on the maximum price. According to Sebi, the floor price should be the average of weekly closing highs and lows of 26 weeks or of the last two weeks, whichever is higher.

The pricing tussle also results from the regulatory requirement that any company seeking to delist should buy back more than 90% of its total shares, failing which it cannot go ahead. For buying this much stake, a company has to negotiate with all investors to decide a price they are willing to accept.

Be warned that the stocks may crash if the delisting plans don't fructify. "If Walt Disney is not able to buy 90% outstanding shares, the plan will fail and there is a good chance that the stock will collapse," said SMC's Thunughutla.

Walt Disney Company holds 50.44% in the company, while 19% outstanding shares are held by other promoters. About 12% are with institutional investors and the rest are held by corporate and individual shareholders.

To understand this better, let's examine the case of Suashish Diamonds which failed to delist as the promoter rejected the price sought by investors. On October 5, 2009, the company announced that its board was planning to meet to take a decision on delisting. The same day, the company's shares rose 20% to Rs 252 on BSE.

In the next ten days, the shares rose 88%, even hitting an intra-day high of Rs 395 on October 12. The company took the board's approval, followed by the approval of the shareholders by way of postal ballot. On March 29, 2010, it announced its offer price of Rs 220, which was at a substantial discount to the market price of Rs 293. On May 24, the promoter raised the offer price from Rs 220 to Rs 320.

Finally, on September 22, 2010, when the promoters withdrew the delisting offer, the share was trading at Rs 171.

While the level of promoter shareholding is one of the criteria for finding a potential delisting candidate, the ability of a company to pay is also important. "Generally, MNCs are more likely to consider delisting. A company whose parent company is not listed on a stock exchange outside India may choose to delist because it is not used to working in a listed environment. Companies who want to grow and need capital might also delist," says Kotak's Mallik.

"One needs to study a range of qualitative and quantitative factors to understand whether an India-listed MNC is planning to delist. One must assess the financial health of its parent company, the valuation of shares in India vis--vis the home country, the company's outlook on India, the shareholding pattern and intellectual property rights aspects, to name a few. It is a complex process," says Kotak's Mallik.

Should you buy a delisting candidate? Market experts advise caution. "Any prudent retail investor should not look at delisting as a reason for investment. However, one should do regular stock-picking with focus on fundamentals. If the company announces delisting, one will end up being lucky, as the investor will not tender shares unless the deal is good," says Jyothi Prasad, head of investment banking at Asit C Mehta Investment Intermediates.

On UTV Software, Nisha Shah of Motilal Oswal Investment Banking says one should look at the company's long-term prospects. "UTV Software is a good company for the long term, but I would not recommend buying it purely for delisting."

Last but not the least, if the company is successful in buying over 90% shares, it can delist and will not be available for trading. In that case, if an investor has not tendered the shares, he or she might end up holding non-tradable securities. The only resort in such a case is to either write to the company for buying back the shares or sell to a firm which trades in non-tradable securities.

However, there is one more option minority shareholders can resort to in case they don't like the buyback price. They can move court, as in the Cadbury case.

In early 2003, chocolate-maker Cadbury delisted, offering Rs 500 to shareholders. The company managed to buy over 90% shares, the minimum required for delisting. The 8,149 minority shareholders, holding about 2.4% equity, rejected the price and moved court.