Stocks of companies recasting debt can give stellar returns

Experts say, in the near term, investors are not likely to get anything out of the company going for debt recast. However, if they have a longer holding period of, say, three to five years, some companies can reward investors handsomely after restructuring.

Tanvi Varma / Money Today
Debt is one of the many ways that companies use to access capital. It is also a burden that can push them into insolvency. To prevent bankruptcies, in 2001, the Reserve Bank of India came up with Corporate Debt Restructuring (CDR), a mechanism that companies unable to pay off debts can use to stay solvent, restructure, and, finally, revive.

The mechanism is run by the country's financial institutions, including banks, to ensure timely and transparent restructuring of debts of companies that are viable but facing temporary difficulties. Its aim is to "minimise losses to creditors and other stakeholders (of companies) through an orderly and coordinated restructuring programme."

THINGS THAT WENT WRONG
The main reason for such a sharp rise in CDR cases is the slowdown after 2008 that reduced margins while huge expansion in the years before the crisis made companies pile up debt, says Ashutosh Maheshwari, chief executive, Motilal Oswal Investment Advisors Pvt Ltd.

The iron and steel sector accounted for the most number of cases, involving a debt of Rs 53,000 crore, followed by infrastructure, power, textiles and construction.

Asset-heavy businesses such as iron & steel need huge capital, and, by extension, debt, which is fine when things are good but may become a burden during periods of slowdown and high interest rates. This explains the presence of such a large number of iron & steel companies in the CDR list, besides infrastructure companies, which are facing stress due to high debt and interest rates and delays in clearances and land acquisition.

CDR TO THE RESCUE
The CDR mechanism can be used by companies under debt of more than Rs 10 crore from more than one lender. The lead lender, if it fears that the company will not be able to service the loan under existing terms and conditions, can approach the CDR cell.

After this, the company and its lenders work out a deal which involves one or more of these things-increase in the loan tenure, cut in the interest rate, one-time settlement or conversion of the debt into equity.

"This benefits companies by giving them one to two years to generate cash that they can use to grow instead of servicing their debts," says Maheshwari.

For lenders, this keeps the loan from slipping into the non-performing asset, or NPA, category, which leads to higher provisioning and, thus, losses. A loan that is being recast falls into the restructured category and invites a lower provisioning of 5% (NPAs attract 100% provisioning). Provisioning means setting aside funds for bad loans.

Further, public sector banks have been far more amenable to loan restructuring than the private sector ones. For instance, Chennai-based Indian Overseas Bank has the most restructured assets (9.7% of total), followed by Central Bank of India (8.39%). In comparison, restructured assets of ICICI Bank, HDFC Bank and Axis Bank are below 2%. 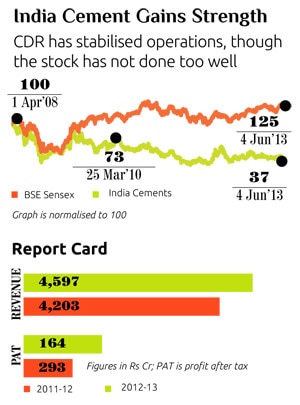 If you own shares of a company that is undergoing debt restructuring, the first thing you must ask is whether the problem is cyclical or industry-related or the company has fundamental issues.

Saraf of ICICI Securities says debt recast is most effective when the downturn in the company's fortunes is largely due to cyclical and industry-related factors. In such a case, the company essentially needs breathing space, for instance, moratorium on payment of principal and funds to pay pressing creditors, but is viable in the long term.

Usually, companies approach the CDR cell when their cash flow is not adequate to pay debtors in the medium term (one to three years) but can survive in the long term. But the question is: Does it make sense to invest in a company that is facing such a problem?

"In the near term, investors are not likely to get anything out of the company. However, if they have a longer holding period of, say, three to five years, some companies can reward investors handsomely after restructuring," says Maheshwari.

But this works only as long as the company's fundamentals are strong and it is not facing other issues.

Take Suzlon. The company has gone for debt restructuring but is facing a lot of issues it is finding difficult to resolve. It is unable to ramp up and has been hit by falling demand and tough competition.

On the other hand, Wockhardt, which underwent CDR, did not have structural issues but came close to bankruptcy due to losses from derivatives during the financial crisis of 2008 which affected its cash flow. Monetising of non-core assets and improvement in profitability helped the company exit the CDR mechanism. Due to this, the stock has returned 34% a year since April 2008.

However, not everything goes according to the plot. "Kingfisher Airlines is an example of a company in the CDR mechanism that has defaulted on its conditions," says Saraf. The company escaped collapse by converting a Rs 1,300-crore loan into preference shares, moratorium on repayment of balance loans, and reduction in the interest rate by 300 basis points. However, there is no turnaround in sight, and the lenders are pressing for recovery of loans by selling the company's mortgaged assets.

If Kingfisher was incorporated in the US, it would have been subjected to restructuring under Chapter 11 of US bankrupcy laws long ago. Chapter 11 is a form of bankruptcy that involves reorganisation of a debtor's business affairs and assets. It is generally filed by companies which need time to restructure their debts.

"Carriers such as Delta Air Lines Inc used bankruptcy protection to restructure their loans and shed costly pension and retirement benefit plans in the years after the 2001 terrorist attacks," says Gupta of Anand Rathi. Chapter 11 permits re-organisation. There is no similar comprehensive bankruptcy framework in India. "The legal meaning of bankruptcy, insolvency, liquidation and dissolution is itself contested in the Indian legal system," he says. 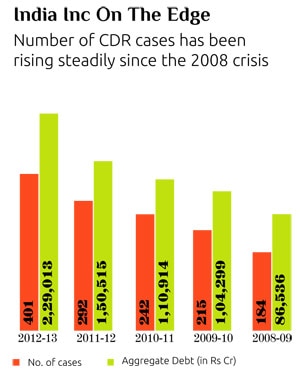 A 1985 law, the Sick Industrial Companies (Special Provisions) Act, provides insolvency protection through the Board for Industrial and Financial Reconstruction, but only to manufacturing companies that are more than five years old and whose losses are equal to or more than their net worth. Service providers such as airlines and information technology companies are outside its ambit. It was in 2001 that the RBI came up with the CDR idea as an alternative to the BIFR process.

WATCH OUT
If you have bought shares of a company that has had to go for debt recast, you must look for factors that might make the company susceptible to financial stress. These could include stretched working capital cycle, decline in profitability and increase in leverage.

"Some good indicators are a high debtequity ratio (generally more than 3:1 for infrastructure and more than 2:1 for other companies), a low debt service coverage ratio (1.50 and above), a declining interest service coverage ratio (below two indicates low capacity to service debt), a sharp decline in operating profit margins over several quarters/years, and an increasing working capital requirement accompanied by stagnant sales, turnover and profit margins," says Gupta.