Tips for investing in bonus issues on stock markets

A bonus issue is usually good for the stock. But one must look at the fundamentals before investing.

A bonus is always welcome. So, it seems, is a bonus share issue. Giving bonus shares is one of the ways companies reward investors without disturbing their cash balances. Sanjiv Bajaj, MD, Bajaj Capital, says, "One way of rewarding shareholders is to give dividend. Another is by giving bonus shares and capitalising reserves."

Does a bonus issue benefits investors? Data analysed by Money Today over a 10-year period shows that in most cases, the stock price of a company rises after a bonus issue. Our analysis is split into two parts - first, the movement in share price from the time the issue is announced till the record date, and second, one year after the record date.

What You Get
Bonus shares are shares given to existing stockholders in proportion to the number of shares they hold. A 1:1 bonus means that a shareholder will get one share for each share held by him. For example, if someone is holding 10 shares, he will get 10 more. The shareholders do not pay anything for these shares.

MUST READ: How to get higher returns from stock trading

To give bonus shares to investors, a company builds a reserve by retaining a part of its profit over the years (the part that is not paid as dividend). When these free reserves increase, the company transfers a part of the money into the capital account, from which it issues bonus shares. Only fully paid-up shares are eligible for bonus.

"The purpose of issuing bonus shares is to increase liquidity in the stock and hand out the available distributable net worth in a cash-neutral manner," says Sudip Bandyopadhyay, managing director and chief executive officer, Destimoney Securities.

Price Adjustment
Usually, after the bonus issue, the share price of the company gets adjusted according to the bonus ratio. For example, if the price before bonus is Rs 200 and a company issues bonus shares in the ratio of 1:1, the post-bonus share price will be Rs 100, which means that the total market value (2 x Rs 100=Rs 200) remains the same.

Impact on Price
Our analysis also shows that there is high chance a stock will rise after the record date. However, experts have mixed views on this.

MUST READ: What to do when a stock delists

Mehul Ashar, president-head, wealth management, Inventure Growth and Securities, says, "A bonus issue is generally perceived to be positive by investors and creates more demand for the stock. If in the following year, the company increa-ses its earning and maintains the earning per share (EPS) at levels estimated by the management, the stock will give good returns." After the bonus issue, the number of shares outstanding (as per the ratio) increases, and the EPS falls by the same extent. 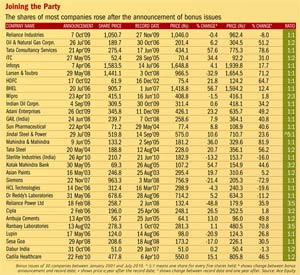 Like stock split, the most common reason for issuing bonus shares is that the share price has become high and is affecting demand.

Kaushik Dani, head-equity, Peerless MF, says, "A company issues bonus shares when it has bright prospects and thus does not mind diluting capital. It increases liquidity and retail participation."

Alex Mathews, research head, Geojit BNP Paribas Financial Services, says, "The announcement of bonus shares has no affect on share price. After the announcement, the stock can move in either direction depending on the market sentiment."

Pankaj Pandey, head of research at ICICI Direct, agrees. "Market sentiments give direction to stocks. However, bonus shares help increase liquidity in the stock," he says.

39: Number of companies which announced bonus issues between January and October 2011

THINGS YOU NEED TO KNOW
1. Ex Bonus: It means after the record date. It is the date on which the share price is adjusted on stock exchanges according to the bonus ratio

2. Record Date: The cut-off date fixed by a company to determine who is eligible to get bonus shares. You get the benefit only if you have shares in your demat account on this date

Should You Buy?
If you want to buy shares of companies which are going to announce bonus issues, hold on. One should not buy purely on the basis of expected bonus shares unless one is certain about the fundamentals of the company.

Rajesh Jain, executive vice president and head of retail research, Religare Securities, says, "A bonus issue is a sign the company is expanding equity and increasing liquidity, but it is not the only indicator of performance. Investors should take a decision after analysing the fundamentals of the company."

Kaushik Dani of Peerless MF agrees and says, "Bonus shares lead to adjustment in the share price according to the proportion of dilution. So, the price comes down in the immediate term. However, in the long run, the share price depends on the fundamentals and growth prospects of the company."