As the telecom giant transforms itself from a devices company to one that provides complete mobile solutions, its top management learns vital lessons through "reverse mentoring". 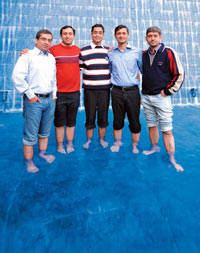 When Jasmeet Gandhi, 42, is not customising services or business models for the Indian market, he is in the company of the managing director and other members of the board. But he isn't there listening to lectures or getting pulled up over targets. Instead, he's helping Nokia India's brass look into the future through his eyes and ears. Gandhi is part of a band of "gurus", junior employees all, that decodes cutting edge technology, social organisation, competition and roadmap. Each guru is a domain expert.

Says D. Shivakumar, VP and MD, Nokia India: "Our industry changes every day. What this industry did two years ago has nothing to do with what it is doing today. The first thing (needed) to succeed in telecom is renewal— personal renewal and organisational renewal." While organisational renewal is a different story, Gandhi and other tech gurus have been helping with the personal renewal of the top leaders for the past five or six months. Some gurus, like Gandhi, who was working with Rediff, were hired 15 months ago, with reverse mentoring in mind.

At the centre of this rush for renewal is the fastchanging face of the telecom industry. When Nokia India was building its organisation in 2005, it went talent hunting in areas like branding, distribution and marketing. Nokia was then a handset maker and so had to follow the consumer durables game. Two years ago, the company decided to start on a transformation journey, from devices to solutions. "That market is huge for us. (The) global market for applications is $1 billion (Rs 4,600 crore)… this will reach $4 billion (Rs 18,400 crore) in 2012," says Shivakumar.

The Nokia brass then realised that top-down coaching and leadership had been fine in the first phase; in the second, they would have to be the learners. Earlier, the senior management was the repository of knowledge. Now the centre of gravity of experience and learning has moved down, to the select few who know more about applications and who can do a hawk-eyed scrutiny of competition the world over. The company identified eight or nine candidates six months ago to coach and handhold their seniors in services, technology and applications at mentoring sessions, the idea for which came at a board meeting. "The idea cannot be attributed to one individual, the board… found value in it," says Bimal Rath, Head, HR, at Nokia.

Reverse mentoring is based on who understands a particular solution the best. The gurus at Nokia are not geeks in the strictest sense; they are all sales and marketing people. But part of their routine is trawling the net—the music applications expert keeps an eye on what's the latest across the globe, how relevant that is for India and keeps the leadership posted. The basic premise is that a consumer will buy Nokia products not for the hardware but what he can do with it. Nokia business leaders are mastering this art.

The mentoring sessions are formal: the one-on-one sessions that take place typically last one to two hours. Learning continues informally too. Says Rath: "It's very formal, face-to-face and then you learn by practising what they teach."

Rath himself has acquired a new skill. He can rattle off information on seeds, fertilisers, pesticides, market prices, and weather. That's because his mentor, Navdeep Manaktala, 38, Head of Services and Sales, taught him the minute details of Nokia Life Tools, a range of services including agriculture, education and entertainment services designed specially for the consumers in small towns and rural areas of the emerging markets. "I knew that something like this existed, but now I have become the evangelist," Rath says.

Shivakumar recalls that when Gandhi was taking him through the applications, it was about the industry, technology, top applications, free or paid-for. At one such session, the strategy expert in him did some mental math and realised that the market needed 150-200 applications from Nokia per annum. "I can bring some strategic framework to the thinking, but he gives me all the fodder," Shivakumar says.

V. Ramnath, Director, Operator Channel, Nokia India, is a music buff, so he was more than eager to go through a mentoring session on music. Music Store was not new for him, but the sessions made it easier for Ramnath to understand and find the right solution.

Nokia is working on search optimisation of Music Store thanks to Ramnath's mentoring session with Gautam Dhingra, 32, Solution Manager, Operator Channel. Nokia used to launch a service and optimise it later. At a mentoring session, Dhingra explained why it would be better to optimise before a launch. "After the mentoring session, I realised his point," says Ramnath.

Something similar happened with Nokia Life Tools for farmers. The application allows farmers to choose three crops about which they need information. Earlier, a first-time user would be prompted after three crops that he is not allowed information on more than three. The mentoring sessions led to a change: now, the application tells the farmer right at the start that he gets to choose at most three crops.

Nikhil Mathur, 42, who heads strategy at Nokia, has to ensure that Nokia India is on track meeting strategic agendas and goals. The finance wizard is a gadget freak, so understanding the technology was the least of his concerns. When he sat in a session with Manaktala, he wanted to understand the services, warts and all, their benchmark against competition and what it would take to go to the next level.

Beyond learning, reverse mentoring is throwing up young ideas. "Some of the youngsters have great ideas. Now the leadership team knows what youngsters are thinking. The younger generation also knows where the company is going in terms of direction. They start to take a lot of ownership," says Rath.

It's providing a lot of bonding between the leadership and the next generation. The framework was by design and the results were by default, says Rath.