This case study looks at how Spotify evolved its use of marketing tools in keeping with the evolution of the music industry, as well as changes in the way companies and customers now communicate with one another.
Raoul Bostrom, Kieran Byrne, Bidisha Chakraborty, Juan Luis Ugarteand Skee Yagi | Print Edition: Nov 24, 2013 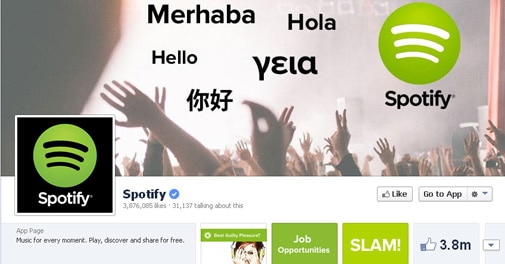 Executive Summary:  Spotify is a rising technology venture which, since its public launch in 2008, has disrupted the way music is distributed. It allows users to listen to music online and share playlists with friends. It also provides an offline service. What differentiates Spotify is not just its product but also its social media marketing strategy. This case study looks at how Spotify evolved its use of marketing tools in keeping with the evolution of the music industry, as well as changes in the way companies and customers now communicate with one another.

The Internet has been disrupting and revolutionising the global music industry all through the past two decades, The traditional pre-recorded forms of music distribution have been heavily substituted by illegal file sharing, downloadable tracks and, more recently, cloud-based streaming. These changes have significantly reduced the music industry's revenues, which in turn has forced industry players to drastically rethink their strategies and come up with a mass of innovative business models.

The revolution began with the development of the .mp3 format in the mid-1990s. It provided a means to store audio in a compressed format that was far smaller than uncompressed audio. With the relatively small hard drives of the time, this enabled people to store their music collection on their personal computers, and create their own compact discs of mixed compilations.

The natural progression from the.mp3 was the development of Internet-based file sharing platforms. Beginning with Napster, launched in 1999, many large-scale file sharing applications proliferated, all designed to help the illegal sharing of .mp3 files. They cannibalised sales in the traditional music distribution platforms. Many artists and record labels filed lawsuits against the offending companies, and also against individual users exploiting the platforms. Although some progress was made in curbing the use of these sites, there are still today an estimated 16 million Americans who download pirated music. 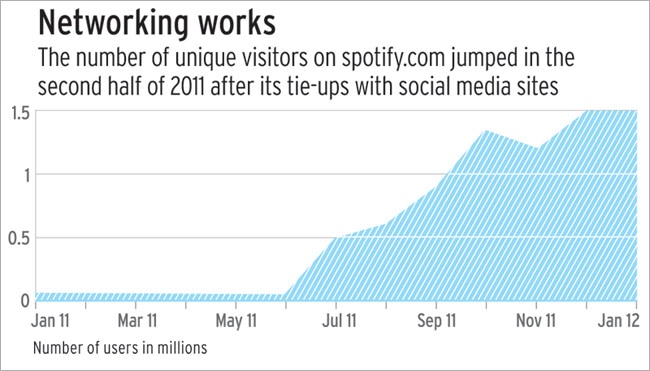 One of the first companies to try to legitimise downloading of individual tracks was Apple, which opened its iTunes music store in 2002 to complement its iPod device. The store was an immediate success, with more than five million songs downloaded in the first two months.

This provided an attractive proposition to consumers as they could legally obtain access to preferred songs with no need to buy an entire album. The rapid rise in broadband speed and penetration in recent years has opened up the possibility of cloud computing, which allows access to files without the need for local storage.

Access to the cloud has spawned a number of start-ups such as Spotify and Grooveshark. These providers allow access to an almost endless database of music to users, which can be pushed to computers and other devices connected to the Internet.

These sites have a range of revenue models which tend to revolve around subscription services and advertising while a user listens, which enables them to pay royalties to artists. But this continues to be criticised as the royalties paid are said to be miniscule. For instance, Spotify reportedly paid Lady Gaga only $167 for one million streams of her single Poker Face.

Development of the Spotify technology began in 2006 at Spotify AB, the founding company based in Stockholm, Sweden. In October 2008, the founding team launched the technology for public access, launching the paid subscription model at the same time. The initial public access was by invitation only. The company also announced licensing deals with a number of major record labels at the time.

The parent company moved from Stockholm to London, and is now called Spotify Ltd. The development and research work is still undertaken in Sweden. By September 2010, Spotify had about 10 million users. Its growing popularity highlighted the need for further investment in research and development.

Spotify received $21.6 million in its first round of funding in 2008, prior to the launch of the public access service. The first round was funded by Creandum Northzone Ventures, a technology-focused Nordic venture capital (VC) firm, and Li Ka-Shing, an angel investor and the 11th richest man in the world as estimated by Forbes 2011. The second round of funding for $50 million came in 2009. Li took part again in this round, along with VC firm Wellington Partners.

Sean Parker and Founder's Fund, where Parker is a board member and one of six partners, participated in the third round of funding for $11.6 million in early 2010. The final funding round took place in 2011, for $100 million, between Accel Partners, Digital Sky Technologies, which funded Facebook and Groupon, and Kleiner Perkins Caufield and Byers, who were early investors in Amazon and Google. These funding rounds, along with the rapid user addition globally, meant the company was valued at $1 billion in June 2011.

In 2009, Spotify's founding team of CEO Daniel Ek and Martin Lorentzon expanded the company's board to include Frank Meehan from Horizon Ventures and Sean Parker, the serial entrepreneur linked to Facebook and Napster, among other social media start-ups. In 2011, Spotify added the position of Developer Community manager, hiring Andrew Mager, another serial entrepreneur and blogger with prominence in social media networks.

One reason Spotify has been adding users rapidly is its tie-ups with social media sites. An active Facebook account is needed to register, unless the user had a Spotify account prior to September 2011. With its Facebook page and Twitter stream, Spotify communicates with users the same way many firms use social media to promote their products and gain feedback. Beyond these established forms of social media marketing, Spotify has introduced several innovations. It has incorporated social media extensively into its product, relying heavily on Facebook in particular to enhance the user experience.

Spotify adopts a traditional approach to managing its own social media feeds. Says Andre Sehr Spotify's Head of Social Media: "[Facebook and Twitter] both provide us with a platform to promote new artists and albums, talk about great new Spotify features and get valuable feedback to improve our product." In addition, Spotify tries to drive social media users to its premium service by promoting on Facebook and Twitter before releases unique content and competitions that only premium Spotify users can access.

Spotify's Facebook page has 2.4 million "likes" and an average of one post per day, primarily about bands who played or visited Spotify offices, and curated playlists for bands performing at festivals and award shows that can be listened to via Spotify. On Twitter, Spotify's stream has 264,000 followers and an average of four to five tweets per day. There is a much higher level of engagement than on Facebook. On Twitter, Spotify answers users' questions, retweets music-related tweets by both regular and celebrity users such as Ashton Kutcher, and even sends users playlists made for them.

Spotify has used social media feeds to generate buzz among users. When Spotify launched in the US in 2011, it was by invitation only. As demand for Spotify in the US was high, following its success in Europe, it used scarce invitations as a carrot for social media users to hype up the launch. It also teamed up with Klout, a site that rates peoples' influence within Twitter, Facebook and LinkedIn, to provide 100,000 invites to US users. Klout users could get an invite if they had a high enough Klout score, ensuring Spotify reached users who were most likely to share thoughts through social media with communities that value their opinion.

Interest in securing Spotify invites was so high that the Klout website crashed due to user overload. Spotify has deeply integrated its service with Facebook. It has adapted its business model to ensure that this integration attracts users. Spotify and Facebook are now embedded in each others' platforms, enhancing the value of both. Music can be shared seamlessly between friends.

Ahead of the launch of its integration with Facebook, Spotify changed its core pricing model. Spotify had initially been adopted mostly by music fans who valued the ability to listen to a wide variety of music on demand. As usage of Spotify began to appear in Facebook users' news feeds, Spotify gained exposure to a much larger audience than would have previously been aware of the product. Previously, users with free, or ad-supported, accounts were restricted to 10 hours listening per month and five plays of any song. To attract new users and prevent any time or song limit issues when users clicked on songs appearing on Facebook news feeds, Spotify began to allow six months of unlimited listening on free accounts.

Spotify's innovations in social media are driven by the belief that music is social. Indeed, music has become truly social.

How bayt.com emerged as top job portal in West Asia