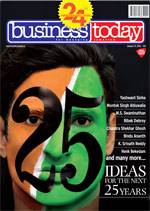 This refers to Business Today's 24th Anniversary Issue (January 17, 2016). First of all, kudos to BT for successfully completing 24 years in the turbulent media industry. It is a remarkable feat. The excellent suggestions by experts in the last edition have depicted innovative means to speed up the progress of the Indian economy. With abundant resources at our disposal and a vast talent pool, the policymakers must accelerate reforms and disinvestment, attract huge investments, bolster governance, ensure timely execution of the revamped plans, and make India a global economic and military giant along with the US and China. Many of the measures and weapons that are recommended by Admiral Arun Prakash (Retd.) in the defence policy arena are yet to be brought into our defence quiver. Keeping in mind the recent terrorist attack in Pathankot, the Centre has to take up these matters seriously on a war-footing for creating a conducive investment climate at the earliest. Also, BT's tie-up with Harvard Business Review and publication of lead articles in its issues is a significant journalistic service at an affordable price. It deserves mentioning as global practices are well illustrated, enhancing Indian managerial outlook and efficacy. May the unfolding years add to the feathers of glory in BT's crowded cap. I offer my best wishes for its majestic march into the future with flying colours. - B. Rajasekaran, Bangalore

It's Important to Make Ideas Happen

This refers to your 24th Anniversary Issue. Contributions from stalwarts and experts, suggesting innovative ideas, are indeed worthy of sharing with BT readers. But it is not enough to just have ideas, it is also important to make them happen. The value of an idea lies in using it. Nelson Mandela is often quoted as saying: "It always seems impossible until it is done." (And if we split this word it can read as: I M Possible.) Every new idea looks crazy at first. John S. Herrington had once said: "There are no dreams too large, no innovations unimaginable and no frontiers beyond our reach." So let's have a crack at them. Hope BT continues its long journey ahead for bringing out a Golden Jubilee Issue! - J.S. Broca, New Delhi

This refers to a piece by environmentalist and activist Sunita Narain (Air Pollution Is Slow Murder; Must be Stopped (January 17). The only solution for minimising pollution caused by vehicles is to ban sale and purchase of cars in metros and other big cities where the level of pollution is high. All other measures are a futile attempt. When the roads are not equipped to handle the growing number of cars in a city, how can their sale be allowed? There is logic in stopping the sale of motor vehicles. When shows are houseful, ticket sales are stopped. Same is the case for trains and flight tickets, so why not in the case of vehicles? The odd-even formula will not solve any pollution problem Delhiites are facing. So, the formula should be dropped. - Mahesh Kapasi, New Delhi