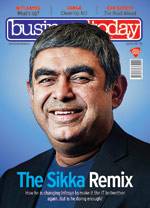 The Man at the Helm of Infosys

This refers to your cover story on Vishal Sikka of Infosys (Re-imagining Infosys, April 10). The man at the helm was among the top 50 CEOs in Glassdoor's annual Employees' Choice Awards for the Highest Rated CEOs in 2015. He is probably the right man to bring back Infosys into the high-growth mode, which was lagging behind on growth prospects for many years. No doubt, the company had lost its direction on many fronts. Employee morale had taken a hit and its conservative attitude added to the problems. But the million-dollar question is: Will the company revive its lost glory under the leadership of Sikka? Wait and watch! - Namita M., Faridabad

This refers to your article on NITI Aayog (Work in Progress, April 10). The dislodging of the Planning Commission demonstrates that political differences have destroyed established institutions in India. Numerous hurdles prevent the development of policy-making machinery. Instead of utilising the built-up strengths of Planning Commission and rectifying its accrued lacunae, it was dismantled. It was a bit like throwing the baby out with the bathwater.

The views expressed for its retention can hardly be repudiated in the face of slow formation of the team and tardy progress in functioning of the NITI Aayog. Economic development has obviously taken a beating due to its toothless framework. There may be some quality experts on the panel of NITI Aayog, but it will take a long time to get administrative acumen. The real issue is not lack of information but disinformation about its deliverables. NITI Aayog must be bestowed with authority and given functional significance to roll out dynamic plans and meaningful schemes to boost the economy and also ensure social welfare of the nation. - B. Rajasekaran, Bangalore

This refers to your online story on public sector banks (Consolidation of PSU Banks: Why government has a hard task on hand, April 10). Consolidation in the public sector banking (PSB) space has been extensively debated for a long time now, but without any concrete steps being initiated. For a sound, strong and vibrant banking system, the country will need to have fewer, stronger banks instead of a large number of smaller banks that have the potential to cause systemic risks. A beginning can be made by identifying large, medium, and small banks from amongst the PSBs existing now. Then, merge the identified small banks with their bigger cousins in such a manner that the merged entity gains geographical reach to acquire a pan-India presence and enjoy a host of other accompanying benefits. A market-driven merger would create a win-win situation for all concerned. Smaller banks have limited resources and a low risk-bearing appetite and hence will find it increasingly difficult to operate in the emerging scenario with greater uncertainties. Setting up of Banks' Board Bureau (BBB), now consisting of professionals, is most welcome in this context to lend more credibility to the banking system. BBB will have a huge task on hand especially when the banking industry is faced with a high degree of non-performing loans. How well it deals with critical issues, including cross-mergers of the PSBs, time alone will tell. - Srinivasan Umashankar, Nagpur

This refers to your feature on hospitality (Wooing the 'She' Guest!, April 10). It is sad that recently some cases of harassment to foreign tourists, especially women, were in the news in India, but otherwise, India is a tourists' paradise. Some stray cases cannot lead to the conclusion that India is a tourist's nightmare. The best spirit of bhaichara - brotherhood - is seen in India. Our country is known for its culture and heritage and is the best in the world. - Mahesh Kapasi, New Delhi