No fancy graphics, no storylines, only your creativity as an aid to build what you need. 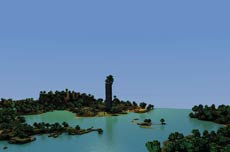 There's a new phenomenon taking over the gaming scene. It's called Minecraft, and it's like nothing you've seen before (unless you're one of the few who played its predecessor, Infiniminer). Minecraft is like Lego meets Robinson Crusoe meets McGyver. It's hard to describe this without making it seem like complete nonsense, but I'll try. You start off alone on a desert island. Using nothing but your bare hands, you start collecting resources like mud, sand and wood. You'll then start making basic tools such as pickaxes, shovels and axes to gather stronger materials like stone and coal. But you'd better hurry and build a shelter quickly, because nightfall will be here soon.And night is when the monsters come.

You'll then spend the entire night fending off spiders, skeletons, zombies and other assorted creepies who have just one objective: to send you to meet your maker. Of course, there's little heroic fighting on the first night. You'll spend it cowering in fear, in a small hidey hole of your own rough construction, with only the light of a small torch for company (if you were quick and resourceful enough to make one, that is). Soon, dawn breaks, and you're off exploring again-hunting, gathering, building and surviving. Like Tom Hanks in Cast Away, where he talks to a volleyball.

But there's a magic to Minecraft. The world is virtually endless, since it's procedurally generated, which means that it builds itself as you explore it.So you never run out of world. And once you get past the initial wimp-stage and get steel weapons to handle the annoying monsters, you're good to start doing some real building. And what fun it is! You can craft all sorts of tools- weapons, building tools, machines, dies, materials-and put them to use on brick-by-brick construction projects that are limited only by your imagination. You can build castles with towers that extend into the sky, fortresses that burrow deep beneath the mountains, entire villages made up of cosy stone and wooden homes, a life-size replica of the Starship Enterprise, a detailed model of the Reichstag, a cannon that shoots sheep towards the moon. Some people actually built all of these.

Minecraft taps directly into the human need for expressive and creative play. It's more toy than game (it lets you turn off the whole monster mode if you want to), like a huge virtual Lego world that you can disassemble and reassemble, blockby-block, into whatever you want. Combine that with the innate joy of discovery offered by a limitless world and hundreds of ways to craft new things, and you've got something that almost anyone will enjoy playing. Minecraft has sold over three million copies, and it isn't even out of beta yet.

There are other games that are rushing to cash in on the Minecraft craze. The most notable of these is the incredible Terraria. Terraria eschews the 3D world aspect of Minecraft in favour of a fully deformable, mineable 2D terrain. This makes it the Super Mario Bros to Minecraft's Doom chic. And thanks to its 2D platformer approach, Terraria gives you an even wider view of your world- and you can see it evolve and change as you shape it block-by block. Immensely satisfying.

Taking the basic gameplay of Minecraft- a day-night cycle with monsters, a limitless world to explore and gather resources, block by block building- Terraria offers a more expansive crafting system (you can even make laser guns if you get the right tools and ingredients), more interesting combat and some semblance of a story with demons and corruptions and stuff, while managing to stay impossibly cutesy. It's a winning formula, and is one of the most played games on Steam today.

The phenomenon is still growing. Fortresscraft, a Minecraft inspired game, smashed all sales records on XBox Live, becoming the top selling Indie game on the platform. Minecraft itself is due to land on iOS and Android soon, and will no doubt sell in the gazillions. But I can't help think that Minecraft had its genetic roots in that most hardcore of genres, the first-person shooter, and in particular, one of its most iconic objects-the humble crate. Plenty of early FPS titles had you shifting crates around and stacking them on top of each other in order to reach ventilator shafts (another legendary FPS trope) to crawl through. Sure, Markus Persson says he got the idea from Infiniminer, Dwarf Fortress and Dungeon Keeper, but perhaps the guys who built Infiniminer were moving blocks around in Half Life when they got the idea? Who knows?

But the lovely thing is this-just when you think that game developers are running out of ideas and resorting to "sequelcraft", something like Minecraft comes along and brings with it the winds of change. Sure, we're going to see nothing but Minecraft clones for a few months, but we're only a short while away from the next crazy idea that will transform gaming. Until then, do play and enjoy Minecraft. It's possibly one of the most important games to have come out in the last few years.