"If You Dress as Though Successful, People Take You Seriously" 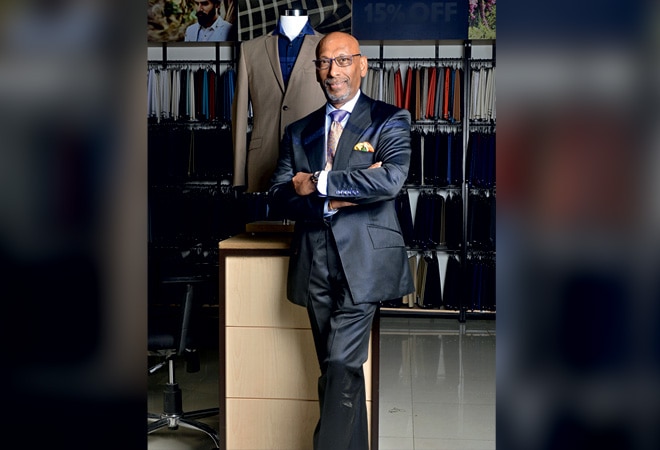 Andrew Ramroop, one of the worlds finest tailors who owns Maurice Sedwell, the British clothing company established in 1938

He has dressed iconic personalities ranging from Princess Diana, Cabinet ministers in the British Parliament, Lakshmi Mittal to Hollywood stars. However, Andrew Ramroop, one of the worlds finest tailors who owns Maurice Sedwell, the British clothing company established in 1938, says he derives maximum satisfaction in styling captains of the corporate world who feel it is important to project the right image to look successful in their businesses. "It is aspirational to be successful, but if you dress looking as though you are successful, people take you more seriously," says Ramroop, who is also the founder of the Savile Row Academy. An Advisor at Raymonds Tailoring Advisory Board, the master tailor was in Mumbai earlier this year. In a conversation with Ajita Shashidhar, he talks about his journey on Savile Row, the Mecca of bespoke tailoring in London. Excerpts:

How did you make your way to Savile Row?

I am from a humble, poor family in Trinidad. My father did all sorts of odd jobs -a cleaner, gardener, car park attendant. He used to also sell rum illegally to make ends meet. My entrepreneurial trait came from seeing him do different things. I didnt want to go college and I tried hard to fail my exams. Its 53 years since I have been a tailor. When I was about nine-years-old, I cut pillow cases into the shape of a pair of trousers. So, basically, we got a rectangle and I just cut down in the middle. I had always heard of Savile Row. Like a young athlete wants to run in the Olympics, I always wanted to be in the Mecca of tailoring.

My father gave me my first dollar when I was 12 and I saved all the money I could till I was 20 and bought a ticket. I didnt sail to England or Europe, I sailed to Savile Row because that is where I wanted to go. I got a job at Huntsman & Sons on No. 11 Savile Row, but I was kept in the backroom. I felt if I wanted to get ahead in my career, I need to have formal training in Savile Row cuts, tailoring and customer relations. So, I signed up at the London College of Fashion and did a three-year degree. However, the degree didnt really get me a job until the Principal of London College of Fashion recommended me to Maurice Sedwell. Thats how my journey with Maurice Sedwell began. I went on to buy 45 per cent of the company in 1988 and eventually owned it.

Who are the rich and famous people you have styled?

It is a very confidential business. My suits start at Euro 6,600; they are not cheap. Therefore, certain people dont want to know where they buy their clothes from. However, Lakshmi Mittal will be pleased if I mentioned his name. He passed by my shop one weekend and he saw what I was doing from the window. Sometime later, he returned as a customer. I have also dressed Princess Diana. In Hollywood - Samuel Jackson, an African-American star, comes to us, also older names such as Tony Curtis and Charles Grey. I have dressed 20 MPs and six cabinet ministers of the Conservative Party.

When a CEO comes to you, what exactly do they want?

If I went to an expert architect, I go to him for his service. So I would give an idea of what I want. I will tell him that I want a home with a pool and everything else. Then he would bring my ideas to life. Similarly, when a CEO comes to us, we pretty much know what they want in a suit. But there are casual and business suits. We ask a lot of questions and make the person the designer. They would say they dont know how to design, but yes, they do. I would ask do you want a business suit, do you want single breasting or double breasting, do you want step collar, pin stripe or plain...we keep asking questions and from what I understand is that they themselves design the suit, as they are taking decisions. So, what am I doing? I am designing in my mind whats right for you, I want to make it so personal that based on the response you give me, I create something exclusively for you. I never follow fashion books. We have a four-month waiting list, we do at least two-three fittings.

When someone chooses a cloth, I often ask why they chose that. I always challenge my customers, and when you challenge customers like that, they know you are interested in them. My business is customer-driven.

How would you style a woman CEO?

I dont like women wearing suits as thats just a female version of what a man would wear. They get to the boardroom by virtue of their ability, not because they are women, so, I want them to express their femininity rather than dressing up in a pin-striped dark suit and look like a man. So, I would choose more interesting colours and designs. With my tailoring background, I can be a lot more creative with womens wear.

What would be the one corporate dressing tip that you would want to give?

Express a subtle image that is important to you. If that helps you to be successful then thats the right image for you. You can wear a suit to a business conference, designers have tried to create an alternative to business suit, but a business suit helps make you look like you are dressed for business. I would say dont wear a tie, as it gives you the balance between casual and being formal. You can take a tie and put it in your pocket. If your casual look doesnt fit the environment, you can put it on. If a lady wants to be dressed formally for business, she should not wear trousers, but a skirt or a dress. If a suit gives the image of business, then make it a feminine suit.

What according to you is the most apt dress code?

There is lot of confusion with dress codes in business now because there has been lot of down dressing. The confusion comes from you running a business and being a client or customer. So I dress up to see you and you are very casual. The next time we meet, you dress up and I am very casual. That confusion has come in. I believe in standing your ground and expressing yourself. It actually gives a message about who I am and this is how I like to present myself and you will find everyone else elevating to your standards. Over 95 per cent of my customers are not Hollywood stars, they are CEOs who appreciate the value of presenting themselves.

The head of CIA was promoting one of his staff, and he asked the staff who makes his suits. I had been making his suits for many years. So, the CIA chief came as a customer himself. The head of CIA was not just promoting his staff, but recognising how well dressed he is and thinking that this is a person who will represent us well, speaks volumes.

What do you think of sari as formal wear?

One can look most amazing in a sari. In India you are getting a little too westernised. I think you should express your tradition, your values and your history. If you look at the labels, there are Italian, American and many others, but where is the Indian international label? Why is it that people here are adopting what everyone else is doing around the world? You get the diaspora wearing saris, men wear sherwanis only for weddings, but you have not been able to export who you really are. An expression of who you are is so important.

"Each Speyside Whisky Tells a Unique Tale of History"

Living on a High