Of late there wasn't much to differentiate HTC's Android smartphones. Most of them looked similar with the only difference being their different display sizes. Surprisingly, there is something charming about the latest entrant, the Rhyme. 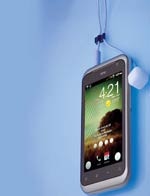 Of late there wasn't much to differentiate HTC's Android smartphones. Most of them looked similar with the only difference being their different display sizes. Surprisingly, there is something charming about the latest entrant, the Rhyme. A small accessory named 'Charm' included in the box is sure to become a hit with the girls. This cube-shaped white accessory is designed to notify incoming and missed call and even SMS. It plugs into the phone's 3.5mm jack and lights up when any of these actions takes place. So when the phone is in the handbag, the Charm can hang out and alert it owner. But it has its share of letdowns. With just one 3.5mm jack on the phone, you have to decide whether you want to listen to music or let Charm do its job. Also, when the 'Charm' is connected, the loudspeaker turns off, assuming that the headphone is connected to a headphone. The Rhyme should have been clever enough to judge that, after all it's a smartphone.

Complementing the 3.7" capacitive display is the unibody design. The front looked neat whereas the back was divided into three with plastic at the top and bottom and metal in the middle. Inside the robust casing is a 1GHz processor with 768MB RAM and 1GB of storage capacity. Connectivity options included the regulars - 3G, Wi-Fi, Bluetooth, A-GPS and FM radio. Starting the handset prompts for Google Account details and once configured it automatically linked us to Google Talk, Search, Gmail and Android Market for downloading apps. The HTC Sense UI divided the main menu into apps, frequent and downloads. What disappointed us was that the 5MP camera does not save images on the internal memory. It even fails to capture images in case the microSD card is missing. However, the camera results were impressive in daylight. Even the battery was good, giving us a whole day on heavy usage.

MUSIC BAND
There have been quite a few Bluetooth headsets available in the market that gave you the cordless experience. But none has been as attractive and classy as the Jabra Halo 2. Unlike other traditional over-the-ear headphones, this one doesn't have big ear cups. Instead, this sleek and slim unit, resembles a broad hair band with the rectangular extensions, which are actually the ear cups. Well padded from inside, the Halo 2 is very comfortable to wear.

The Halo 2 is also a great design, for not many controls have been placed on the headband except for the physical circular key and touch sensitive volume controls on the right. The key has multiple-functionality as it answers and disconnects the call and while playing music it can be used as a play/pause button. A double tap on the volume controls changes the tracks. And to turn off the headset, all yu have to do is to fold the head band.

This also makes it easy to carry. Snapping it back into position restarts the unit. The Halo 2 is easy to pair with other devices and has a sound quality that is rich and clear. Although Jabra claims to have added noise cancellation, the sound output wasn't very clear in noisy surroundings. The battery backup was close to 7 hours with a mixture of music and calls. For a wireless device, the Halo 2 comes with a wall charger, USB cable and a 3.5 mm connecting cable.

Some time back, there was a virtual deluge of smartphones with dual core processors from leading names such as Samsung, LG and HTC. The latest to join this league is Micromax with its very affordable A85 Superfone, an Android smartphone with 1GHz Tegra 2 dual core processor. Considering the hardware on previous Micromax phones, we didn't have high hopes from the A85. But this indigenous smartphone proved us wrong. Heavy to hold, it doesn't have cheap plastic at the back. Instead, the slightly covered metal back makes it easy to hold.

The controls have been neatly tucked away on the sides of the 3.8-inch bright, capacitive display. Micromax has added a customized user interface on the device which failed to impress us. Replacing it with the Launcher + did the job. Unlike the other Android smartphones, this one had a lot of pre-installed applications. These included AccuWeather, BSE/NSE Stock, Android Booster, Teen Patti, Quikr Classifieds, Nimbuzz etc. Another application that caught our attention was Gesture Setting that allowed us to scroll through the gallery by waving our hand over the phone's camera. However, this application is yet to be perfected as was obvious from the results. The overall speed of the device was impressive, though it did get stuck a few time. The overall performance was spoiled by the below average battery which could give hardly seven hours with a few calls, messages and little bit of web browsing. 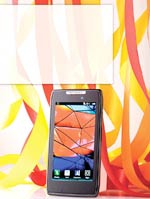 Remember the good old Moto Razr that sold for ages? Motorola has brought the Razr back with an all new look and functionality. Instead of a clamshell, the new Razr is a sleek 7.1-mm phone with a huge 4.3-inch capacitive touch display. The earlier tag feature phone has now replaced with the Android smartphone. The new Razr too can stand out in a crowd, thanks to the premium material and stainless steel chassis used in the design. Plus, the spillproof coating over the internal components saves the phone in case of any mishaps. The back cover cannot be removed and the micro-SIM slot has been given on the left panel. The power, HDMI and 3.5 mm ports are on the top. The vibrant, super AMOLED advance display manages to compete with the Samsung Galaxy S II. The main application launcher menu comprised the regular Google services, as well as a handful of other apps like QuickOffice.

Users also have the option to install MotoCast, an application that allows transfer of videos, images, music and documents over the air, without syncing the PC and the phone. We took some time to adjust to the QWERTY keypad as initially, we often ended up typing wrong alphabets. The unlock screen gives direct access to camera while turning off the sound. However, the 8 MP camera is a bit of a spoiler. Images captured had a lot of noise and while those taken indoors were mostly dark. The results of the full HD video capture were a bit better. Competing against the new dual-core processor smartphones, even the Razr has a dual-core processor clocked at 1.2GHz. In addition, the company has added 1GB RAM along with all connectivity options including 3G, Wi-Fi and Bluetooth 4.0. With the huge 1780 mAh battery running under the hood, the Razr managed to last a day and a half on auto-brightness along with extensive calling and data connectivity.