Near Field Communications: A technology primer

Nidhi Singal
Not long ago, only a few had heard about NFC, or Near-Field Communications. But all of a sudden, this technology has become the new buzzword in the mobile space. Everyone seems to be talking about NFC, but not many even know what it means or what is it capable of doing.

Near Field Communications is a promising technology that establishes connection between two similarly enabled devices over a radio frequency, but only within a close range of less than 4 cm. In other words, NFC acts as an enabler negating the need for any programming to pair the devices with each other. Instead, any two NFC enabled phones or a phone and an NFC-enabled tag can pair by just tapping against each other.

The technology has been around since 2004, but it is only recently that it has become available on devices and handsets. All this while, some of the biggest names technology in the industry have been perfecting the technology. Now, it has become the next big thing in the mobile sector with a wide range of applications from from content transfer to mobile payments.

As the technology operates in a very limited range, it is ideal for secure transactions. NFC is already being put to use for low-value shopping transactions in many countries. If the initial implementation is successful, there could be a time when our mobiles will also act as our digital wallet, letting us pay for anything from travel to food and movie tickets by just tapping the device against a programmed NFC tag. There is also wide scope for NFC in the healthcare sector as records of a patient's history can be stored in an NFC tag which can be accessed by medical professionals-again at a tap. Till then, however, NFC is being used for instant pairing of two devices for sharing small amounts of data (close to 100 kb) and for initiating larger transfers of contacts, photos, videos or even multi-player gaming via Bluetooth.

PROJECTS, IMPLEMENTATION…
NFC is now at a very nascent stage, especially in India, mostly due to the lack of an enabled eco-system. Some countries have already graduated to this technology, and is putting NFC to use for daily activities. Pilot projects being run around the world are experimenting with using NFC for enabling public transportation and for contactless payment systems. Sometime back, the Clarion Hotel in Stockholm ran a pilot project where the guests were given NFC-enabled phones to check-in, enter their room and even checkout of the hotel.

But this involved a lot of work at the backend and the hotel had to work closely with the access control company, mobile network operator, room door key specialists, etc. Guests simply had to download the application and use it while stepping into the hotel. The eight-month trial had fruitful results, especially by cutting the time for check-in at the reception. In San Francisco, NFC is being used to make parking meters smart. All 30,800 parking meters in city will soon have NFC stickers using which drivers will be able to pay for a slot for a given time period using their NFC-enabled phones.

Another pilot project in Austria empowered nearly 20,000 NFC phone subscribers to tap contactless chip tags at some stations of the Austrian National Railway and Vienna Metro. This automatically initiated the mobile ticketing application and filled in the needed information. Users used to confirm and receive the tickets via SMS or mobile Internet. A similar project in Germany's Frankfut allowed users to tap their NFC phones or scan 2D bar codes on posters in trains on some metro lines to access scheduling updates along with list of restaurants that accepted discount card programmes.

After embedding NFC in its Android Gingerbread, Google was keen to introduce its Mobile Wallet, a payment system that allowed users to store credit card details, loyalty cards, gifts cards and even promotional codes on their phone. The data could be used to make secure and simple payment by tapping the phone against any PayPass-enabled checkout terminal. Demonstrated in early 2011, the application has been made available only for Sprint Nexus S 4G at the moment. In the coming months, a lot of terminals will be introduced across US. Google also plans to introduce Wallet to non-NFC enabled phones by attaching an NFC stickers associated with just one credit card.

TAPPING INTO INDIA
Even India has had its share of NFC trials. A couple of years ago, CitiBank introduced a field trial with the Nokia 6212 Classic phone in Bangalore. Called 'Citi Tap and Pay', Citibank MasterCard Credit cardholders were given the option of buying the Nokia device which would come preloaded with the application that allowed them to make payments while receiving promotional offers and discounts. In Hyderabad, Megasoft Ltd's subsidiary XIUS announced an agreement with Tata DOCOMO where the latter would test XIUS' Mobile Touch Transaction (MTT) solutions to enable subscribers to execute anytime, anywhere recharge, bill pay and download other VAS services.

In 2011, Nokia introduced NFC-enabled devices on the Symbian Belle platform and tied up with the movie Ra.One to create a unique and engaging experience. The 'Just Tap with NFC' campaign allowed users to visit the nearest Nokia Priority and tap their phones against the Ra.One NFC tags to access free movie content. Nokia has also introduced NFC enabled accessories to add value to its smartphones. And Nokia is not alone. BlackBerry too has brought to India a bunch of NFC-enabled phones.

RIM is also working on an NFC-enabled application named BlackBerry Tag. "NFC is gaining popularity globally as it can be used widely in enterprise and consumer space. While NFC is already been used in e-commerce, social networking and sharing data between devices globally, it is still in a nascent stage of adoption in India. NFC as a technology is great for consumers as well as enterprises, but in a market like India the biggest challenge is infrastructure readiness for such technology to be adopted at a large scale. Especially, banks in India are yet to be equipped with technology facilities that would help augment e-commerce using NFC technologies," says Ranjan Moses, Carrier Product manager of Research In Motion. There are some other issues too. For instance, at the moment, one cannot pair a Nokia with a BlackBerry phone over NFC. However, NFC promises to soon because an abbreviation that will be in common usage along with USB and LED. 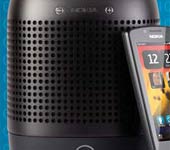 If your handset is not NFC-enabled, it doesn't mean that you will not get your share of the technology. If there is no NFC chip in your phone, it can be enabled using an NFC-enabled tag, SIM card or memory card. But access to the technology in this scenario will be based on the applications. "Eventually, dongles or similar devices may be available to enable NFC in devices that lack the technology. But consumers who want to get the full benefit of NFC will have to upgrade to new devices that have the technology integrated within them," explains Dino Bekis, Senior Director of Marketing for NFC products at Broadcom.