How mutual funds launched before 2000 are performing

As the year comes to a close, we look at the recent performance of some mutual fund schemes launched in the 1990s. While some of these funds continue to be high on the ratings chart, some have shown a fall in performance of late.

Dipak Mondal / Money Today
If we say that HDFC Top 200, Reliance Growth and SBI Magnum Tax Gain are household names, it'll be an exaggeration. But to say that these funds have made many people millionaires in the last 15-18 years is not an overstatement.

These funds have delivered very good returns over the past one-and-a-half decade and continue to do well despite hitches on the way.

As the year comes to a close, we decided to look at the recent performance of some mutual fund schemes launched in the 1990s.

With the year coming to a close, we listed equity and equity-oriented hybrid funds launched before 2000 and then narrowed the list to funds that have given 15% or more annual returns since launch. To prune the list further, we removed funds that managed less than Rs 500 crore on September 30. This left us with 22 funds from 10 mutual fund houses.

ALSO SEE: How to assess new funds in the market We then checked how these funds have been rated by Value Research every quarter starting January 2007. While fund houses such as HDFC, Franklin Templeton, Reliance and SBI dominated the list , schemes from ICICI Prudential, DSP BlackRock, UTI and Birla Sun Life also made their presence felt.

While some of these funds continue to be high on the ratings chart , some have shown a fall in performance of late. A few others have managed difficulties of the last five years well and regained glory after a spell of ordinary performance. Our list also includes funds such as Birla Sun Life Tax Relief '96 and Franklin India Prima which have continued their ordinary performance throughout this period.

The funds launched before 2000 manage Rs 1.90 lakh crore, which is one-fourth of the total industry AUM at the end of September 2012.

How did these funds, despite the cyclical nature of equity markets, manage a stellar performance?

And then there are funds which were the shining stars but have lost their sheen over the last three-five years. We look at some of these funds and their performance during the last five years. 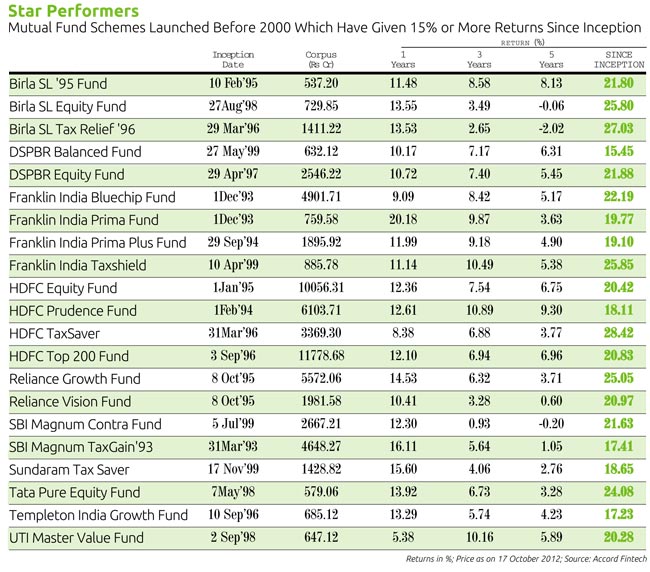 SBI Magnum TaxGain '93: Launched in 1993, the fund has been a top performer for years. This is evident from the Rs 4,500 crore it manages, the largest assets under management, or AUM, of any fund in the tax-saving category.

By returning 17.5% a year since launch and over 32% in the last 10 years, it's performance is the envy of many. But it has of late struggled to come anywhere close to its long-term returns. In the five years to November 9, it has given an abysmal return of below 1% a year, and is ranked 15th in the category on the basis of returns. In the last three years, it has returned 5.2% a year, 26th best in its category.

The slump is reflected in the fund's ratings. It was rated five-star in the March 2009 quarter. Within a year, it lost its sheen and was rated three-star, which it has maintained ever since. A good fund management process ensures that the scheme sticks to mandate, working to deliver superior long-term returns: Chintan Haria
One positive, though, is that it has been able to consistently beat its benchmark, the BSE 100 index, in terms of three-year rolling returns since April 2012. However, it continues to trail peers.

Reliance Growth Fund: This fund has given 25% annual return since its launch in 1995. It is one of the largest equity fund with AUM of Rs 5,500 crore.

This mid- and small-cap fund returned 33% a year in the 10 years to 9 November 2012, the second-best in the category after Sundaram Select Mid-cap.

However, the recent slump, particularly since the start of 2011-12, has investors and analysts worried.

In the five years to November 9, it has returned 3.25% a year, as against the category average of 2.2%. It is ranked 12th in the category in five-year returns.

A Morningstar report says the fund's asset size is limiting its potential. Allocating so much money to quality mid- and small-cap companies is difficult. With peers such as IDFC Premier Equity, SBI Magnum Emerging Business and ICICI Prudential Discovery Fund, Reliance Growth needs to improve its performance significantly.

SBI Magnum Contra: The fund has given a return of 22% a year since its launch in 1999. A contrarian fund that 'aims to invest in undervalued stocks which are out of flavour but have the potential to show attractive growth in the long term', SBI Magnum Contra invests heavily in large- and mid-cap stocks. We stick to basics, ignore momentum stories, and focus on building a portfolio of companies creating value for shareholders: Sivasubramaniam KN
The recent performance, however, leaves much to be desired. The fund has given 0.2% a year over the past five years, underperforming 74% schemes in the category. In the last three years, it has generated just over 2% annually, and is ranked 58th in the category.

It was rated five-star at the end of the September 2009 quarter. Three years later (September 2012), it declined to two-star.

The scheme got a new fund manager, R Srinivasan, in June 2011. However, it hasn't made much difference yet. Investors should stay away from the fund unless it shows a marked improvement in performance.

Reliance Vision Fund: The fund, which completed 17 years recently (launched in October 1995), has delivered a mediocre performance in the last three years. A giant of yesteryear, it has given 21% annual return since launch and 27% over the past 10 years.

It manages Rs 2,050 crore. However, as with many other old-timers, it has been struggling to live up to its high standards of late. In the five years to November 9, this large- and mid-cap fund has returned 0.60% a year compared to the category average of 2.2%. It underperformed its benchmark (BSE 100) during the period.

It has given 3.28% return annually over the past three years as against the category average of 5.76%. Its rating fell from five-star in December 2006 to three-star three years ago. Existing investors may wait a little before exiting but new investors will be better off investing in other funds in the category.

Birla Sun Life Tax Relief '96: Despite its mediocre performance in the past five years, the fund has delivered 27% annual return since its launch in 1996 and 23% over the past 10 years.

This, however, doesn't give it a hall-of-fame status, as performance has recently become worse with rating falling to two-star. It has eroded investors' money by over 2% annually in the past five years while managing to generate a miserly 2.5% a year over the past three years. During these periods, the category average return was 1.2% and 6%, respectively.

It has also underperformed its in-house peer, Birla Sun Life Tax Plan, in five- and three-year periods. It's clearly an 'avoid' unless the fund manager (Ajay Garg since October 2006) does some smart portfolio management.

Sundaram Tax Saver: A five-star fund not so long ago (last rated on September 2009), its performance has gradually declined vis--vis the category average in the past three years.

What has queered the pitch is the performance since 2009. The fund failed to beat the category (tax saving) average by two percentage points in the three years to November 9. It could give only 4% a year as against the category average of 6% and the benchmark return of 3.69%. The fund has been managed by Srividhya Rajesh and J Venkatesan since January this year. Since then, it has given 29% return against 25% category average and benchmark returns.

It's yet to be seen if the 2012 performance can revive the fund's fortunes.

HDFC Tax Saver: It may not fall entirely in the category of funds whose performance has slumped badly over the years, but knowing that it was once a five-star fund and was recently downgraded to three-star, we thought it would be fine to analyse it in detail.

Launched in 1996, HDFC Tax Saver is one of the most popular schemes in the tax-saving category with AUM of Rs 3,200 crore.

The fund has given 28% annual return since launch, easily beating the benchmark S&P CNX 500 index, which rose 14% a year during the period. This is the highest return since launch among funds launched before 2000. In the past 10 years (as on 9 November 2012), the fund has managed to generate almost 30% return annually, second only to SBI Magnum Tax Gain '93 in this category.

However, the scheme's performance recently has been off the mark. In the five years to November 9, it has generated just over 3.5% a year, and is ranked 9th in the category. In the past three years, it has risen 6.5% annually, 20th in its category. Its rating have fallen from five-star on December 2010 to three-star at the end of the September 2012 quarter.