Global funds are a good pick given their current underperformance, but research well on the country and currency risks. 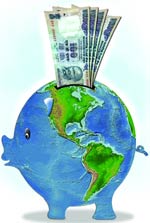 The Indian markets have delivered stupendous returns in the past five years, with the BSE Sensex giving compounded returns of 22 per cent per annum compared to the world average of 1 per cent. Having said this, India is not the only market to have performed well. Emerging markets, such as Brazil, Indonesia, China and Latin America, have done even better. Surprisingly, among the developed economies, Japan, a long-time laggard, was the best performing market in March this year. The country posted gains of 9.5 per cent compared with an average growth of 5-6 per cent registered by global markets. Clearly, individual market performances aren't consistent and, hence, diversifying across geographies could reduce the chances of skewed returns.

Here's another compelling argument: India's total market capitalisation stands at around 3 per cent of the world market cap. By sticking solely to Indian stocks, you could miss out on 97.3 per cent of the opportunities that exist elsewhere. To capitalise on these, most Indian fund houses are offering funds that invest globally. You can choose to either invest directly or take the fund of funds route, which is managed by the local country experts. If you are a firsttime global investor, you could opt for funds that make small allocation in foreign markets. Take ICICI Prudential's Indo Asia Equity Fund, a star performer that has more than 65 per cent of its assets in Indian equities. It has invested its global portfolio (~33 per cent) in the IOF Asian Equity Fund, which is managed by Prudential Singapore and has an exposure to various markets, including China, Hong Kong and Korea. As Sankaran Naren, CIO, ICICI Prudential Mutual Fund, who manages the Indian portion of the fund, puts it, "It is a question of expertise in the markets."

A similar story plays out in several other 'global' funds like the Templeton India Equity Income Fund or the Fidelity International Opportunities Fund. Though this offers a tax advantage to investors, think zero long-term capital gains since funds with over 65 per cent exposure to domestic funds are treated as equity funds and you get only a small exposure to the global markets. Defending this strategy, Naren says it works well for the novice investor who wants to get a flavour of the global market before making larger allocations.

On the other hand, global funds like the Tata Growing Economies Infrastructure Fund allow the investor to choose between a fund with a higher proportion of global equities and one with a stronger India focus. The fund's Plan A invests up to 70 per cent of its assets in infrastructure companies outside India, while Plan B invests more than 65 per cent in Indian firms. There is a difference between the fund performances as well. Plan B has generated around 70 per cent returns, while Plan A delivered around 56 per cent in one year. In fact, in the past one year, funds that have predominantly invested in Indian equities have fared better than those with a higher global representation. This is mainly because India has outperformed most economies in the same time frame.

India is the second most expensive market globally, trading at a PE of 17x forward earnings compared to the MSCI World Index PE of 14x. According to Naren, this is probably the best time to be bullish on international funds, especially because they have underperformed significantly. Adds Gaurav Mashruwala, a certified financial planner (CFP): "Though Indian investors are diversified across all asset classes, be it real estate, gold or equities, they are exposed to a single currency, which is a high-risk category. If something were to happen to the rupee, the entire portfolio will get disturbed."

Then there are the thematic funds, be it commodity, agribusiness, precious metal or oil funds. Be warned that these require some amount of research on the relevant theme before investing, say, on the fortunes of the oil companies in Russia. To start with, experts say that one should ideally choose a relatively well-diversified fund, which invests across sectors anywhere in the world. According to Suresh Soni, managing director, Deutsche Asset Management, a retail investor could allocate up to 15 per cent to global funds. He recommends a sub-allocation to focused funds like the DWS Global Agribusiness Offshore Fund. This enables you to gain from the alpha generation by the fund while insulating you against a rise in food prices, claims Soni. Considering that India has limited listed opportunities in the agri sector, such a feeder fund works well. On the flip side, this space attracts activities by hedge funds, which can hurt performance. Also, as is true for any thematic fund, it's better suited to investors willing to make a concentrated bet.

Though most global funds have a limited performance history (except the Principal Global Opportunities fund, which hasn't been encouraging), experts opine that much of the performance is going to be driven by Asian and emerging markets. These include Brazil, Russia, China, India, Korea, Taiwan, Mexico, Hungary, Indonesia and Malaysia, to name a few. Asia, according to fund managers, remains a very promising investment destination due to its strong economic fundamentals, one of the highest savings rate and an increasing global interest, which boosts capital formation. Also, the Asian market is not dependent on any single theme unlike, say, Latin America, which is basically driven by commodities. Asia offers maximum diversity by combining various themes like services, manufacturing and finance. According to a fund manager at Tata Mutual Fund, emerging markets are a good bet since they have better balance sheets, current account surpluses, good foreign exchange reserves and a low debt to GDP. When most of the developed world plunged into recession, many emerging economies saw their GDP ticking upwards. In fact, Tata's Growing Economies Infra Fund has been able to leverage the good performance over the past year-and-a-half due to its exposure to Latin and emerging European markets. Economies like the US and Europe could also offer some value plays since stock prices are far below their historic highs. Citibank, for one, is available at $5 a share compared with its peak of $55.

Investing in the American market will soon become easier as the National Stock Exchange begins trading in futures contracts of the S&P 500 and Dow Jones Industrial Average, two of the world's most influential market indices. Recently, Benchmark has also launched the Hang Seng Exchange Traded Fund (ETF), which invests in a basket of companies listed on the Hong Kong Stock Exchange. Though the ETF could be a cheaper route of investing with no fund manager risk, you could also lose out on the alpha generated by an actively managed fund.

Now for the fine print. Before investing abroad, understand the market risk as well as the country and currency risks involved. So, an exposure to countries like Portugal or Greece, which are mired in financial woes, could significantly affect your returns.