In spite of the ups and downs, the portfolios have managed to regain strength. In the last quarterly review in June, two of the portfolios, Wealth Maximiser and Money Builder, had negative returns. Both have shown profits this time.

The quarter one results are out. However, the companies have many concerns. The results announced so far indicate moderation in sales growth. Operating profit margins have continued to contract. A weak demand, margin pressures, high interest rates and the continuing global slowdown seem to be troubling firms as well.

GDP estimate has already been downgraded by RBI to 6.5 per cent for the financial year 2013. A negative IIP growth for June 2012, at -1.8 per cent, added to the overall sluggish growth curve.

The markets managed to register gains despite these concerns, due to liquidity, which continued to flow in from FIIs. However, Kotak Securities in a recent release said that reforms are a pre-requisite for the markets to move up. If this doesn't happen, there will be downgrading and fund flows may dry up. 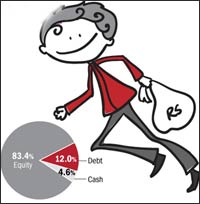 Wealth Maximiser
Click here to Enlarge
In spite of the ups and downs the portfolios have managed to regain strength. In the last quarterly review in June, two of the portfolios, Wealth Maximiser and Money Builder, had negative returns. Both have shown profits this time. The other two conservative folios, Stable Growth and Income Generator have shown an improvement.

The July inflation eased to 6.87 per cent as compared to 7.25 per cent in June. This is a six month low and can encourage the Reserve Bank to revisit its monetary policy and cut its key policy rates further. That would definitely give some momentum to the market. An interest rate cut will also be positive for the rate-sensitive financial sector where our equityheavy portfolios have highest holdings. 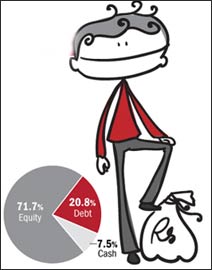 Money Builder, Stable Growth and Income Generator
Click here to Enlarge
The monsoon has been poor till now. A recent analysis from Emkay Global Financial Services estimates a 15 per cent deficiency in monsoon will imply around 10 per cent decline in food grain production and a negative agri GDP growth at 1 per cent to 1.5 per cent. The report predicts a severe setback to the services sector growth if the deficiency is more than 15 per cent.

Healthcare was the major gainer among sectors followed by Consumer durables and fast moving consumer goods. Our two equityoriented portfolios have all the three sectors in the top five equity holdings and therefore would profit. But going forward, an inadequate monsoon would have an adverse effect on sectors such as FMCG, automobiles, fertilisers and agro-chemicals.

IT, power and capital goods were among the sectors that didn't fare well during the month. All the four portfolios have high holdings in these sectors. This was a setback and had a negative impact on the growth prospects of these portfolios.