Healthcare at AM Naik's Heart

The engineer, who headed Indias largest engineering and technology company for over two decades, decided to donate 75 per cent of his income to social causes Charity indeed began at home for L&T Chairman A.M. Naik. His father, Manibhai Naik, who was the principal of a school in a village in South Gujarat, had devoted his life to upliftment of poor children. His grandfather, too, was a school principal and a social worker. The engineer, who headed Indias largest engineering and technology company for over two decades, decided to donate 75 per cent of his income to social causes.

In 1995, when Naik was a mid-level manager with L&T, his father had requested him to arrange some additional beds and facilities for a hospital in the village of Kharel, Gujarat. Instead of using his corporate connections, Naik dipped into his personal savings and provident fund to offer Rs 4 lakh.

It was about 15 years later, in 2009, when Naik set up two trusts - the Nirali Memorial Medical Trust (NMMT; named after his grand-daughter Nirali who passed away at the age of two) for healthcare, and the AM Naik Charitable Trust for education and skill-building. "When we lost her to cancer, my family and I decided to turn our personal tragedy into a step that would benefit thousands of Niralis around the country."

NMMTs early projects included setting up an advanced radiation centre in Surat (inset photo), and mobile clinics. A couple of years ago, it set up a multi-diagnostic centre in Powai, Mumbai. The Trust is now setting up a healthcare campus at Navsari near Surat. It will have an advanced cancer hospital that will be run in collaboration with Tata Trusts, and will have facilities to offer close to 16,000 sessions of radiotherapy, 630 patient surgeries and 5,000 cycles of chemotherapy. The campus will have a 300-bed multi-specialty hospital as well that will be run by the Apollo Group. "Whatever service or facility we offer, we must be as good as the best in the world," says Naik.

Naik and his family directly head the Trusts activities. In this he has the active support of his children, who are settled in the US. "In the final analysis, a society and a community is going to be judged not by how greatly it helps the wealthy and the powerful but how effectively it responds to the needs of the vulnerable and the marginalised." Like a true-blue Indian, Indra Nooyi, former CEO of PepsiCo, had always been in love with cricket. While she is not known for her career in cricket, Nooyi's passion for the sport is well-documented. She was determined to start the first women's cricket team at the Madras Christian College. It was 1971 and eyebrows were raised but a resolute Nooyi got her way. Once her college started its women's cricket team, others followed suit.

The seam bowler took some valuable lessons from the pitch to the board room. Nooyi believes that the game showed her how to put her team first.

However, when she moved to the US in the late 70s, she could not pursue her passion. So she adapted and found a different pitch - baseball.

In 2018, the International Cricket Council (ICC) appointed Nooyi as the first independent female director. "I love the game of cricket. I played it as a teenager and in college, and to this day, I cherish the lessons the game taught me about teamwork, integrity, respect, and healthy competition," she said. 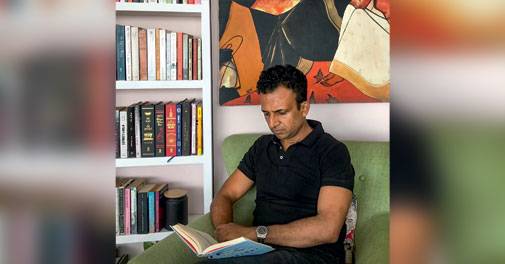 As a child, Sandeep Lodha, CEO of Oyo-owned Weddingz.in, was not into reading. His love for books started only after he started working. "A friend suggested that I read Shoe Dog by Phil Knight when I was toiling to set up my start-up. The book, which talks about how Knight created Nike, helped me deal with the stress. The book taught me how to ride through the initial challenges such as family pressure and rejection from investors," says Lodha.

Now, books on entrepreneurship - The Airbnb Story by Leigh Gallagher; Alibaba: The House That Jack Ma Built by Duncan Clark to Cold Steel by Tim Bouquet and Byron Ousey - keep Lodha motivated. "In 2016, we were a hand-to-mouth start-up. When demonetisation happened, we felt our business would shut, but we survived. In difficult times like these I look up to books and find ways to sail through," he says.

The spread of coronavirus yet again poses a challenge, but Lodha is in high spirits. His guiding light is the book on Alibaba by Clark, which talks of how Jack Ma made it through the SARS outbreak in China and the companys headquarters being quarantined right before the launch of e-commerce platform Taobao. "It's survival of the fittest. This is the time to be creative and evolve. Build a new business model so that once the lockdown opens, you emerge stronger and sharper," Lodha advises.