Sceptical families and juggling jobs were some of the problems Burman and Bhatia faced as they ventured into hospitality. 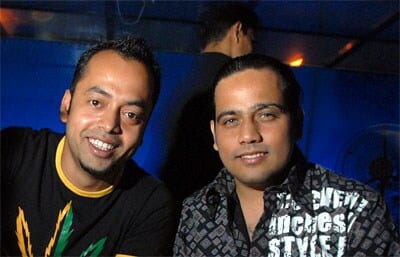 Remnants of a techie past find ample space behind the organza curtain on the second floor mezzanine office of Pankaj Bhatia and Khanindra Burman.

With bluetooth accessories tucked into their ears, fingers caressing the mouse even during conversations and laptops snugly fitted onto crowded desks, the new restaurateurs-on-the-block are still revelling in their latest avatar. Their new baby, The Beach, has just completed its first anniversary and etched itself firmly into the food and beverage map of Bangalore.

“The urge to be on our own was always there,” says Burman. “It was just a matter of time and finding the right niche.” The duo checked out a number of options, including starting a software company, before homing in on the hospitality sector.

Bhatia and Burman met on their first day of work at Hughes Technologies in Delhi; it was the first job for both of them. Writing codes and working on advanced programs took priority for the next few years, with both of them being sent to the United States on assignments. It was after they returned to India that Bhatia explored the possibility of opening a restaurant in Delhi.

“We kept discussing it because both of us were keen to venture out on our own and we liked the idea of a restaurant,” he says. However, the plan did not take off. In 2005, Burman moved to Bangalore; Bhatia followed soon after with an offer from Lucent Technologies. The shelved restaurant plan came up again and this time the friends decided to make a go for it.

The preparations took a few months. The first obvious hurdle was parents who were opposed to the idea of risking a well-paying job for the uncharted territory of business. “Both our fathers are bank managers and our families are wellsettled. It did take a bit of convincing but we managed,” says Burman.

A bigger problem was their lack of knowledge and experience in the hospitality field. “We knew that we were no experts but we had the confidence of learning on the job,” says Bhatia. The would-be entrepreneurs came to Delhi to source authentic kitchen accessories for a north Indian restaurant as well as recruit an experienced chef who would help them run the place.

“Indiranagar, one of Bangalore’s best-known localities, had very few authentic Punjabi restaurants, and we thought we would cash in on that,” says Bhatia. And so was born The Village in 2005.

With sceptical families and colleagues telling them about the pitfalls of venturing on their own at every step, it was only natural that adequate research preceded the inauguration of the first restaurant. “We spent months researching on how restaurants worked, spoke to managers and chefs. We spent every waking moment in some restaurant or the other before we started,” says Burman.

Not ready to gamble their jobs away, they worked part time at keeping the restaurant going. “It was very difficult; we had our day jobs and the evenings were spent at the restaurant, packing up only when the last guest left. But we had to make a go of it to be able to quit our jobs and take this on full time,” says Bhatia of the initial hardships. On hindsight they concur that working at two jobs was only one of their many problems. “We were in a city that we knew nothing about, neither the language nor the culture. We had to literally learn everything on the job, and we did,” says Burman.

The Rs 30 lakh that they invested in The Village came from their combined savings as well as a few personal loans from friends. The restaurant was so successful that when it was time to begin their second restaurant, The Beach, the investment of Rs 1 crore was far easier to find. “Earlier we had no credentials, and even though the people who have funded us are friends, it’s a business arrangement this time,” says Bhatia.

It’s a tough life for a restaurateur and both of them agree that the life of a high-flying software engineer was much easier. “We literally have no time to breathe, no personal life to speak of, and the only time we are not in the restaurants overseeing things is when we try to catch a few hours of sleep,” rues Burman. And, yet neither has any hesitation in adding that nothing beats the high of being independent. That the business has grown ten-fold in the past two-and-a-half years is an achievement in itself. The latest move includes a franchisee deal on The Village.

What brings them satisfaction is that their parents are finally happy about their success in the industry. “Even today it’s not about money. It’s about the fact that we have created an enterprise where we have more than a hundred employees and the fact that our business helps run that many families,” says Burman.

“I think it was our attitude that really mattered. We were positive from the beginning and it’s been a great learning experience,” says Bhatia. Learning was also in the form of handling people: staff, customers and business associates. Thankfully there have been no major rifts between them. “We have been friends for some time now and we understand each other,” explains Burman. While he looks after day-to-day operations, Bhatia handles the finances.

Future plans include opening two more restaurants this year besides venturing further into hospitality with service apartments and an entry into the luxury market with a new spa. “We are looking at markets such as Hyderabad. There are lots of plans but we’ll take it one step at a time,” says Bhatia. And every step so far has been something of a quantum leap.