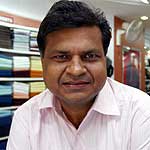 The first thing you notice is that his conversation is completely sanitised of business jargon. You don’t hear words like operationalise or incentivise. It is easy to understand when he says, “I visited the top cities across India to meet retailers and convince them to give shelf space to our products,” instead of the usual ones like, “I networked in this vertical”. It is clear that Vijay Bansal, managing director of Cantabil Retail, is not a regular entrepreneur wearing the badge of a B-school. With a bachelor’s degree in commerce from Kurukshetra University, he belongs to the pedigree that doesn’t care for the highfalutin, in its talk or work.

Perhaps this can be attributed to his father, who is a wholesaler of FMCG products in Haryana. His work does not have much in common with the business model of a manufacturing unit, but it made Bansal realise that he did not want to do a regular job. It also made him aware that he didn’t want to go through the grind that is routine for the non-salaried people — professionals, traders and manufacturers.

For seven years, Bansal learnt the tricks of the trade from his father, but he yearned to start a business of his own. “I wanted to diversify. It was the obvious next thing,” he says. A family friend had just opened a factory in Sahibabad that manufactured buttons and zippers. Bansal volunteered to tackle the wholesale distribution of its products across India. The manufacturers saw no reason to refuse and Bansal’s first company, Kapish Products, was born.

The new business meant a new operating centre: Delhi. Within two months, Bansal had set up an office in the busy lanes of Karol Bagh. It cost about Rs 7 lakh, which came from Bansal’s past savings. He built his team the traditional way: through advertisements and then through recommendations of the people he had dealt with. By 1999, he had employed 30 people across the country. Also, by this time, he had scoured several cities like Lucknow, Ahmedabad and Kolkata to find permanent customers for the products. As mentioned earlier, it was painstaking. “I realised that other wholesalers were not keen to buy from us. So we had to shift focus to small manufacturers of clothes,” says Bansal. Little did he know that he was soon going to give his new customers stiff competition.

Or perhaps he knew, because in hindsight, he claims to have been inspired by these very garment makers. The transition from wholesale to manufacturing would seem to be easy. There was much that Bansal could have enjoyed readymade—a successful team, a large network of contacts, an insider’s view of the business and the experience of handling a large-scale operation. But it wasn’t a cakewalk.

“I had to start all over again,” says Bansal. He handed over the wholesale business to his sister’s son and used none of its resources, except the profits. In 2000, when he finally quit, Kapish Products was generating an annual income of about Rs 10 lakh. How did his family react to this decision? “I was breaking fresh ground, but they backed me fully. I could afford to fail,” he says referring to the business he had given up.

If Bansal had wanted to diversify further, he could have chosen to sell other types of products. Why did he switch to manufacturing? “The biggest limitation of a trader is that he has no quality control. I had to sell, irrespective of how the product evolved. I did not have any say in pricing either. Most importantly, there was not much scope for being innovative,” he explains. Once he had decided on manufacturing, readymade garments seemed the most viable option, given his knowledge about the field.

The first range of Cantabil casual menswear was launched in 2000. At this time, corporate heavyweights such as Raymond and the Aditya Birla Group had already established brands like Park Avenue and Allen Solly. What was to be Cantabil’s trump card? “The price. We wanted to offer Van Heusen quality for less,” he says. In the wake of brand consciousness that gripped India, the strategy could work, provided Cantabil matched not only the quality of fabric but also the style of clothes offered by the bigger brands.

Given Bansal’s contacts, the former was easy. For styling the range, he collaborated with an Italian designer studio known to a close friend. Even though Cantabil now has an in-house design team, it still works with the Italian studio for colour and design forecasts for the fashion industry.

Initially, Cantabil did not set up its own manufacturing unit as it required too much capital. Though Bansal had taken a bank loan of Rs 50 lakh, in addition to his personal savings, money was scarce. Much of it was used to create a nationwide network of distributors. In fact, Bansal had to repeat his tour of the top cities of India, this time to meet the heads of multi-brand stores, instead of small manufacturers. Till 2006, when Cantabil launched its women’s wear, the clothes were made in contracted Delhi factories. “Every stage had to be supervised to ensure that quality was not compromised,” says Bansal. But the pain was worth all the money that the company saved.

For an ex-wholesaler, selling his own products should have been the easiest part. As it turned out, it was the most difficult. “We tied up with multi-brand garment stores to showcase our brand. The first range included about 5,000 shirts and trousers, but the response was tepid,” he recalls. The reason: no display for the clothes. “Out of about 15 varieties, only four to five were properly visible,” explains Bansal.

He never doubted the quality of his garments or his estimation of a market for less expensive branded wear. Bansal immediately changed his business model and decided to launch exclusive showrooms to market his brand better. It was a risky call—fixed costs like the rent of a store and the operating expenses range from Rs 30 lakh to Rs 75 lakh a month. But the gambit paid off.

Not only did Cantabil acquire recognition, but the showrooms built the brand’s reputation as a chic-forless option. Today, Bansal has 350 stores across India, 125 owned by the company and 225 on a franchisee basis. The product line has also expanded to include casual, formal and party wear for men, women and children. Last year, Cantabil launched another brand of readymade clothes, La Fanso, catering to the lower middle class.

After targeting the Nano and Indica buyers, are Bansal’s eyes trained on a range for the Jaguarhopping crowd? “No, I am happy with mass brands. I want to build a chain of 500 showrooms of Cantabil,” he says. The super rich have enough choices anyway.