Some lows are good

Experts are predicting that inflation will hit an all-time low. It is already down to 6.84% from 12.9% just four months ago. Is this a reason to celebrate? Rakesh Rai finds out.

The government has taken several steps to ease the liquidity and increase the money supply in the past month. But strangely, inflation is not going up like a balloon. Instead, the inflation rate has been coming down with every passing week. For the week ended 6 December, the inflation rate was 6.84%, considerably lower than the 12.9% level it had touched a few months ago. The papers are abuzz with reports that inflation will be lower in 2009 and attribute this to the ‘high base effect’. Till now, a low inflation rate meant 6-7%, which was also seen as RBI’s comfort zone. But now there’s talk of 0-1% rate.

The chairman of Edelweiss Capital, Rashesh Shah, says, “With falling commodity prices and economic slowdown, inflation will be near zero in certain periods of fiscal 2009.” Abheek Barua, chief economist, HDFC Bank, agrees. “The fuel price cuts and the excise duty cuts will impact the level of the wholesale price index (WPI). Given these two developments, we are looking at levels of close to 1.7-2% inflation by March 2009,” he says. RBI has also said that it will review its inflation target in the next monetary policy.

Isn’t this good news? We all know that a steep rise in the inflation rate eats away the value of long-term savings and investments. And, of course, there’s the resultant rise in prices. So a low rate of inflation will mean lower prices, right? Sadly, this is not necessarily true— and this is something we’ve said before. The inflation rate we look at is based on the WPI. “While the WPI has been falling, the consumer price index (CPI)-based inflation has been increasing and is yet to show signs of a decline. This is because the CPI-based inflation is dominated by food group inflation that is continuously moving up. Also, the weights of fuel group and metals, two major contributors to the softening of the WPI inflation, are relatively less across all CPI variants. Accordingly, the CPI inflation has risen in the past few months, contrary to the WPI movement,” says Siddhartha Sanyal of Edelweiss.

Many economists don’t agree that the inflation rate will fall to zero. Pronab Sen, chief statistician of India, says, “We can’t really say that we are completely out of the woods when it comes to inflation. Anybody who believes that inflation will fall below 3% or negative is indulging in wishful thinking.” Adds Amol Agarwal, economist, IDBI Gilts: “No worst-case scenario can be ruled out for the current times. We are seeing scenarios that few could have predicted.” What does all this mean for consumers and investors? We take a look at the pros and cons of a low inflation rate. 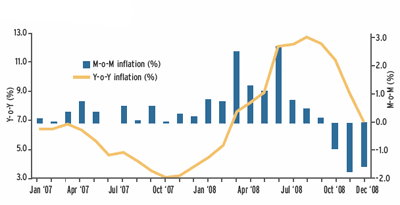 When inflation is high, the value of money gets eroded. When future prices are less predictable, sensible spending and saving plans are harder to make, and this affects the standard of living. Among those who lose out are savers because the capital value of their savings falls due to the rising prices and people who have their incomes fixed in money terms, such as pensioners.

A high rate of inflation also encourages speculative investments. In a bid to beat high inflation rates, many investors break long-term investments looking for higher returns, many of them not tax-free. It can also create the illusion of temporary financial success while masking fundamental economic problems.

Businesses and households are affected by rising costs and prices. Businesses, workers and investors respond to signs of inflation by pushing up prices, wages and interest rates to protect themselves. This can lead to a vicious circle of rising inflation. It also means that people relying on fixed incomes will face hardship as the money remains constant but prices go up.

So it’s almost a no-brainer that low inflation is the answer to all these ills. A lower rate of inflation will mean that consumers will be able to make better long-range plans because they know that their money is not losing its purchasing power year after year. It will also mean that interest rates are lower, encouraging investment to improve productivity and allowing businesses to prosper without raising prices.

THE BAD NEWS
Inflation is sometimes referred to as the cruelest tax, but this, some experts say, is more myth than fact. “A little inflation is not a bad thing and a world without inflation would be as brutal and unforgiving as high inflation. Most assets would decline in value and business profits would evaporate, along with any chance of gainful employment. The only people who would benefit would be creditors, and then too if they were lucky enough to find people who wanted to borrow their money. That would be doubtful since business and investment opportunity would be nil, providing little reason to be a borrower,” says Agarwal of IDBI Gilts.

If inflation were zero, or if prices were actually falling (deflation), business profits would fall too. After all, in a competitive economic environment, price gains normally tend to be limited. This forces businesses to earn money by cutting costs and being more productive. Labour costs would certainly be among the costs that businesses would want to reduce. Result: freeze on hirings and fall in individuals’ incomes.

Very low inflation is also a disincentive for production decisions and can delay consumer spending in anticipation of a further fall in inflation and dampen demand. If manufacturers and retailers reduce output and offer discounts, it could mean lower profits, curtailing expansion plans, and leading to lower pay hikes and job losses. While holders of government debt might benefit from low inflation rates, it places a higher burden on the government, which has to prepay the debt, prompting tax hikes and other remedies aimed at raising government revenues.

What about zero inflation, which some experts have talked about? “Zero inflation increases the risk of the economy slipping into deflation, and worse, a deflationary spiral,” says Lalit Thakkar, director (research), Angel Broking. Falling prices mean lower wages, lower productivity, leading to even lower wages, he says. A low rate of inflation, not 0%, however, provides a safety barrier. Deflation is also very hard for a monetary authority to correct. Interest rates typically cannot be offered at a negative rate.

WHAT YOU CAN DO
The benefits of moderate inflation (as opposed to nil inflation), for you as an investor, stem from the fact that at low levels of inflation, the real interest rate is still positive. However, depressed conditions may not allow you to benefit from low inflation. But you could benefit in the long run, provided you adapt to the new realities.

Equity investing: Equities are the best bet to overcome inflation in the long run. If you have the risk appetite, go stock picking, but take informed decisions.

Debt investing: Falling inflation is often accompanied by falling interest rates, impacting returns from fixed-income options. You will have to manage your debt investments actively. For instance, you can shift from gilt to bond funds or invest in high-rated company fixed deposits.

Expenditure and loans: While low inflation is unlikely to affect nondiscretionary expenditure like rents or fees, it does affect big purchases. As for leveraging debt, in case of long-term loans, like that for housing, inflation is a non-issue.

Salary: Apart from demand and supply, your salary hikes are linked to inflation. Sustained low inflation may mean lower increments. The inflation rate is an indication of the rise in the general level of prices over time. To arrive at a comprehensive inflation rate, we need to calculate the average change in the price of all goods and services traded in the economy. Obviously, this is not practical. So, a sample set or a basket of goods and services is used to get an indicative rate, and the prices are based on a price index—either the CPI (used in the US and Japan) or the WPI (used in India).

The WPI is based on a basket of 435 products, and the change in the prices of these products is used to calculate the inflation rate. For long, the accuracy of these figures has been debated owing to the constituents of the basket and the weights that they carry. Of the 435 products in the index, 318 are manufactured products, 98 are primary articles such as foodgrains and oil seeds, and 19 are fuel group items.

From January 2009, the basket is set to change, making the inflation data more accurate. Also, the WPI-based inflation data will be released once a month instead of once a week. The new basket will cover about 800 items initially and eventually include 1,224 items. The bigger basket and the new frequency of data releases is expected to make the WPI-based inflation rate the closest indicator to headline inflation, enabling policymakers and people get a better sense of inflation and its impact.